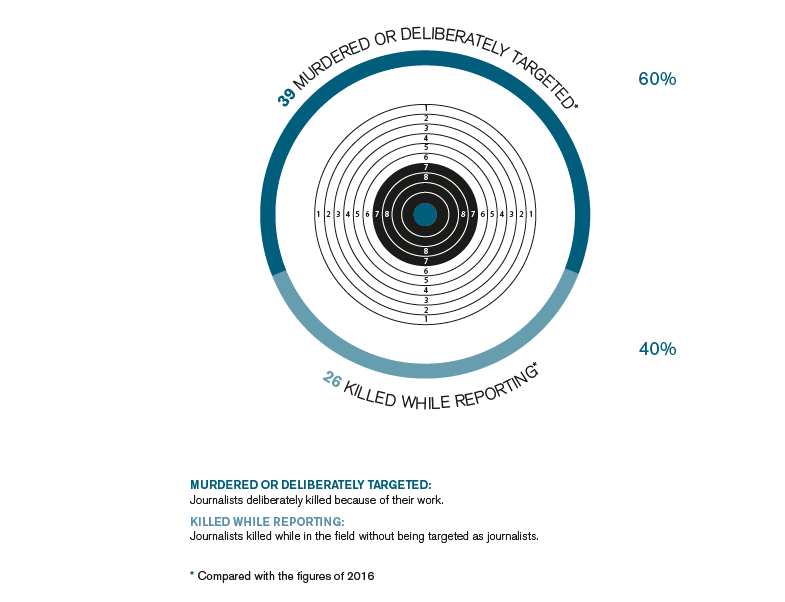 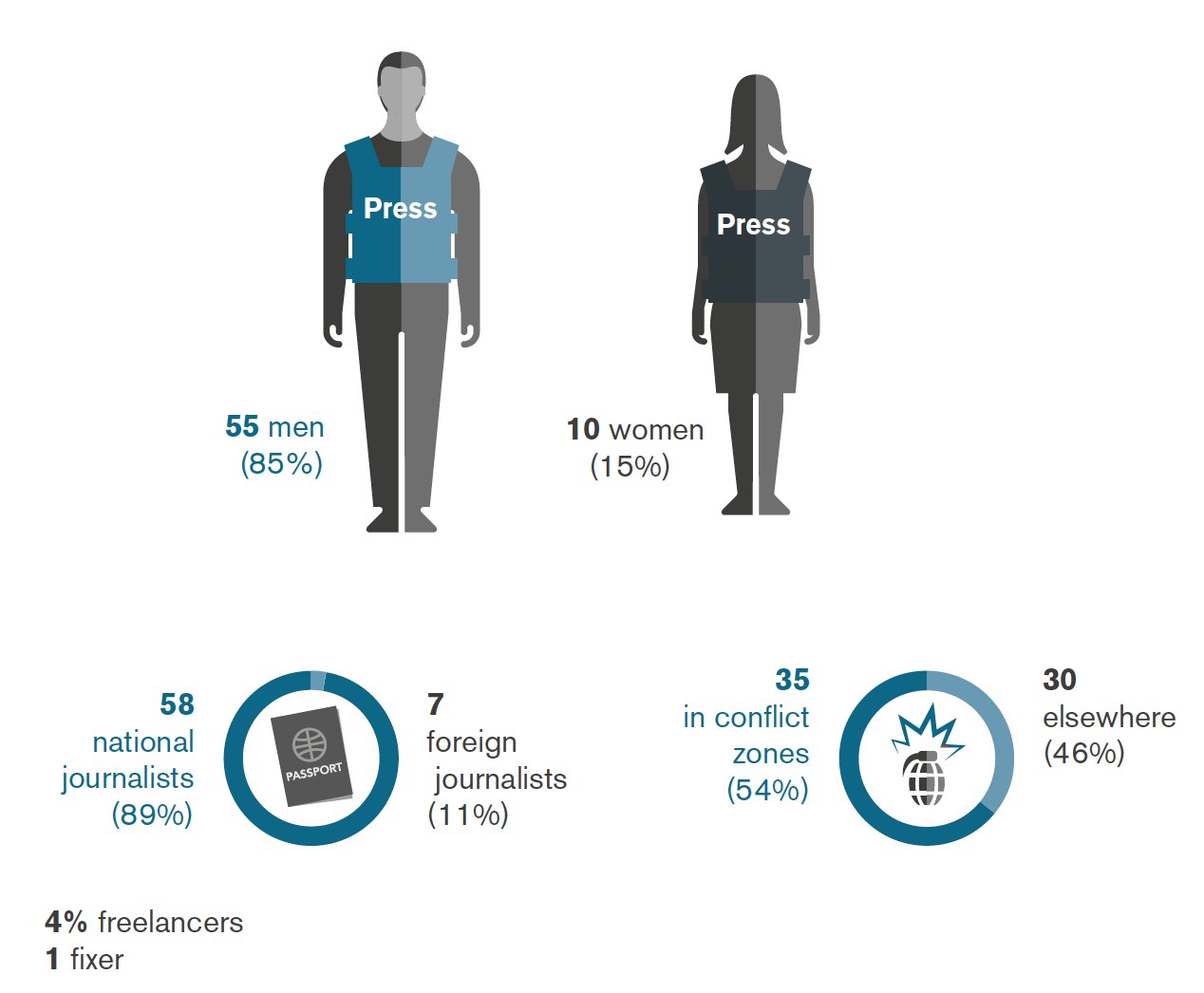 1035 professional journalists killed in the past 15 years

A total of 65 journalists (including professional journalists, citizen-journalists and media workers) were killed worldwide in 2017. Twenty-six of them were killed in the course of their work, the collateral victims of a deadly situation such as an air strike, an artillery bombardment, or a suicide bombing. The other 39 were murdered, and deliberately targeted because their reporting threatened political, economic, or criminal interests. As in 2016, most of the deaths were targeted (60%). The aim in each case was to silence them.

This downward trend may be due in part to the many campaigns waged by international NGOs and media organizations on the need to provide journalists with more protection. More security training has helped to better prepare journalists for visits to hostile terrain. Thought has also been given to the status of freelancers, and initiatives have been undertaken with the goal of giving them the same kind of protection as staffers. These measures include the creation in 2015 of the A Culture of Safety (ACOS) Alliance, a coalition of major news companies, journalism organizations and freelancers, with the aim of developing and adopting worldwide protection standards for freelancers.

Intensive lobbying of governments and international bodies by NGOs such as RSF that defend and protect journalists has also been productive. With the United Nations General Assembly and Security Council, the UN Human Rights Council and the Council of Europe, RSF has promoted recommendations on the safety of journalists that have been reflected in various resolutions. The latest of these was adopted by the UN General Assembly on November 20. Its central focus was on the specific risks faced by women journalists in the exercise of their work and the need to address sexist discrimination, violence, and harassment, including online harassment.

The downward trend is also due to journalists abandoning countries that have become too dangerous. Countries such as Syria, Iraq, Yemen, and Libya have been haemorrhaging journalists. Or journalists have chosen to switch to a less dangerous profession. But inability to report without risking one’s life is not limited to countries at war. Many journalists have either fled abroad or abandoned journalism in Mexico, where the criminal cartels and local politicians have imposed a reign of terror. 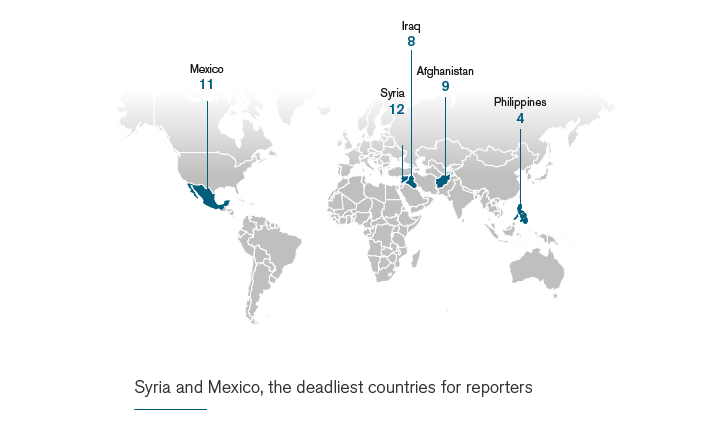 Syria and Mexico, the deadliest countries for reporters 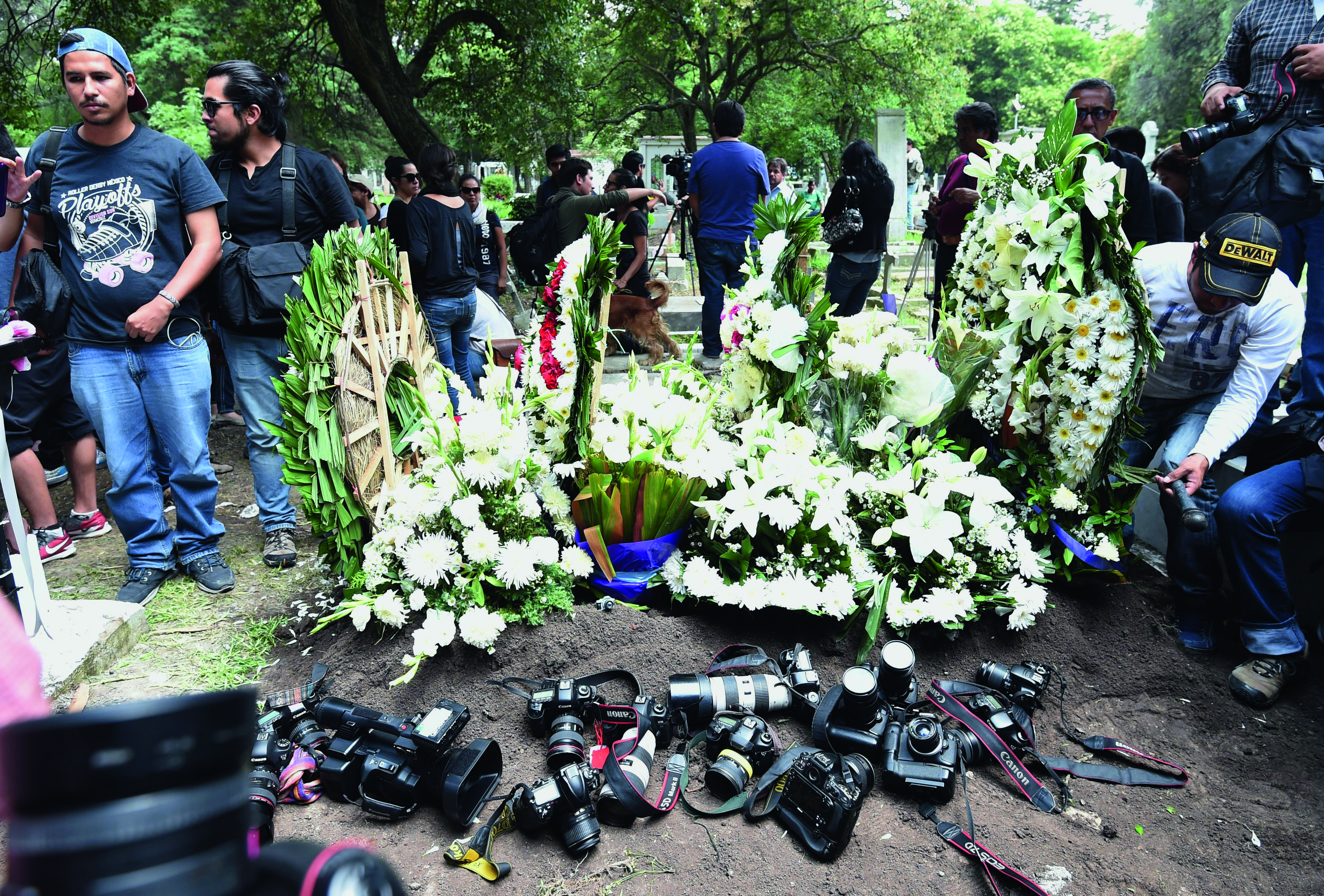 As has been the case for the past six years, Syria continued to be the world’s deadliest country for journalists with 12 killed, but Mexico was close behind with 11 killed. All of them were deliberately targeted. Of countries not at war, Mexico was the deadliest for reporters in 2017, as it was last year.

In the land of drug cartels, journalists who cover political corruption or organized crime are almost systematically targeted, threatened, and often gunned down in cold blood. The murder of Javier Valdez Cárdenas in Culiacán (in Sinaloa state) on May 15 sparked a public outcry. Aged 50, this veteran reporter for AFP and two local papers, La Jornada and Riodoce, specialized in writing about drug trafficking. His latest book, Narco-journalism, recounts the tribulations of Mexican journalists who, despite the dangers, try to cover the activities of the country’s extremely violent narcos (drug traffickers). Ten other Mexican journalists paid with their lives in 2017 for covering sensitive stories. Most of these murders remain unpunished, an impunity attributable to Mexico’s widespread corruption, especially at the local level where officials are often directly linked to the cartels.

Torn by a never-ending bloody war, Syria has been the world’s deadliest country for journalists since 2012. There is danger everywhere on the ground and journalists, professional or not, are permanently exposed to sniper fire, missiles, improvised explosive devices or suicide bombers. Syrian journalists are the most exposed, especially as the presence of foreign reporters has fallen sharply in recent years. Foreign reporters have nonetheless begun to return, especially to the north, to the Rojava region to cover the battles waged by Arab and Kurdish forces against Islamic State in Raqqa and Deir ez-Zor.

In Iraq, eight journalists were killed this year. Here too, it was local journalists who were targeted. The pro-government TV broadcaster Hona Salaheddin lost two journalists, who were killed by Islamic State fighters. The role of the lesser known but challenging profession of fixer was highlighted when Iraqi Kurdish journalist Bakhtiyar Haddad was killed in Mosul in June along with the two foreign reporters for whom he was fixing, French journalist Stephan Villeneuve and Swiss journalist Véronique Robert.

Shortly after being elected president of the Philippines in May 2016, Rodrigo Duterte made this cryptic but alarming comment: “Just because you’re a journalist you are not exempted from assassination, if you’re a son of a bitch.” The threat proved to be more than just talk in 2017, with at least five journalists targeted by gunmen. Four of them succumbed to their injuries. The Philippines thus resumed a grim trend going back more than decade -- one that was interrupted only in 2016, an exceptional year in which no journalist was killed.

Of the 65 journalists killed in 2017, 58 (89%) were killed in their own country and seven were killed while reporting in another country.

Three foreign journalists were killed while covering the war in Iraq in 2017 . They included Stephan Villeneuve and Véronique Robert, two experienced war reporters who were preparing a report for the French TV current affairs program Envoyé Spécial. They were fatally injured by an improvised explosive device while accompanying an Iraqi special forces unit on June 19, 2017.

Tuba Akyılmaz, a Turkish journalist known professionally as Nuzhian Arhan, who reported for the feminist news website Sujin and the Kurdish news agency RojNews, was fatally hit in the head by sniper fire in March in the northern city of Sinjar, where she was covering conflict involving Kurdish forces.

British citizen-journalist Mehmet Aksoy was killed on the other side of the border in October. The editor of The Kurdish Question website, he went to Syria to do a report on fighting involving Syrian Kurdish forces and was killed in an Islamic State attack on a military checkpoint in Raqqa.

Conflicts that were less covered by the media proved just as deadly. American freelance reporter Christopher Allen was killed in South Sudan in August. He was killed by a shot to the head in the far south of the country during clashes between the South Sudanese army and members of the SPLA-IO rebel group with whom he was embedded. Although, when shot, he was wearing a vest that was clearly marked “Press” and despite the fact that he worked for Al-Jazeera, The Independent, Vice News and The Telegraph, the information minister said he felt no responsibility for Allen’s death because he died alongside his rebel comrades.

Honduran journalist Edwin Rivera Paz thought he was escaping danger when he fled to the Mexican state of Veracruz after his colleague, Igor Padilla, was murdered in Honduras. But gunmen shot Rivera dead in broad daylight in Veracruz on July 9, 2017. No information about the investigation into his murder has been provided by either the Mexican or Honduran authorities.

Kim Wall was a respected Swedish freelancer who had worked for leading media outlets such as The New York Times and The Guardian. She had travelled the world in the course of her reporting but it was in Denmark, no more than 50 km from her Swedish birthplace, that she met her death. Planning to do a profile of Danish inventor Peter Madsen, she set off with him on August 10 near Copenhagen in the small submarine he had built. Thereafter, all trace of Wall was lost until her dismembered remains were found at sea and on nearby beaches in the days and weeks that followed. Madsen is now detained and has been charged with her murder.

Ten women journalists were killed this year, as compared to five last year. Many of the victims were experienced and determined investigative reporters with an abrasive writing style. Despite receiving threats, they continued to investigate and expose corruption and other cases involving politicians or criminal groups, and they paid for this with their lives. 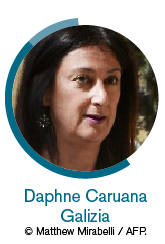 The targeted car bomb that killed journalist Daphne Caruana Galizia in Bidnija, Malta, on October 16 sent a shockwave through her island nation and the rest of Europe. In her blog Running Commentary, which she had been writing since 2008 and which sometimes had as many as 400,000 page views a day, she denounced government corruption, bribery, illegal trafficking, and offshore banking in Malta, the European Union’s smallest country. She had also written many articles about the involvement of close associates of Prime Minister Joseph Muscat in operations exposed by the Panama Papers. Many European leaders have called for an independent international investigation into her murder.

According to RSF’s tally, Caruana Galizia’s murder was the fourth deadly attack on a journalist or journalists in the European Union in the past ten years. It was preceded by the massacre of seven Charlie Hebdo journalists in Paris on January 7, 2015; the murder of Greek journalist Socratis Guiolias, a radio station director and website writer, who was gunned down outside his home in 2010; and the murder of Croatian journalist Ivo Pukanic, a columnist for one of his country’s leading weeklies, Nacional, who was killed by a bomb left beside his car outside the newspaper in 2008. 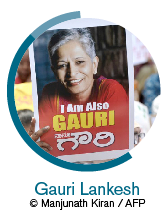 Gauri Lankesh was killed by gunmen who shot her seven times as she was opening the door to her home in Bangalore, in southern India, on the evening of September 5. Aged 55 and the editor of the weekly Lankesh Patrike, she was known for the courage and determination with which she defended women’s rights and criticized the caste system and Hindu nationalism. She had received death threats, especially on the Internet, where supporters of Prime Minister Narendra Modi’s Bharatiya Janata Party had often attacked her. Her last editorial explained how fake news had contributed to the BJP’s election victory in 2014. Progress in the murder investigation is slow. Since her death, several Indian journalists critical of the government have received death threats that referred to her murder. 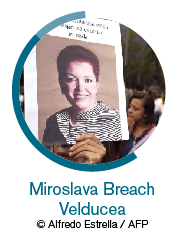 Miroslava Breach Velducea was fatally riddled with bullets while in her car on March 23 in Chihuahua, the capital of the northern state with the same name. Chihuahua is one of the most violent states in Mexico. A reporter for the Norte de Juárez and La Jornada newspapers, she covered organized crime and local government corruption. A few days before her death, she wrote a story about an armed conflict between the two leaders of a criminal group linked to the Juárez Cartel. Eight months after her murder, the investigation has stalled. The Chihuahua authorities announced in April that they had identified her killers, but have said nothing significant about the case since then. Breach’s family and colleagues have struggled to get access to details of the investigation.