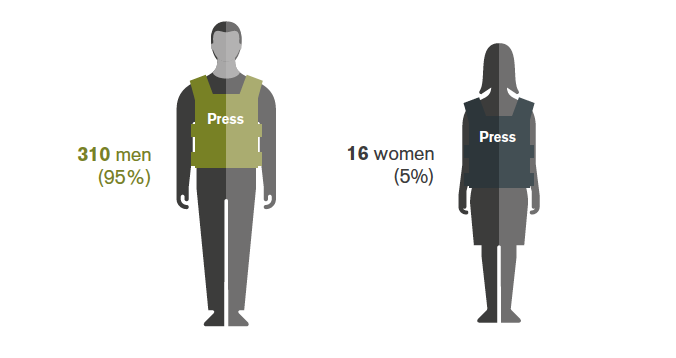 While the overall trend is downward, some countries moved in the opposite direction, detaining an unusual number of journalists in 2017. This was the case in Morocco, where a professional journalist, Hamid El Mahdaoui, four citizen-journalists and three media workers are currently held in connection with their coverage of a wave of protests in the northern Rif region since 2016, a highly sensitive issue for the government. A year ago, not a single journalist was detained in Morocco. In Russia, pressure is growing both in Moscow and the provinces on independent media and investigative journalists who cover subjects such as corruption. Five journalists and one blogger are currently in prison. 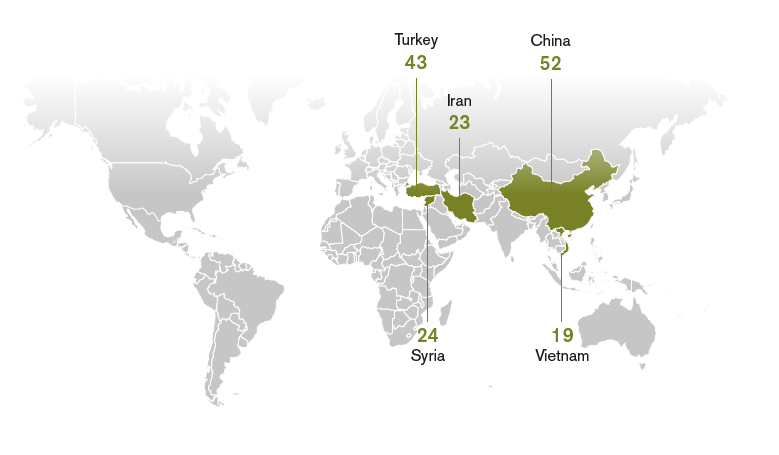 China continues to be the world’s biggest prison for journalists (all categories combined) and continues to improve its arsenal of measures for persecuting journalists and bloggers. The government no longer sentences its opponents to death but instead deliberately lets their health deteriorate in prison until they die.

Nobel Peace laureate Liu Xiaobo, who was also an RSF Press Freedom laureate, and the blogger Yang Tongyan were both diagnosed with terminal-stage cancer this year while serving long jail sentences and died shortly after being transferred to hospital. The international community now fears for the life of Huang Qi, the founder of the 64 Tianwang news website and winner of the RSF Press Freedom Prize in 2004, who is being subjected to beatings and denial of medical care in a Mianyang detention center in an attempt to force him to plead guilty.

TURKEY: PROVISIONAL DETENTION AS A PUNISHMENT

Prey to an unprecedented purge since a coup attempt in July 2016, Turkey continues to be the world’s biggest prison for professional journalists (42 + 1 media worker). Under the state of emergency, the right to due process no longer exists and arbitrary decision-making affects everyone. Criticizing the government, working for a “suspect” media outlet, contacting a sensitive source or even just using an encrypted messaging service all constitute grounds for jailing journalists on “terrorism” charges.

Most of the detainees have yet to be convicted. Provisional detention, which is supposed to be an exceptional measure, is becoming systematic and permanent in Turkey. Some journalists have been awaiting a verdict behind bars for 18 months. This is the case with Şahin Alpay of the newspaper Zaman, Nazlı Ilıcak, a journalist who worked for the newspaper Bugün, and DIHA reporter Nedim Türfent. Such arbitrary methods are now being employed with foreign journalists as well, albeit exceptionally. A young French reporter, Loup Bureau, was held for 51 days in the summer. French photographer Mathias Depardon was held for a month in the spring before being expelled.

The RSF round-up’s detention figures are based on a rigorous methodology that aims to establish on a case-by-case basis that the detained journalist was arrested in connection with their work as a journalist and not for another reason. Of the approximately 100 journalists detained in Turkey, RSF is currently able to state that at least 43 are being held because of their journalism. Many other cases are currently being investigated.

Vietnam entered the ranks of the world’s five biggest prisons for journalists in 2017 with 19 now detained, overtaking Egypt, which currently has 15 journalists in its prisons, compared with 27 this time last year. Using censorship, arbitrary detention, and covert state violence, the Vietnamese regime has conducted an unprecedented crackdown on the freedom to inform in recent months in which at least 25 bloggers have been arrested orexpelled. The fact that 19 bloggers are currently detained explains why RSF is continuing its #StopTheCrackdownVN campaign.

3-Detained to set an example

Journalists are not arrested and prosecuted solely because of what they write. Many of them are left to fester in the prisons of authoritarian regimes in order to serve as an example that is meant to terrorize and silence their colleagues, or serve as leverage in conflicts that do not directly concern them. 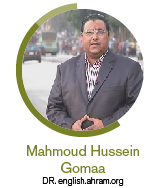 This is the case for Mahmoud Hussein Gomaa, an Egyptian journalist who has been held for nearly a year without any solid charge brought against him. Employed in Doha by the Qatari TV broadcaster Al Jazeera, the Egyptian government’s bête noire, he made the mistake of returning to Egypt for end-of-year festivities in 2016. Clearly the victim of his country’s war with his employer, he is currently charged with inciting hatred and publishing false information.

Die Welt correspondent Deniz Yücel, who has been imprisoned in Turkey since February 2017, is also the victim of a conflict for which he is not responsible. A Turkish-German dual national, the 44-year-old Yücel is accused of “terrorist propaganda” and “inciting hatred,” but has yet to be issued a proper indictment. President Erdoğan has called him a spy and a criminal in speeches and seems to have made him a hostage to Turkey’s increasingly stormy relations with Germany.

Nguyen Ngoc Nhu Quynh, who wrote under the name of “Me Nam” (Mother Mushroom), is one of the many bloggers who have been arrested since the Vietnamese Communist Party’s hardliners gained the upper hand over the reformers in the 2016 congress and began tightening the party’s grip on news and information. For being one of Vietnam’s leading free speech exponents and, in particular, for daring to tackle the issue of police violence in her posts on social networks, Me Nam was given a ten-year jail sentence on a charge of anti-state propaganda at the end of a one-day secret trial in June.

Ahmed Abba, a Radio France Internationale correspondent in Cameroon, is another collateral victim of national issues. Every kind of pretext is used to punish Cameroonian reporters who mention crises such as the Boko Haram insurrection in the north of the county or anti-government protests in the English-speaking regions. The prolonged detention of Abba, a respected journalist, reflects the government’s determination to control the public discourse and avoid any questioning of its authority. Despite repeated calls for Abba’s release from RSF, journalists’ associations, and international organizations, he was sentenced in April 2017 to ten years in prison on a charge of “laundering the proceeds of a terrorist act.” A court is due to rule on his appeal on December 21.