Exclusive: The campaign for Brazil’s two-round presidential election on 2 and 30 October has just begun. Each week, Reporters Without Borders (RSF) will monitor more than 100 Twitter and Facebook accounts of journalists, government officials and candidates with the aim of understanding how online hatred against the media originates and spreads. The TV debates during the second week of the campaign, triggered major attacks against the national media and the journalist Vera Magalhães in particular.

During the second week of the election campaign, from 22 to 28 August, RSF and the Laboratory for Image and Cyberculture Studies (LABIC) registered nearly 2.8 million attacks against the Brazilian media on Twitter, and tallied 140 insulting hashtags targeting journalists or media outlets that were mentioned in 937,870 tweets.

Interactions (mentions, retweets and shares) with the profiles of the 120 journalists being monitored doubled, from 600,000 tweets during the first week of the campaign to 1.5 million during the second. Countless online attacks accompanied this explosion. The anchors of “Jornal Nacional” (Brazil’s most popular evening news programme, on TV Globo), Renata Vasconcellos and William Bonner, were especially targeted after interviewing six of the 12 presidential candidates between 22 and 26 August. The most widespread insulting hashtags were #BonnerDitador (#DictatorBonner), #BonnerLixo (#TrashyBonner) and #RenataMentirosa (#LyingRenata). The hashtag #GloboLixo (#TrashyGlobo), targeting Brazil’s most influential TV news channel, TV Globo, was shared nearly 380,000 times in this week alone.

Target of the week

The most striking episode of the week, however, was the wave of attacks against the journalist Vera Magalhães during the presidential debate on TV Bandeirantes on 28 August. Asked by Magalhães about his handling of the pandemic and disinformation, President Jair Bolsonaro replied: “I think you think of me in your sleep. You cannot take sides in a debate like this by making false accusations about me. You are a disgrace to Brazilian journalism.”

This comment by the president, who is seeking a second term in this election, triggered an immediate avalanche of tweets attacking Magalhães, TV Cultura’s star anchor. The hashtag #VeraVergonhadoJornalismo (#VeraJournalism’sDisgrace) was shared more than 10,000 times in the space of a few hours, as was the expression “Verba Magalhães,” a reference to false information about her salary. 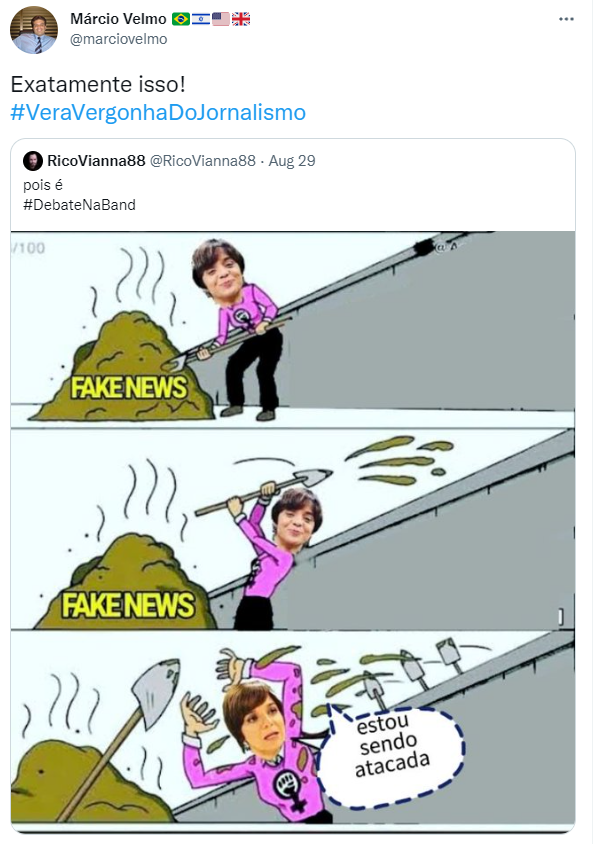 The five most virulent Twitter accounts identified by RSF and Labic – @marinaaddarosa @francorosito1, @cesarmo70820605, @mia41278514 and @romerossouza – have all declared their support for President Bolsonaro in their profile photos, retweets and biographies.