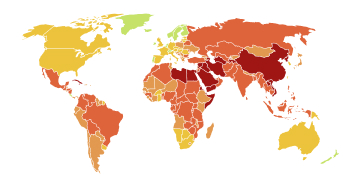 Go to the Index
Acting now and together
Image

All the petitions
Image

By sharing, you take action.

All posts
Legal framework and justice systemViolence against journalistsInvestigation
Cameroonian journalist Martinez Zogo’s murder was a state crime, official confesses
RSF has learned that many Cameroonian intelligence officers have been arrested in connection with Zogo’s murder, and that a suspect who has confessed to participating in the murder has even said that it was Cameroon's justice minister who ordered it.
Legal framework and justice systemDigital space and democracyNews
Mongolia: RSF commends presidential veto of a dangerous social media bill
RSF commends the Mongolian President’s veto of a social media bill that poses a potential threat to journalism and the public’s right to information, and urges the parliament not to override this veto.
Violence against journalistsNews
RSF steps up monitoring of media freedom violations in Brazilian Amazon
The data gathered by the Observatory will be published in the form of maps, reports and other kinds of content
Show more posts