Reporters Without Borders (RSF) condemns a Thai government ban, imposed yesterday, on any online contact or interaction with three prominent critics of the regime – a foreign journalist and two academics – and urges all Facebook users beyond the government’s reach to share content from the Facebook accounts of these three critics. The ban’s three targets are Andrew MacGregor Marshall, a well-known Scottish journalist who used to be based in Bangkok, and Thai academics Somsak Jeamteerasakul and Pavin Chachavalpongpun. All three fled Thailand, where they are accused of lèse-majesté.

Issued in the form of a letter from the Ministry of Digital Economy and Society that was posted on a Thai newspaper’s website yesterday, the ban forbids Thai citizens from sharing online content with or about the three critics or even just following them online. Anyone defying the ban could face imprisonment under the Computer-Related Crime Act (CCA).

Marshall, who left Thailand in 2011, is the author of “A Kingdom in Crisis - Thailand’s Struggle for Democracy in the Twenty-First Century,” a book published in 2014 that was quickly banned by the Thai police because, according to then police chief Gen. Somyot Poompanmoung, it threatened “the kingdom's stability, order or the good morality of the people.” A political commentator who often posts on Facebook, Somsak was a history lecturer at the University of Thamamsat history until he fled the country in 2014 after receiving death threats and a summons from the authorities. Pavin is a political scientist who fled to Japan the same year after refusing to respond to a summons from the military authorities.

Jaran Ditapichai, a pro-democracy activist and former Thai Human Rights Commissioner who fled to France after being accused of lèse-majesté, told RSF: “This order not only violates human rights, especially free speech and the right to communication, but also affects all Thai citizens. I urge all international and national human rights organizations to investigate the Thai military government’s abuse of power.”

“After forcing these three critics to flee the country, the Thai junta is now trying to limit the impact of what they write by banning any online communication with them,” said Benjamin Ismaïl, the head of RSF’s Asia-Pacific desk. “This iniquitous and Orwellian ban highlights not only the government’s contempt for freedom of information but also the draconian Computer-Related Crime Act’s incompatibility with international standards. The CCA permits every kind of abuse in term of surveillance and censorship, especially since it was amended by the National Legislative Assembly last December.”

RSF therefore appeals to all Internet users who are beyond the Thai junta’s reach to share content from the Facebook accounts of Somsak, Pavin and Marshall in response to yesterday’s order declaring this content to be illegal. 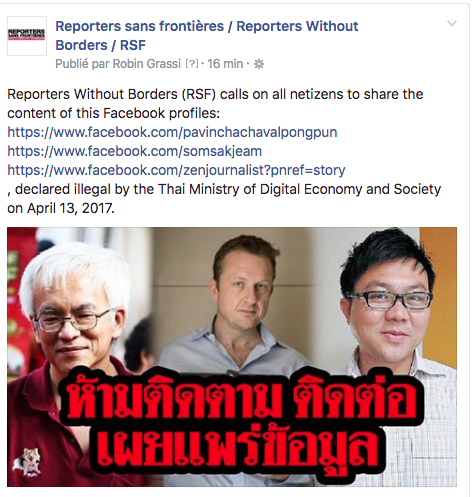 Thailand’s lèse-majesté law (article 112 of the criminal code) is the most draconian of its kind in the world. The authorities constantly use this article, the CCA and other legislation to violate freedom of the media and information. Last month, RSF issued a press release condemning an ongoing prosecution of British journalist Jonathan Head, a BBC correspondent, under the CCA.

In a November 2015 report on the situation in Thailand, entitled “Media hounded by junta since 2014 coup,” RSF urged the Thai authorities to stop using draconian legislation to gag critical and independent media, censor the Internet and spy on bloggers and anyone posting “critical” information on social networks.

Ranked 136th out of 180 countries in RSF’s 2016 World Press Freedom Index, Thailand has seen drastic curbs placed on media freedom since the military staged a coup in May 2014.