Fake versions of the front pages of five Senegalese newspapers – replacing the news headlines with political propaganda – have been circulating on social media since 7 July. Reporters Without Borders (RSF) condemns these disinformation attempts, especially in a country that is holding parliamentary elections on 31 July.

The five newspapers whose front pages have been hijacked in this way from 7 to 27 July are EnQuête, L’Observateur, Le Soleil, Sud Quotidien and Le Quotidien.

“Coming at the end of the election campaign, the hijacking of newspaper headlines on social media is a disinformation method targeting the general public,” said Sadibou Marong, the director of RSF’s West Africa bureau. “It is liable to impact the democratic debate and harm the media that are victims, by damaging their reputation and even putting their journalists in danger. We ask the authorities to do what is necessary to put a stop to these practices, which threaten media coverage and badly undermine the credibility of the newspapers that are victims.”

This dangerous technique can easily deceive social media users. Many identifiable Twitter accounts transmitted the false front pages. Le Quotidien posted a tweet on its official account comparing the real and fake front pages of its 23 July issue. A group called Senegal’s Patriotic Observer (OPS) that was created on 7 July used a logo similar to the L’Observateur newspaper’s logo with photos of several faked front pages. It had more than 24,000 followers on 27 July. 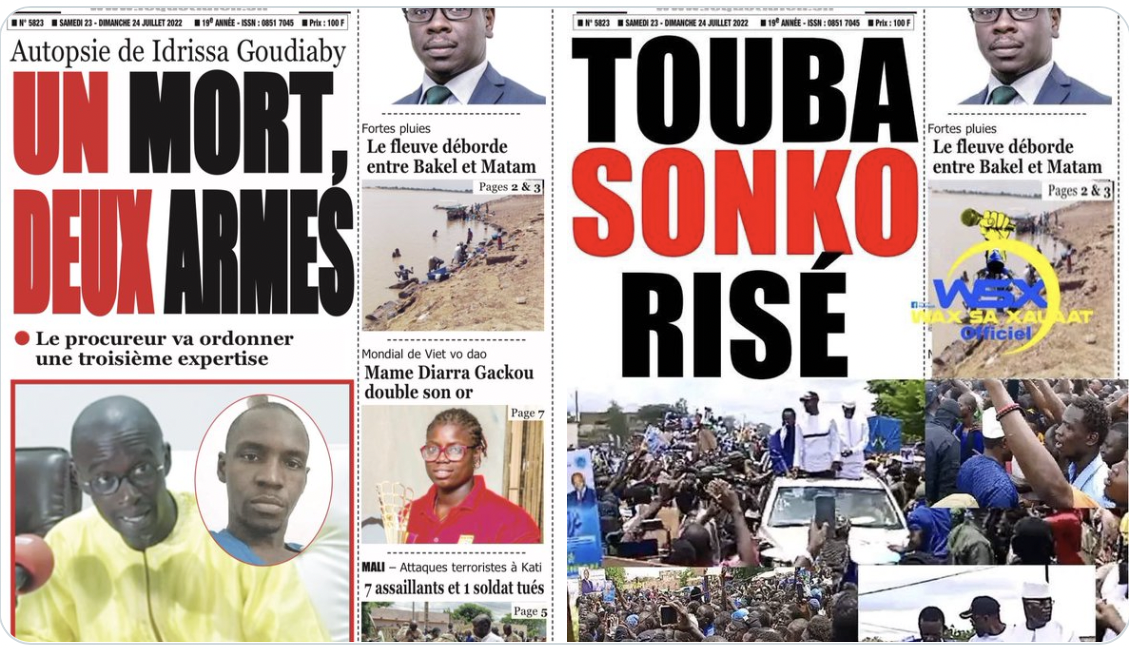 One the left, Le Quotidien’s real front page on 23 July. On the right, the fake version.

RSF urges all of the affected media to report these incidents and to file complaints with the authorities. RSF also notified Twitter and Facebook-owner Meta, which deleted the page in question.

“We do not allow fake accounts on our platforms and we remove profiles that impersonate other people”, said Balkissa Idé Siddo, Meta’s public policy director for Africa. “In this specific case we removed the page in question for violating our page policies on authenticity.’’

A daily founded in 2003, L’Observateur is part of Futurs Médias – a group owned by international singer Youssou N'dour – which condemned the fake front pages and announced that it has filed a complaint with the public prosecutor.

On 15 July, EnQuête’s staff discovered that the front page of their newspaper that was visible on social media was not the same the one they had printed. The fake front page referred in crude terms to the domestic life of one of the government’s opponents, thereby potentially undermining the credibility of this reputable daily, which has been publishing for more than ten years.

EnQuête editor Bigué Bob told RSF that many readers contacted him after the fake version’s appearance on social media. “They called me to ask since when was our newspaper producing such crude front pages. I had to tell them that they weren’t ours.” EnQuête filed a complaint the next day and told its readers that its front page had been “hijacked by ill-intentioned people with the aim of attacking  their political opponents.”

Sud Quotidien, a newspaper that has been publishing since 1993, also issued a statement saying that it had noted that its logos and trademarks had been hijacked on social media and certain websites.

The fake front page of the national daily Le Soleil circulating on social media on 25 July claimed that the main opposition coalition had dominated the election campaign whereas the real front page lauded President Macky Sall’s success following the signing of an accord between Russia and Ukraine on grain exports.

RSF calls on the authorities to launch immediate investigations with the aim of identifying and punishing those responsibe for the fake front pages.

Senegal is ranked 73rd out of 180 countries in RSF's 2022 World Press Freedom Index.