RSF issues SOS about violence against journalists in Venezuela

Reporters Without Borders (RSF) is launching a campaign with a disturbing visual on social networks to draw the international public’s attention to the persecution of journalists and censorship of the media that is intensifying dramatically throughout Venezuela.

Venezuela’s political and economic crisis, marked by mounting social unrest and protests against President Nicolas Maduro’s government, has resulted in growing authoritarianism and hostility towards the media and journalists in 2017.

RSF has issued a series of press releases this year, including one on 27 June, celebrated as Day of the Journalist in Venezuela, voicing concern about the government crackdown and the increase in violence against news and information providers.

In the latest example, four journalists were arrested (and placed in pre-trial detention) and many others were attacked or threatened during the constituent assembly election on 30 July.

It was CONATEL that pressured many TV and radio stations not to cover the opposition’s anti-Maduro referendum on 16 July – a censorship attempt that was condemned by several journalists’ organizations including the National Union of Press Workers (SNTP) and the National Association of Journalists (CNP).

On the day of the vote, armed men attacked Luis Olavarrieta, a journalist with the Caraota Digital news website.

Amid the growing tension in Venezuela, the #SOSPress message that RSF has launched on social networks is an appeal for assistance and for campaigning support. It uses a disturbing image to symbolize the violence that Venezuelan journalists are now facing on a daily basis.

“The camera exploding under the impact of a bullet, the overshadowed press armband and the masked mouth of a journalist are symbols of the dangerous escalation of violence and are meant to draw the public’s attention to the threats to free speech and media freedom in Venezuela,” said Emmanuel Colombié, the head of RSF’s Latin America bureau. 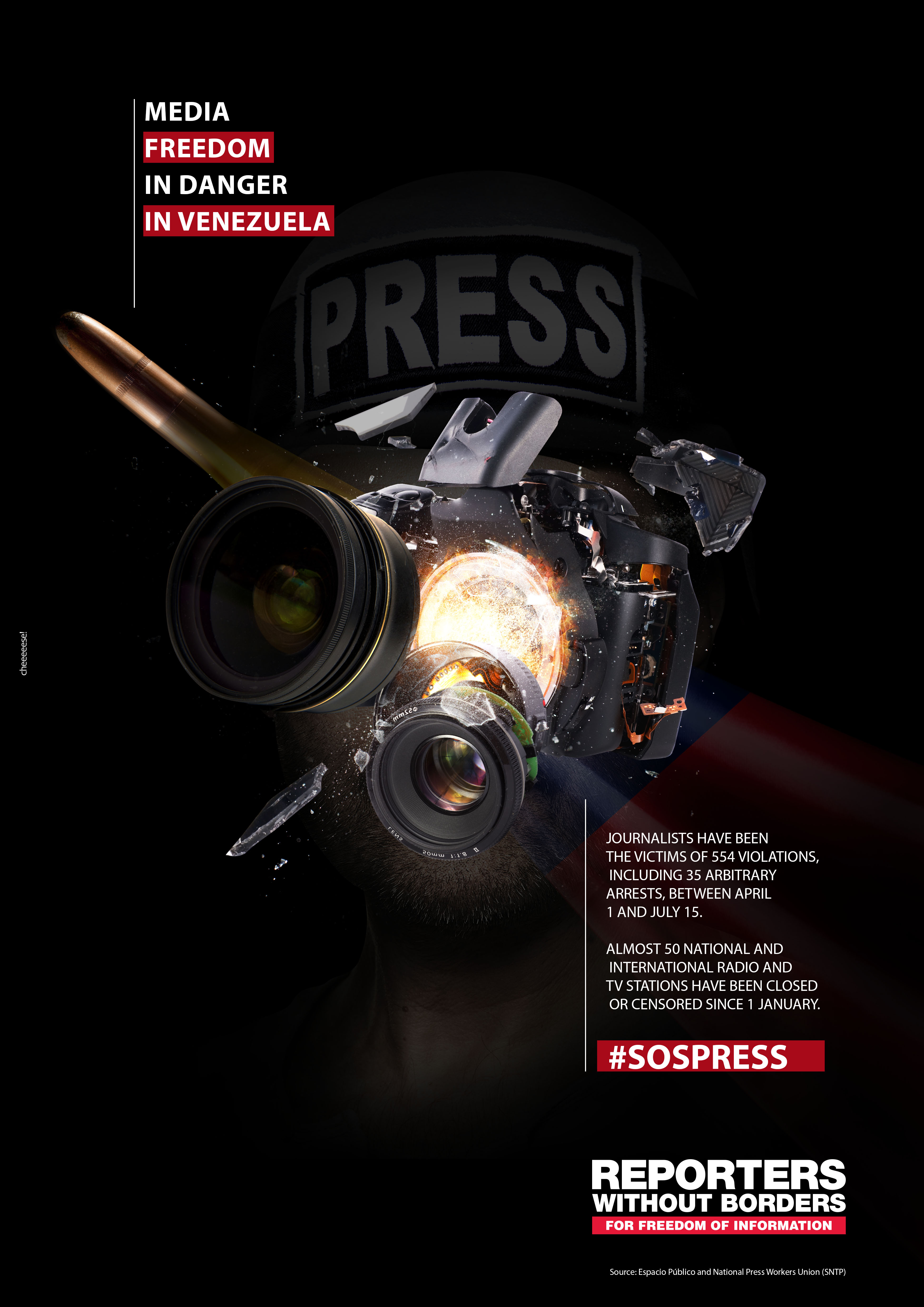 RSF would also like to draw attention to the case of Carlos Julio Rojas, a journalist with the radio and TV programme Radar de los Barrios, who was arrested without a warrant during a demonstration on 6 July and is being held in Ramo Verde military prison.

Charged with treason, rebellion and stealing military property on the grounds that grenades were allegedly found in his bag shortly after his arrest, he could become the first journalist to be tried by a military court in Venezuela. His lawyer insists that the grenades were placed in his bag without his knowledge. RSF is firmly opposed to this trial, pointing out that, as a result of a 1981 decision by the country’s supreme court, no civilian may be tried by a military court in Venezuela.

*Updated figures as at July 27