Most of these press freedom predators have been preying on the media for years, some for decades. To draw attention to the impunity they enjoy, RSF has filled out a hunting permit for each of these predators. It identifies their favourite attack techniques, their enforcers, their favourite targets, their official discourse ­– blatant threats by some, complete denial by others – and their kill tally, which in some cases is only too real.

Their predatory techniques vary. Some use enforcers to torture and murder. Some use mass arrests and arbitrary imprisonment. Others employ more sophisticated methods such as terrorism laws, lèse-majesté charges or financial asphyxiation. The list is not exhaustive, naming only those who have distinguished themselves the most in the past year.

“These predators are the ones who most trample on media freedom and commit the worst atrocities against journalists without being held to account,” RSF secretary-general Christophe Deloire said. “The way to break the vicious cycle of impunity is to appoint a United Nations special representative for protecting journalists.”

As in the past, most of the predators are presidents or prime ministers of such countries as Singapore, Thailand, Cuba, Eritrea, Burundi, Democratic Republic of Congo and South Sudan

The list’s new entrants include Turkish President Recep Tayyip Erdogan, who now controls most of his country’s media groups. The state of emergency introduced in July after a failed coup d’état gave him the opportunity to arrest more than 200 journalists and shut down more than 100 newspapers, magazines, TV channels and radio stations.

Fans of mass round-ups and arbitrary detention include Egypt’s Abdel Fattah Al-Sisi, who was elected president in 2014 after leading the military coup against the Muslim Brotherhood government in July 2013. His regime hounds journalists with any kind of link to the Muslim Brotherhood. Similarly, Prayut Chan-O-Cha, Thailand’s junta chief and prime minister, has been gagging not only journalists, media outlets and bloggers, but also performers, intellectuals, academics and his political opponents ever since he introduced martial law in May 2014.
Predators gallerySee


In Burundi, President Pierre Nkurunziza began cracking down on the media in 2015, starting with those that covered a coup attempt by opponents of his plan to run for an unconstitutional third term. This persecution has taken many forms, including judicial harassment, arbitrary imprisonment, broadcasting and publication bans, beatings, torture and disappearances.

Since succeeding his brother Abdullah as Saudi Arabia’s king, Salman bin Abdelaziz Al Saud has embodied the heritage of a dynasty that has always been hostile to media freedom. Venezuela’s President Nicolás Maduro has his own methods for silencing media outlets. He got friends to buy El Universal and Globovisión, triggering a wave of dismissals and resignations. He orchestrates newsprint shortages to silence newspapers and he uses a law that criminalizes any content that may “call into question legitimately constituted authority.”

With regard to religious extremism, the Islamic State stops at nothing to impose terror, kidnapping and murdering journalists who do not swear allegiance, while Bangladesh’s Ansarullah Bangla Team posts lists of alleged blasphemers (secularist bloggers and freethinkers) on Facebook and calls for them to be murdered.

In Afghanistan and Pakistan, the Taliban continue their barbaric and deadly practices, turning the areas they control into information black holes where journalism is impossible. In Yemen, there have been countless abductions and disappearances of journalists and accounts of detainees being tortured under the Houthis, a Shia political movement that took control of the capital and most of the country in 2014, storming the studios of Al-Jazeera, Al-Yamane-Shabab and Yemen-Digital Media. 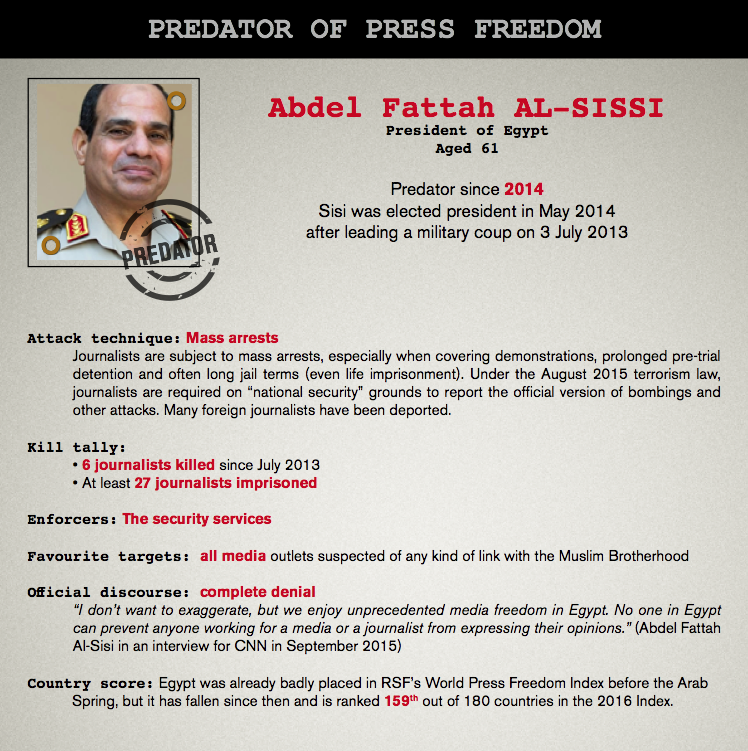 The Mexican crime cartel known as Los Zetas has seen several of its leaders arrested but it continues a campaign of terror based on the use of murder, abduction and the most barbaric forms of violence.