Freedom of information is fundamental in any democracy, but nearly half of the world’s population does not have access to freely-reported news and information.

Reporters Without Borders (RSF) provides information about the media freedom situation worldwide in French, English, Spanish, Arabic, Chinese, Russian and other languages. After checking and corroborating our information, we issues press releases every day about abuses against journalists and about the many different kinds of censorship.

The World Press Freedom Index that we compile every year evaluates the level of freedom available to the media in 180 countries. We also publish regular thematic reports such as the “Enemies of the Internet” report in 2013, which turned the spotlight on the governments of countries such as China, Burma and North Korea that try to control the Internet.

We mobilize public and government support by means of eye-catching protests and awareness campaigns that sometimes shock. We try to draw the public’s attention to violations against journalists and to deter leaders from persecuting independent media outlets.

When journalists are taken hostage anywhere in the world, RSF sets up support committees and helps organize activities designed to press for their release. 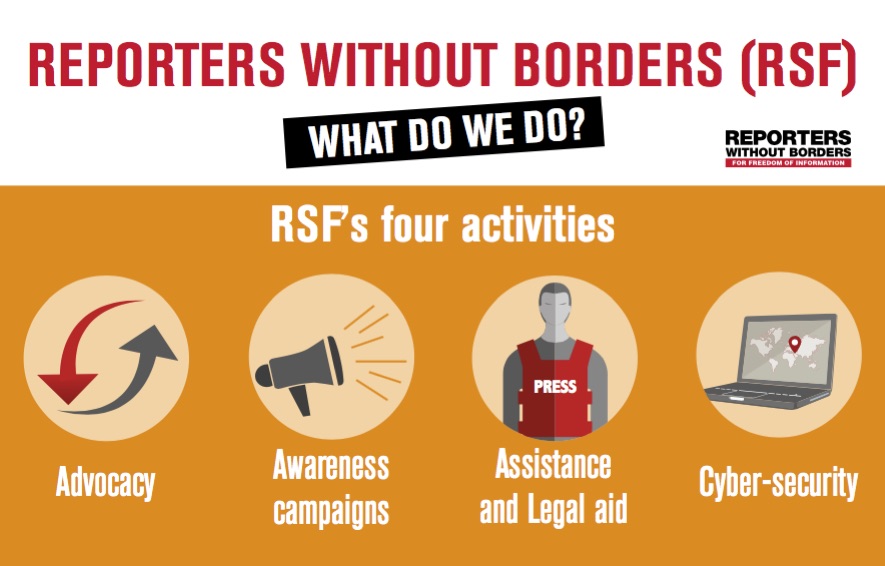 We protect journalists and bloggers in danger. We lend bulletproof vests and helmets, we give training in physical and digital security, and we provide insurance, an emergency hotline and information manuals to journalists, especially freelancers and stringers, traveling to war zones or covering elections in dangerous regions.

RSF often registers as an interested civil party in judicial cases in order to support journalists in difficulty, and provides legal assistance to journalists seeking asylum. It also provides hundreds of assistance grants every year to threatened independent media.

We put pressure on

We put pressure on governments and organizations. We help countries that want to draft legislation that respects basic freedoms. We provide governments in Africa, the Middle East, and Asia with recommendations that accord with international standards.

These days, the fight for information is waged mainly online, a battleground that RSF entered in 2001 when it created its New Media Desk. In response to all the changes and turmoil wrought by the Internet, RSF has developed new skills and new tools to combat online censorship.

On March 12th, 2015, World Day Against Cyber-Censorship, RSF launched Operation Collateral Freedom to unblock access to nine news websites that were blocked in 11 countries that are Enemies of the Internet.

Nowadays we are swamped by information. The quantity has kept on growing but the quality is now a big issue for everyone. The way the media operate is changing but the quality of their reporting continues to be a challenge. RSF has embarked on a new program designed to draw the public’s attention to journalism that serves corporate or political interests, and to encourage a debate about media independence.

Published annually, the Index measure the level of freedom available to the media throughout the world. It elicits reactions from many governments including those at the top of the Index such as Finland and Norway and those at the bottom such as North Korea and Eritrea. This tool enables RSF to provide information about advances and declines in respect for media freedom in 180 countries.The 2016 Index
See the Index Since 2012, the questionnaire has been expanded and the number of respondents has tripled. The Index is one of the tools that the World Bank uses to evaluate a country’s respect for the rule of law.

The round-up provides annual figures for acts of violence and abuses against journalists at the country and regional level. It is an important tool for journalists, international bodies and political decision-makers.