Reporters Without Borders (RSF) staged a demonstration outside Azerbaijan’s embassy in Paris today to celebrate Azerbaijani journalist Khadija Ismayilova’s 40th birthday and to tell her government that her release two days ago is just the first step towards ending media freedom violations in Azerbaijan.

Ismayilova was freed after a court suspended her jail sentence but she continues to be subject to judicial control and cannot leave the country. At least eight other journalists and bloggers are still detained in connection with their reporting while independent media outlets are forced to operate in exile and are still hounded.

“In releasing Khadija Ismayilova after 537 days of arbitrary detention, the Azerbaijani government has given a bit of ground but is still far from behaving as it should towards media freedom,” said Johann Bihr, the head of RSF’s Eastern Europe and Central Asia desk. “The international community must keep up the pressure until Baku stops harassing independent media, restores pluralism and frees all imprisoned journalists.”

RSF also took part in a similar demonstration yesterday in Washington and today in Berlin. 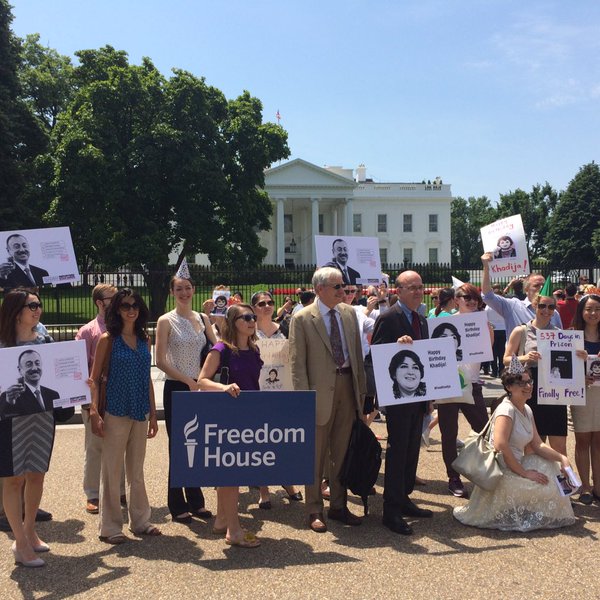 And many other activities are being organized throughout the world today as part of the Sport for Rights coalition, which groups the leading human rights organizations involved with Azerbaijan.

On the day Ismayilova was freed, 25 May, the photographer Elnur Mukhtarov was arrested and was sentenced to ten days of administrative detention. He had covered an anti-government protest and had posted his photos on Facebook. He joins the other journalists and bloggers held in connection with their reporting. They include:

There is no limit to the harassment of journalists in Azerbaijan who work for “Azerbaycan Saati,” a TV programme produced abroad, and Meydan TV, a TV station based abroad. As they cannot touch their editors, Ganimat Zahid and Emin Milli, the authorities persecute members of their families inside Azerbaijan. Several have been jailed on trumped-up charges while others have been forced to publicly disown Zahid and Milli.

Azerbaijan is ranked 163rd out of 180 countries in RSF’s 2016 World Press Freedom Index.

All posts
Legal framework and justice systemViolence against journalistsAdvocacy
RSF and partners urge the authorities to investigate the harassment campaign against Emilia Șercan
Four months after the journalist Emilia Șercan filed complaints for the publication of her private pictures and the alleged leak of key elements of the case, RSF and partners are calling on the prosecution to commit to pursue the investigations.
Legal framework and justice systemDigital space and democracyNews
Media bill poses major threat to press freedom in northern Cyprus
The administration has approved a bill that threatens journalists with arbitrary prosecution. RSF urges the local parliament to reject it and instead prefer European methods for promoting reliable information over Turkey's repressive ones.
Disinformation and propagandaInternational laws and governanceDigital space and democracyModels and good practicesNews
RSF’s proposals for ambitious, innovative European Media Freedom Act
RSF calls on the European Commission, which is drafting a European Media Freedom Act, to be ambitious in its efforts to safeguard and ensure respect for this fundamental freedom at a time when it faces increased threats and unprecedented challenges.
Show more posts