G20 leaders in China: “the right to remain silent” does not apply to you!

Reporters Without Borders (RSF) urges all leaders attending the G20 summit on 4-5 September in the southeastern city of Hangzhou to finally end their silence about the decline in justice in China, where forced confessions are increasingly used to justify jailing information activists and all those critical of President Xi Jinping and the Chinese Communist Party. 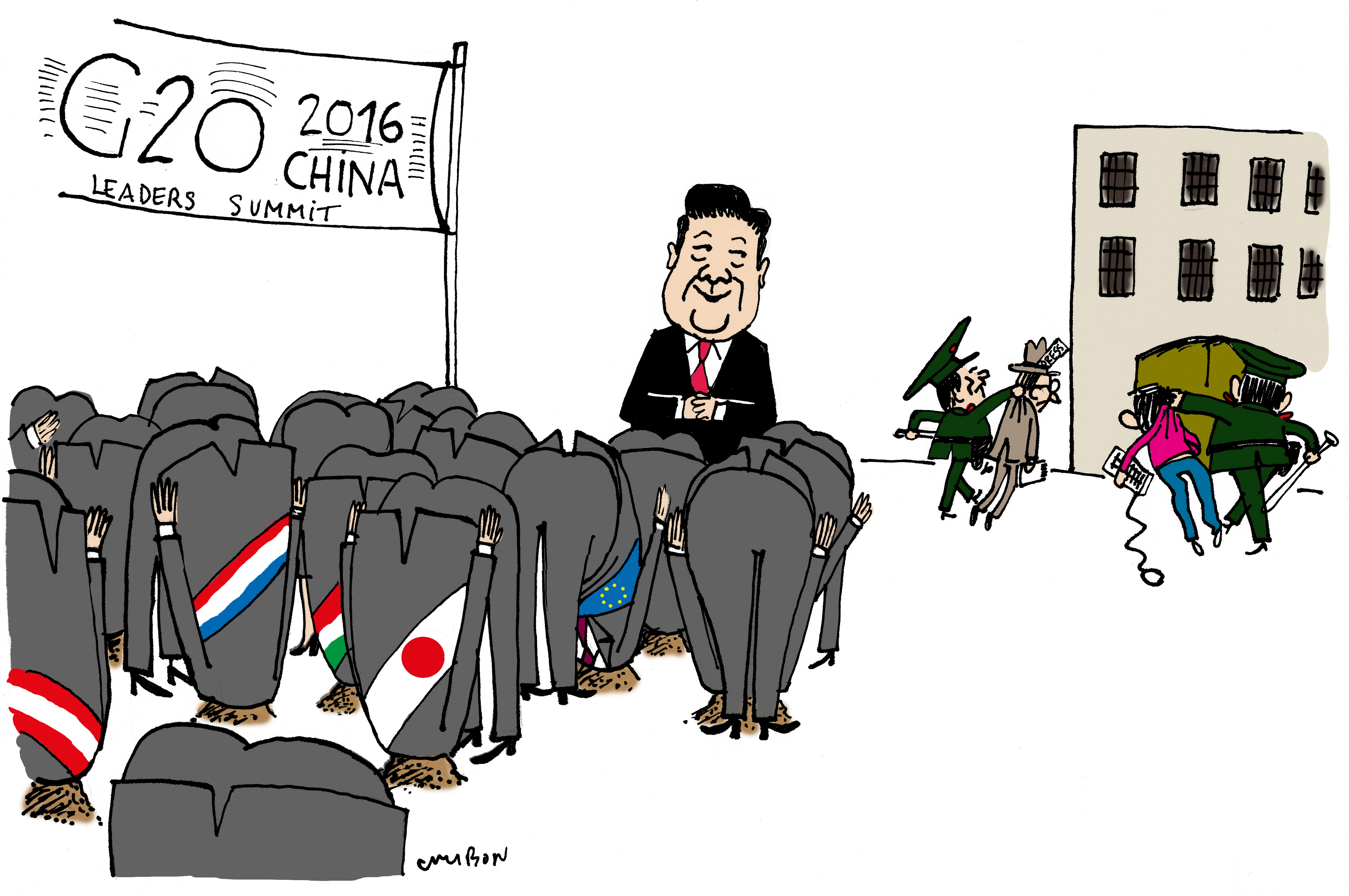 China’s Supreme People’s Court issued a directive to law enforcement officers on 21 November 2013 to stop using torture to get detainees to confess. “Interrogation by torture in extracting a confession, as well as the use of freezing, hunger, drying, scorching, fatigue and other illegal methods to obtain a confession from the accused, must be eliminated,” the court said.

Nonetheless, although enshrined in Chinese law, “the right to remain silent” has never been violated as much as in the past three years.

Two weeks after her abduction by the police, the journalist Gao Yu resurfaced on 8 May 2014 on state-owned China Central Television (CCTV), where she was shown “confessing her crimes” to a police officer. This shameful video proved that China continues to use mistreatment to justify imprisoning independent journalists and all those deemed overly critical of the Party.

The broadcasting of this footage by a government-controlled TV news channel constituted a direct and grave violation of the right to due process. When tried in November 2014, Gao revealed that she had given the confession under the threat of reprisals against her son.

Many lawyers, human rights activists and Hong Kong-based publishers, some of them foreign citizens, have been arrested by the Chinese authorities and forced to confess in the course of several unprecedented crackdowns in 2015 and 2016.

All were subjected to pressure. Sometimes the pressure was physical or sometimes they were threatened with possible reprisals against loved-ones. In most cases, the broadcasting of their confessions, often accompanied by a Xinhua government news agency dispatch, was part of a smear campaign against independent information providers.

“Why are detainees punished severely in China if they say nothing?” said Benjamin Ismaïl, the head of RSF’s Asia-Pacific desk.

“Because the authorities know that censoring criticism and independent news reporting is not enough to establish control over news and information. Forced confessions are an important part of Beijing’s propaganda strategy, which seeks to impose its twisted vision of reality on the Chinese people and the rest of the world.

“By their silence about the culpability of the Chinese state media, the G20 leaders are using unacceptable double standards. By remaining silent about Beijing’s propaganda, they are sabotaging the work of all the human rights and media freedom activists and are contributing to the systematic disinformation of the Chinese people.”

RSF has been calling on the European Union to adopt sanctions against CCTV and its executives for more than two years. This would be consistent with European Council resolution 2013/124/PESC of March 2013, which found that certain Iranian officials – including Press TV’s CEO and news director – had violated the right to a fair trial by their use of forced confessions and were complicit in the use of violence to make detainees “confess.”

The forced confessions that the Chinese public have seen on their TV screens were obtained in manner similar to those condemned by the European Council.

Ismaïl added: “RSF reiterates its call for sanctions against the government officials and state media executives responsible for this system of propaganda, which not only aims to discredit all human rights activists, dissidents and government critics one by one, but also contributes to the almost systematic use of psychological and physical violence and constitutes a flagrant denial of justice for its victims and their families.”

The world’s biggest prison for journalists and bloggers, with more than 200 currently detained, China is ranked 176th out of 180 countries in RSF’s 2016 World Press Freedom Index.

All posts
Arbitrary detention and proceedingsNews
China: five years after Liu Xiaobo’s death, at least 15 press freedom defenders at risk of dying in prison
Five years after the passing of Chinese Nobel Peace Prize and RSF Award laureate Liu Xiaobo, RSF publishes a list of 15 press freedom defenders who are in danger of losing their lives
Arbitrary detention and proceedingsInternational laws and governanceNews
China: Five years after the death of press freedom defender Liu Xiaobo, RSF calls on democracies to step up pressure on the regime
On the fifth anniversary of the passing of Nobel Peace Prize and press freedom defender Liu Xiaobo, who died of au untreated cancer while in detention, RSF calls on the international community to finally step up pressure on the regime
Independence and pluralismModels and good practicesNews
Chinese foreign minister tolerates no reporters during Pacific island tour
Reporters Without Borders (RSF) condemns the total media blackout imposed on events during Chinese foreign minister Wang Yi’s ten-day tour of Pacific island countries.
Show more posts