An online controversy erupted after The Guardian published a story on 1 March by Rossalyn Warren about “fake news” in Burundi. Its aim was to describe the activities of exile journalists and the government’s control of the news. But, because of reporting errors, it ended up being used for the government’s manipulation of information against its opponents.

Warren interviewed three Burundian journalists who have fled to Rwanda, erroneously reporting that they worked for the SOS Media Burundi network, which has no journalists in Rwanda.

In fact, the journalists she interviewed work for the exile web radio Humura, an offshoot of Radio Publique Africaine (RPA), a popular radio station that was shut down for good by President Pierre Nkurunziza’s government in April 2015.

Created in the wake of an abortive coup against the Nkurunziza regime in May 2015, SOS Media Burundi consists of a network of journalists who are still in the country. As Warren’s article said, it operates clandestinely to avoid exposing its reporters to danger.

Warren subsequently acknowledged that she had confused SOS Media Burundi with Humura and her article was amended on 4 March so as to state that her three interviewees worked for Humura. But it was still inaccurate, because it continued to describe Humura as a secret network operating inside Burundi (a description applicable to SOS Media Burundi) rather than as an exile radio.

SOS Media Burundi issued a statement the next day taking issue with the Guardian article and denying that any of its journalists were based in Rwanda. The matter would have ended there if the Burundian government had not decided to exploit it in support of its control and manipulation of news and information, which have assumed an important role since 2015.

The Guardian’s story circulated widely on social networks and endangered SOS Media Burundi’s journalists, who now find themselves being assailed from all quarters. Journalists in Burundi felt threatened because it linked them with Rwanda – a dangerous association given the current tension between the two countries.

But the Guardian’s erroneous article and SOS Media Burundi’s denial have above all served as grist for the mill of the government’s propagandists. The president’s media adviser, Willy Nyamitwe, has turned Warren’s mistake into “lies” that support the government’s claims about international media bias and an “international conspiracy” against Burundi. 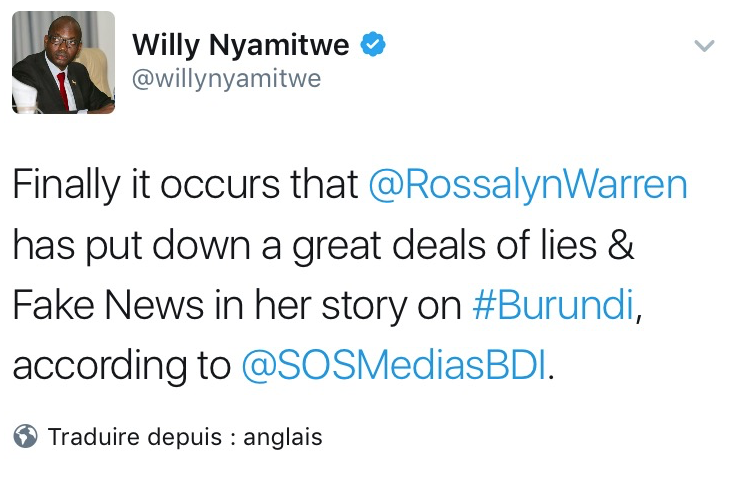 Twitter trolls have meanwhile used SOS Media Burundi’s statement criticizing the Guardian article as grounds for claiming that SOS Media Burundi’s journalists and coordinator, Eloge Willy Kaneza, support the government’s denunciation of the international media. This is very damaging for these journalists, who constantly strive to report the truth about what is happening on the ground in Burundi. 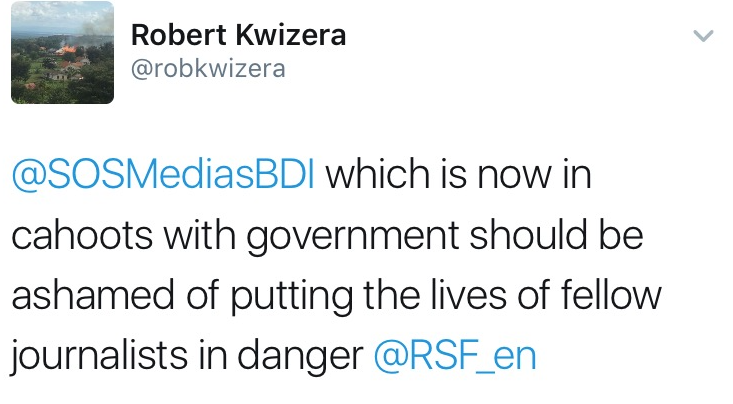 In Burundi, any report or statement is nowadays interpreted as being for or against the regime. This has been the case since 2015 and the ensuing flight of around 360,000 of the country’s inhabitants (a UNHCR figure that is disputed by the government). The space for critical, measured and objective opinion is shrinking by the day. The regime’s aim is to impose its version of events as the only one.

The offensive began in April 2015 with the closure of RPA, one of the regime’s leading critics. It peaked the following month with the closure of all the other independent radio stations, the flight of many journalists and repeated, serious harassment and violence against the journalists who stayed. And it continued until journalist Jean Bigirimana’s still unsolved disappearance in July 2016.

The government finally realized that its persecution of journalists and media outlets was affecting how it is seen by the international community, whose funding it needs. So it tried to persuade some of the closed radio stations, above all Isanganiro and Radio Bonesha, to reopen.

This worked in the case of Isanganiro, which resumed broadcasting in March 2016 after signing an undertaking that imposes considerable restrictions on its editorial freedom. Government officials often call Isanganiro’s director to discourage coverage of certain stories. The instructions issued to the station’s journalists limit the freedom with which they cover stories and many of them censor themselves as a protective measure.

The government has also created new media outlets such as Buja FM and a newspaper called Ikihiro (Kirundi for “How it is”). But they do not cover violence and human rights abuses.

This is left to the exile media (described as “enemies of the nation” by the government) and to the two independent media outlets still operating inside the country, Iwacu and SOS Media Burundi. But, to protect themselves, Iwacu and SOS Media Burundi just report the hard facts and refrain from any comment or analysis that could lead to reprisals. Political discussion and analysis can only be found on social networks.

As a result, coverage of events in Burundi is usually incomplete and manipulated, with biased terminology and virulent comments only too often replacing objective reporting that serves the general interest.