Reporters Without Borders (RSF) condemns the abrupt decline in respect for media freedom in Democratic Republic of Congo, which fell two places to 152nd position in the World Press Freedom Index published yesterday after its Index “score” suffered the third biggest fall of any country in Africa.

Local elections and provincial restructuring in 2015 already led to an increase in harassment of both state and privately-owned media. Ten media outlets have been closed or suspended, broadcasts have been banned, equipment has been seized and media premises have been ransacked in several regions.

“The DRC’s performance, in absolute terms, is more important than its Press Freedom Index ranking, which depends in part on the performance of other countries, and only two other African countries have suffered worse falls in their performance scores. Arbitrary detention, the disconnection of broadcast signals and intimidation are becoming routine. We are very concerned about the increase in all these forms of harassment of journalists and media outlets in the DRC.” Constance Desloire of RSF’s Africa desk

The data gathered for the Index show that the authorities are not doing enough to protect journalists. 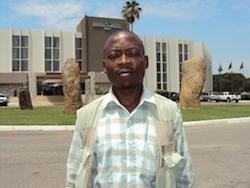 Neither the police nor the judicial system seems to guarantee the right to information in this extremely corrupt country. Mike Mukebayi, the founder of the newspaper C-News, was imprisoned for 11 months for covering a corruption scandal allegedly involving a cardinal.

The DRC government has also supported the Burundian regime’s attempts to crush all democratic media voices. Egide Mwemero, a Burundian radio technician with Bujumbura-based Radio Publique Africaine (RPA) who had fled to the DRC, has been held by the Congolese authorities since 13 October.

A decree issued by Sud-Kivu’s governor in February guaranteeing the protection of journalists was a significant step forward, as was a court decision in March imposing a jail sentence on an official who threatened a journalist.

“We hope that the country’s judicial authorities will continue on the same course and that 2016 will be the year that ends the rapid decline in respect for media freedom in the DRC,” Desloire added.

Go to the RSF website to find out more about the 2016 World Press Freedom Index and the method used to compile it.