Do you really know Azerbaijan, the country that sponsors Atlético Madrid? “Land of fire” according to the official propaganda but “land of repression” in practice. The millions of viewers who watch the UEFA Champions League Final on 24 May must not be fooled by the propaganda. This Caucasian republic is ranked 160th out of 180 countries in the press freedom index and its president, Ilham Aliyev, is a predator of press freedom who has eliminated almost all pluralism in his country

No fewer than 10 journalists and as many bloggers are in prison for displaying too much independence for the government’s taste. The journalist and human rights defender Parviz Hashimli was sentenced to eight years in prison on 15 May on trumped-up charges of “receiving” and “illegal sale of arms.” The government’s reach extends beyond its borders. It got Turkey to extradite Rauf Mirkadyrov, the independent newspaper Zerkalo’s correspondent, on 18 April. He was immediately jailed on a spying charge.

A biased regulatory authority and manipulation of the advertising market have given the government complete control of broadcasting. There is no independent TV station and a handful of independent newspapers struggle to survive. The leading one, Azadlig, is close to economic collapse as a result of astronomical damages awards and the press distribution company’s refusal to pay what it is owed from sales.

Azerbaijan’s government paradoxically became the guarantor of human rights in the European continent on 14 May, when it assumed the rotating presidency of the Council of Europe’s committee of ministers. Reporters Without Borders is outraged by this and calls on the Council of Europe’s 46 other members to remind Azerbaijan’s president of his duties as regards respect for freedom of information. 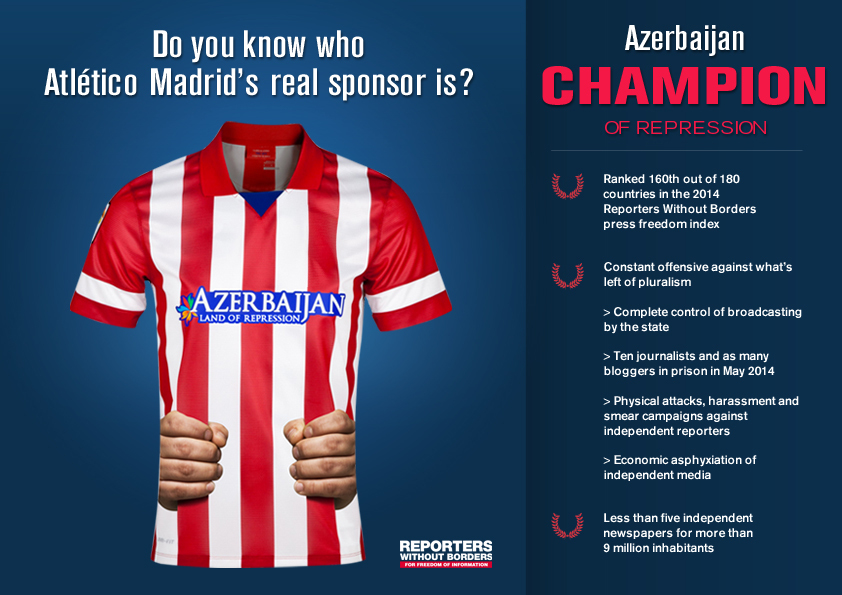