Alarming details about election-related violence against journalists in Mexico

From January to May of this year, Reporters Without Borders (RSF) and its Mexican partner, Propuesta Cívica, registered 45 attacks against journalists and four against media that were linked to the current elections in Mexico. These alarming figures show how journalism is being undermined and targeted by political actors, and increasingly so in the run-up to the poll.

These election-related attacks against journalists and media were monitored by RSF and Propuesta Cívica under a project called Press Alert / Alerta Prensa (#AlertaPrensa) that began in January and will continue until September. Broken down by type of attack and region, the attacks are being displayed month by month on the Press Alert monitoring and observation website.

The “attacks” registered by the Press Alert project include oral, written or online threats, acts of physical violence, smear campaigns in the media or online, and cases of judicial harassment linked to the elections to be held on 1 July, the most important in Mexico’s history. A total 3,406 public offices are being elected, including president, deputies, senators and the governors of nine of Mexico’s 20 states.

In the 40 attacks on journalists during the first five months of the year, a total of 45 journalists were affected, of whom 16 were women journalists. Together with the four attacks on media outlets, these alarming figures highlight the difficulty of covering elections in a country blighted by violence.

Eleven Mexican journalists were murdered in connection with their work in 2017. Another four have already been murdered so far this year (and a fifth case is being investigated). At the same time, the political class is also being targeted. At least 112 candidates and pre-candidates have been murdered in Mexico since September 2017. 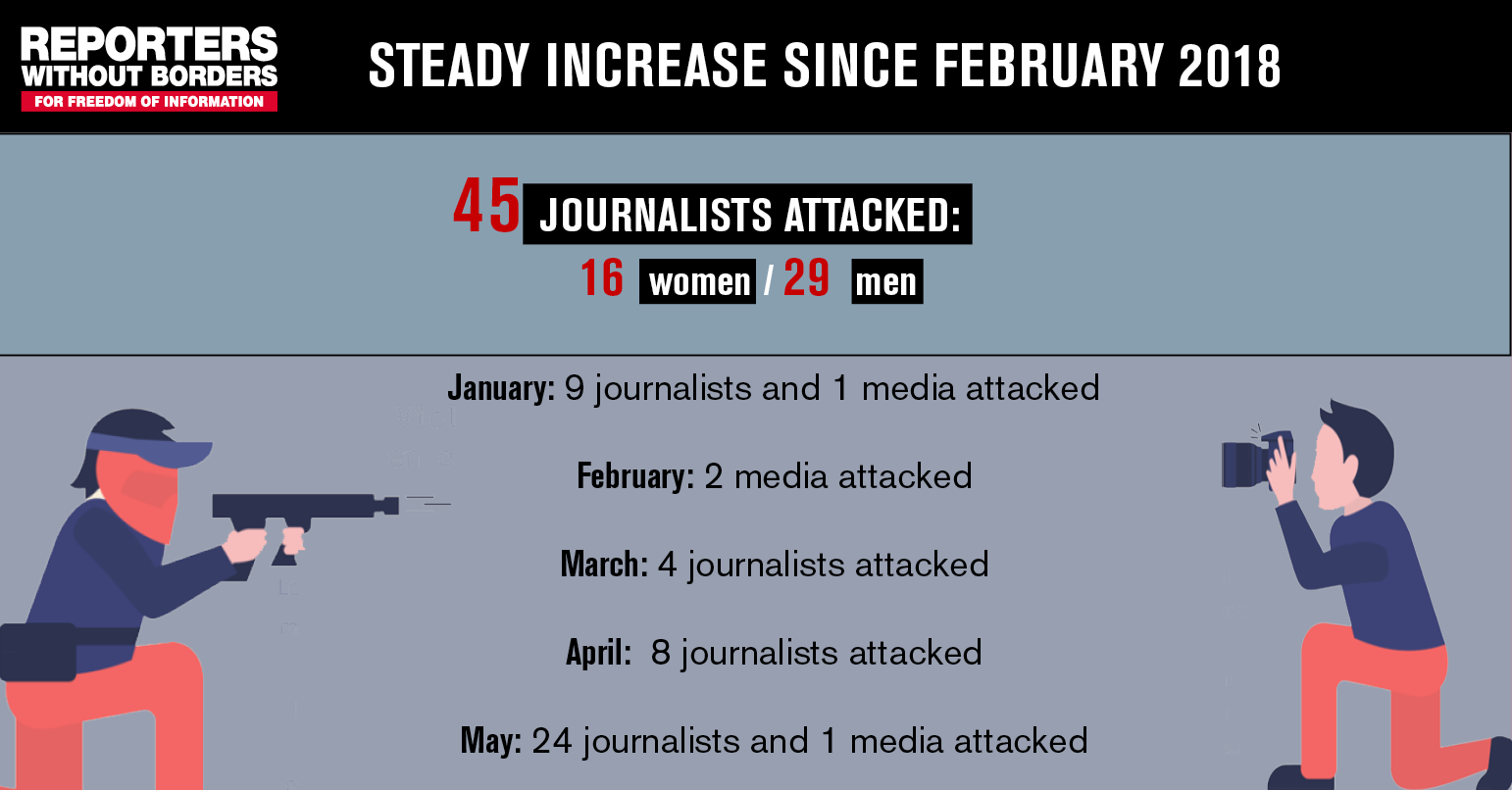 The number of attacks has been increasing as the elections draw nearer. Propuesta Civica observed the same trend when it carried out a similar monitoring project during the elections in 2012.

“We call on Mexico’s politicians and authorities, both federal and local, to do more to prevent the dangers associated with election coverage, and to reinforce appropriate protective measures and/or to propose new ones,” said Emmanuel Colombié, the head of RSF’s Latin America bureau. “The Mexican press as a whole must also address this problem and establish specific provisions for this kind of work.”

Propuesta Cívica director Sara Mendiola added: “The Mexican authorities must ensure respect for the work that these reporters do, because the importance of their work in the democratic process needs no further demonstration.” 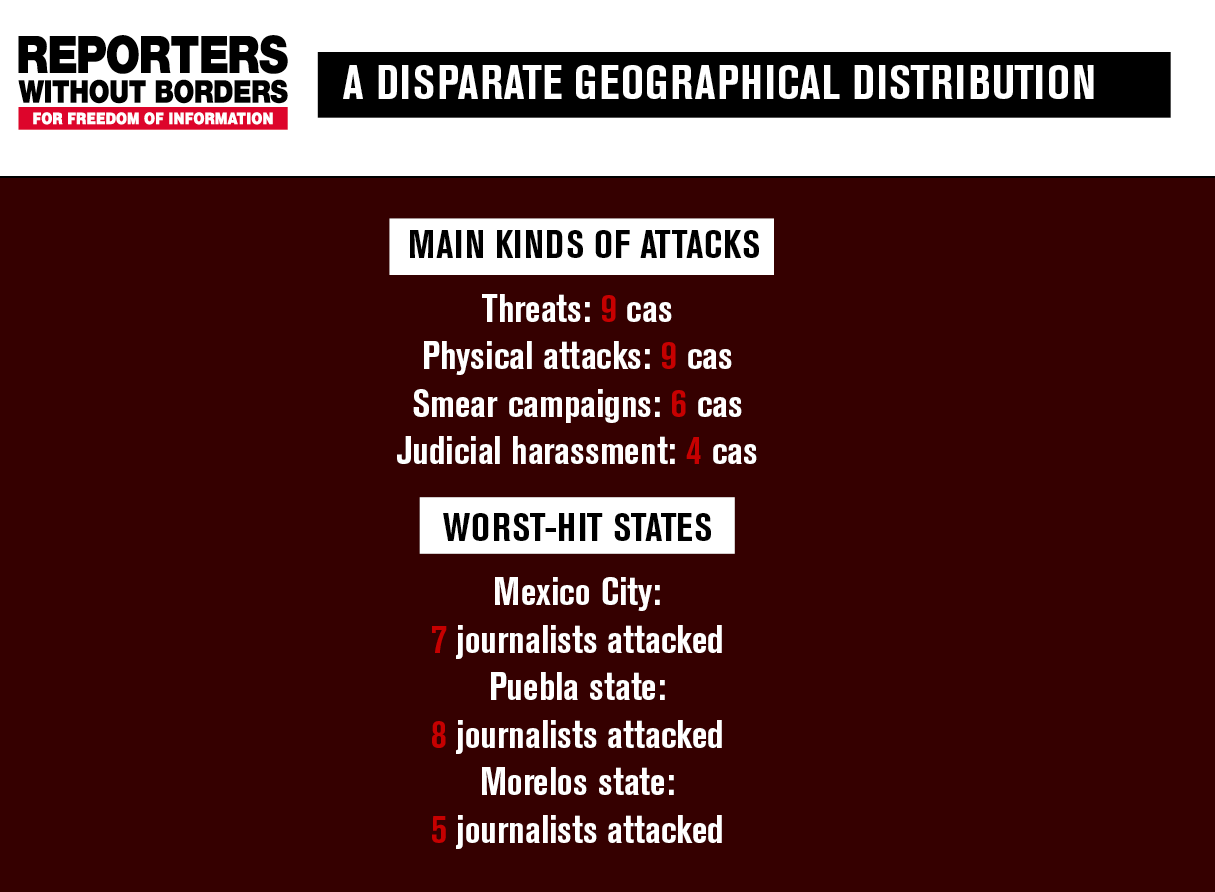 Mexico City, Puebla and Morelos, where most of the attacks were registered, are not among the most violent states for the media.

Attacks against journalists and media also occur in the states with the highest levels of violence and organized crime activity, such as Tamaulipas, Veracruz and Guerrero. But journalists in these states tend not to report such attacks for fear of reprisals. They also have to censor themselves much more, resulting in media coverage grey zones.

Reporters and columnists most targeted 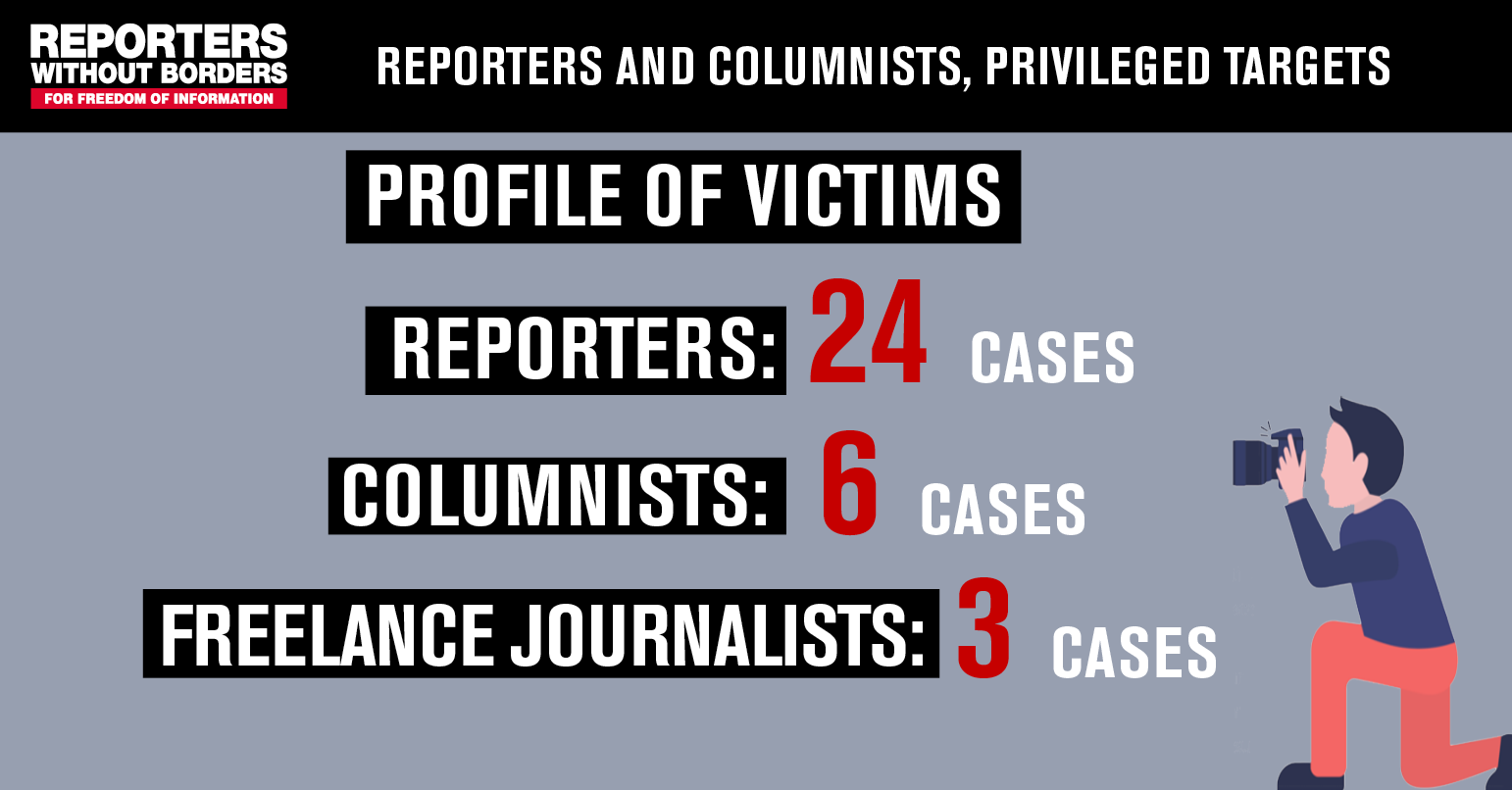 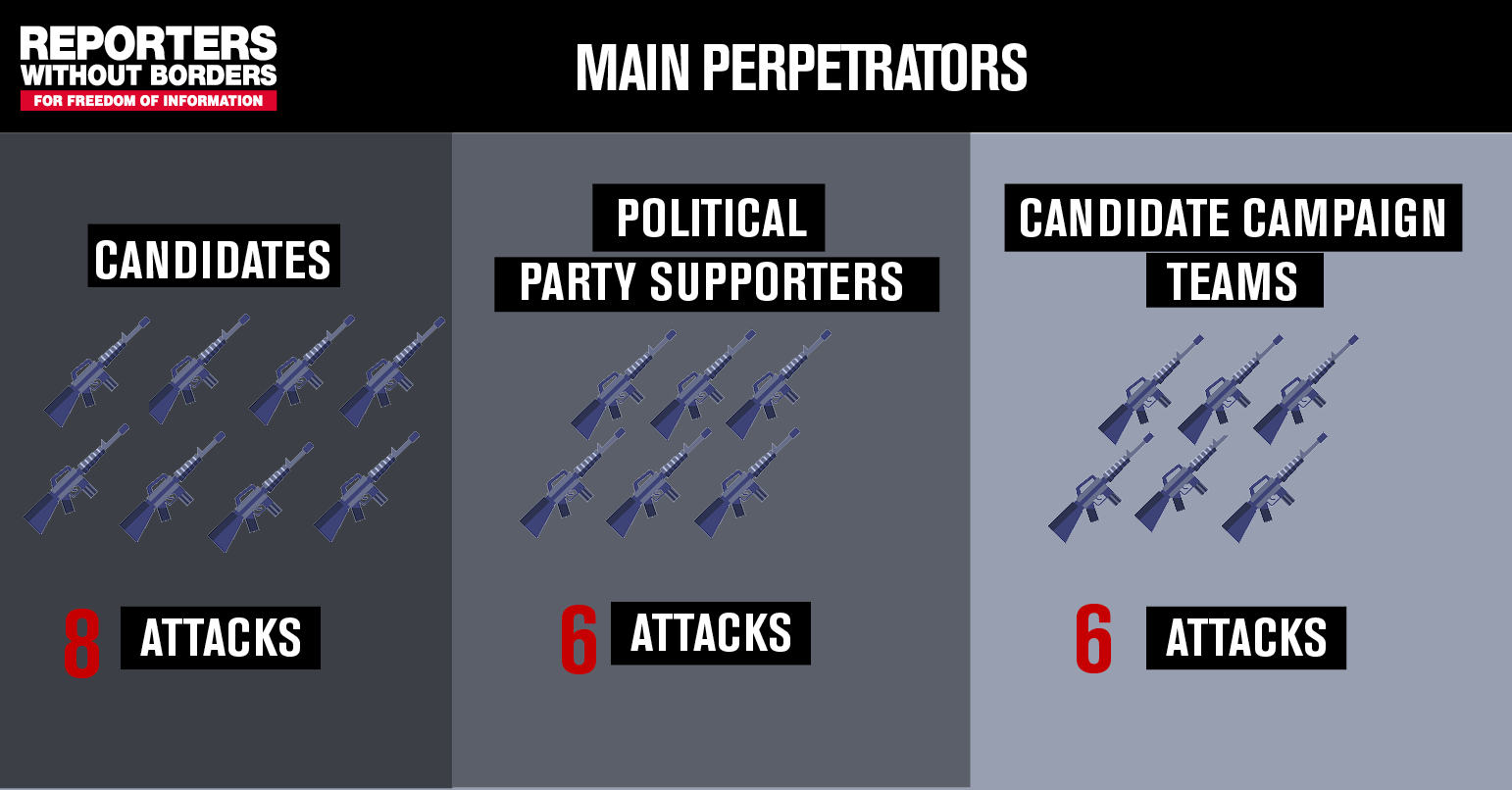 The eight candidates who perpetrated attacks are running for mayor, governor or senator.

These provisional figures on election-related attacks are very worrying. The steady increase in their frequency as the election gets nearer, the profile of the targeted journalists and the lack of effective protective mechanisms for election reporting are reinforcing an untenable climate of mistrust and danger for Mexico’s journalists, who are already exposed to a level of violence that is without parallel in the West.

In the cases monitored by the Press Alert project, none of journalists sent into the field to cover campaigns – often to dangerous regions – had specific equipment or had been given appropriate training for this kind of work, and therefore did not know how to respond or where to turn in the event of this kind of attack.

RSF and Propuesta Cívica will hold a press conference today to present these figures. Journalists who attend will be given fact sheets with the contact details of entities to which attacks can be reported and which can advise on how to deal with them.