The 2020 pandemic has challenged press freedom in Africa

In partnership with Cartooning for Peace, Reporters Without Borders (RSF) presents a summary of infringements of press freedom in Africa arising from the coronavirus epidemic. RSF calls on the continent’s governments to learn the lessons of the 2020 health crisis, which has seen growing brutality towards journalists, media outlets struggling financially, a lack of transparency and repressive legislation, and to refrain from further undermining the production of independent news and information which has been sorely tested on the continent.

On 24 March, Tholi Totali Glody, a journalist with the Alfajiri TV, a flagship TV station in Haut-Katanga province in the Democratic Republic of Congo (DRC), was chased by the police and knocked off his motorcycle after explaining that he was reporting on compliance with the lockdown imposed by the provincial governor. He ended up in hospital with a broken leg in plaster.

A few days later in South Africa, Azarrah Karrim, a News24 reporter, was filming compliance with the lockdown when she came under fire from rubber bullets fired by the police. When she complained, police officers joked: “They missed you? What a waste!”

When not being physically attacked as they cover the epidemic, journalists are often arrested. Kufre Carter, a journalist with the local radio station XL 106.9 FM in south-western Nigeria, was arrested on 27 April by the State Security Service, a unit responsible for domestic security and counter-terrorism. He was accused of conspiracy and defamation and spent a month in custody for criticizing the local authorities’ handling of the health crisis.

At the time of writing, Dieudonné Niyonsenga, who runs the Rwandan YouTube news channel Ishema TV, remains the only African journalist in prison for violating the country’s COVID-19 lockdown regulations. At the time of his arrest he was reporting on the effects of the lockdown on the population and investigating allegations of rape committed by soldiers enforcing the lockdown.

Some were forced to flee to escape the worst.  Eugene Dube, editor of the Swati Newsweek website, fled Eswatini (formerly Swaziland) after questioning the authorities’ handling of the epidemic. In Africa’s last absolute monarchy, any criticism of King Mswati may be treated as “high treason”, punishable by the death penalty.

Paul Nthoba, editor of the South African community newspaper Mohokare News, fled to Lesotho after he was threatened and assaulted by police during a lockdown enforcement operation. It was the first time in post-apartheid South Africa that a journalist had been forced to flee abroad as a result of his work.

At the height of the crisis between 15 March and 15 May, three times as many journalists were  assaulted (23) and arbitrarily arrested (31) in sub-Saharan Africa compared with the same period in 2019, according to RSF’s #Tracker_19 tool for monitoring and evaluating the impact of the coronavirus pandemic on journalism. It recorded 109 infringements of press freedom on the continent since the start of the health crisis. Of the 48 countries in sub-Saharan Africa, 29 have seen at least one breach of freedom of news and information on the subject. However, Nigeria (15 cases), Zimbabwe (14) and Uganda (12) together account for 38 per cent of the registered violations.

“This thorough report is a telling sign of the great hostility and mistrust towards African journalists and media outlets, which are too often regarded as enemies rather than allies in the fight against the coronavirus,” said Arnaud Froger, the head of RSF’s Africa desk.

“In response to uncertainty and the unknown, many governments have chosen strong-arm tactics, preferring the bludgeon to the pen, and censorship to investigating the truth of the epidemic. Crackdowns, the withholding of information and the criminalization of journalism are inadequate responses to the tremendous challenges facing us in this epidemic.

“We call on the countries of the continent to draw the lessons from this year’s health crisis, including the increasingly indispensable role played by journalists in providing access to reliable and high-quality news and information, by guaranteeing them greater freedom, protection, financial support and broad and transparent access to public data.” 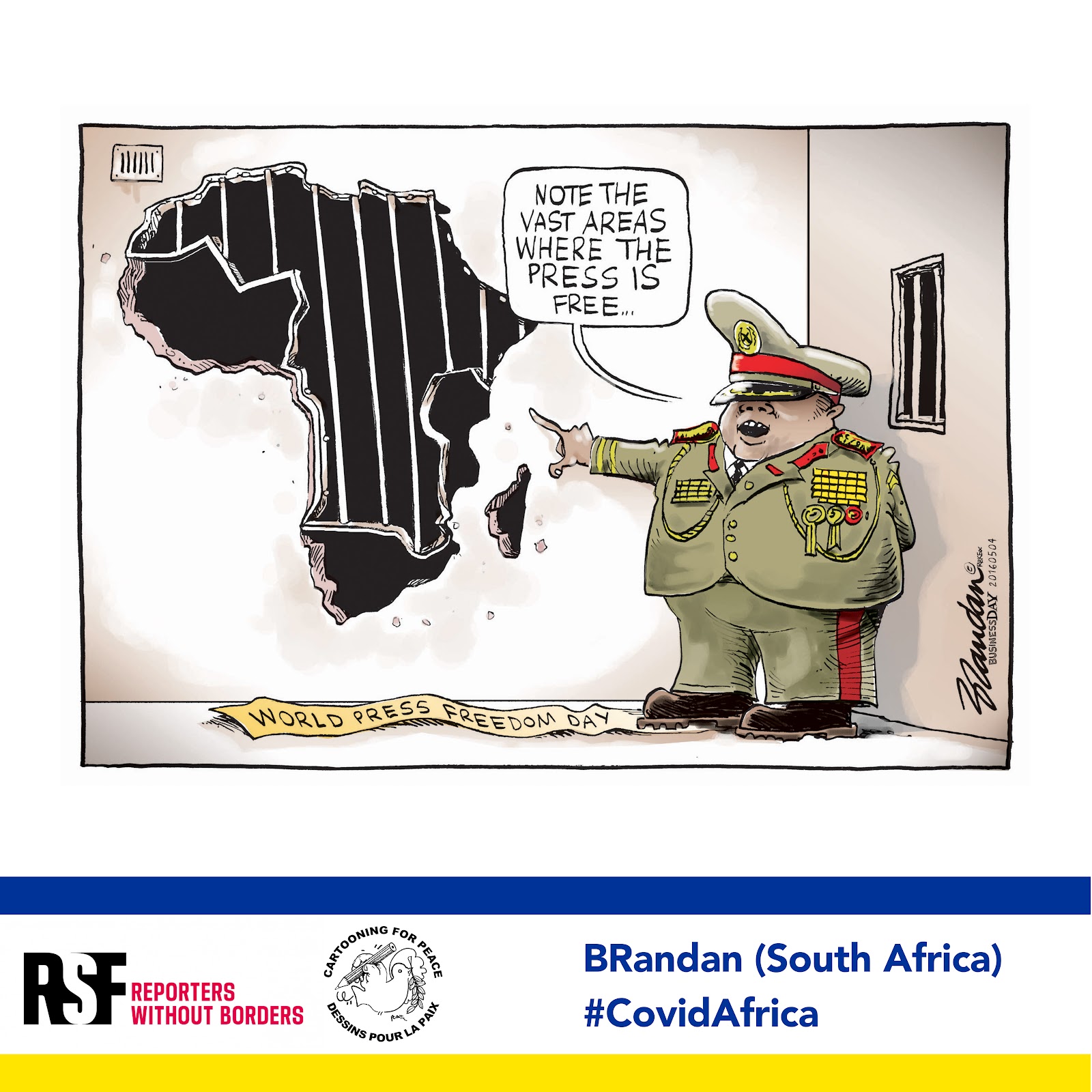 In some countries the health crisis has aggravated the severe threats and pressures that already weighed on journalists before the epidemic. Since 2016 Tanzania, whose president John Magufuli has just been re-elected for a second term, has fallen 53 places in the World Press Freedom Index (to 124 of 180 countries). In April the president decided to stop publishing details about the infection in the country while referring in his speeches to a “Western plot”.

In the worsening climate, in which self-censorship became the rule in order to avoid trouble, the news blackout made coverage of the epidemic and its effects almost impossible for Tanzanian journalists, as RSF pointed out in a report a few weeks ago.

Several news outlets, including the country’s leading Swahili-language newspaper Mwananchi, were closed down after publishing stories about Covid-19.  Others were forced to broadcast apologies after carrying reports on the subject which angered the authorities.

In countries where independent news and information is closely monitored or banned altogether, coronavirus has been subjected to censorship. The government of the world’s longest serving leader, Teodoro Obiang, president of Equatorial Guinea for the past 40 years, suspended “Buenos días Guinea” (Good morning Guinea), a popular Spanish-language programme broadcast by the country’s only commercial station Asonga TV which is owned by the president’s brother. The programme’s seven journalists were laid off after it aired a report on violence carried out by soldiers enforcing the lockdown. After braving censorship or lack of transparency in investigating the reality of the pandemic in their countries, some journalists have been targeted for major retaliation. In early April, journalist Andjouza Abouheir of La Gazette des Comores in the Indian Ocean nation of Comoros, exposed the reality behind a mystery that raised doubts among the archipelago’s citizens: The country reports no coronavirus cases. The reason, the journalist’s investigation showed, is that samples from the first suspected cases were not tested. Her revelation angered the authorities. They tried to identify her sources and even threatened to prosecute her for publishing information without going through “official channels.”

The government did not follow through on those threats. But other journalists have been gaoled following their revelations. In Zimbabwe, investigative journalist Hopewell Chin’ono spent nearly six weeks behind bars. Officially charged for a tweet which mentioned an anti-corruption demonstration planned for late July, he had just covered a case involving overbilling for medical equipment to be used against Covid-19. A number of well-connected figures were involved, and the health minister was dismissed.

In the Democratic Republic of Congo, caution can border on self-censorship. “Information on the diversion of public funds for combating the coronavirus has circulated in newsrooms,” says Tshivis Tshivauadi, secretary-general of Journalist in Danger, a Congolese press-freedom NGO  and RSF partner organization. “But journalists who dare to publish this information would risk prosecution.” Congolese media law, adopted in 1996, sets out prison terms, and even capital punishment, for some press crimes. 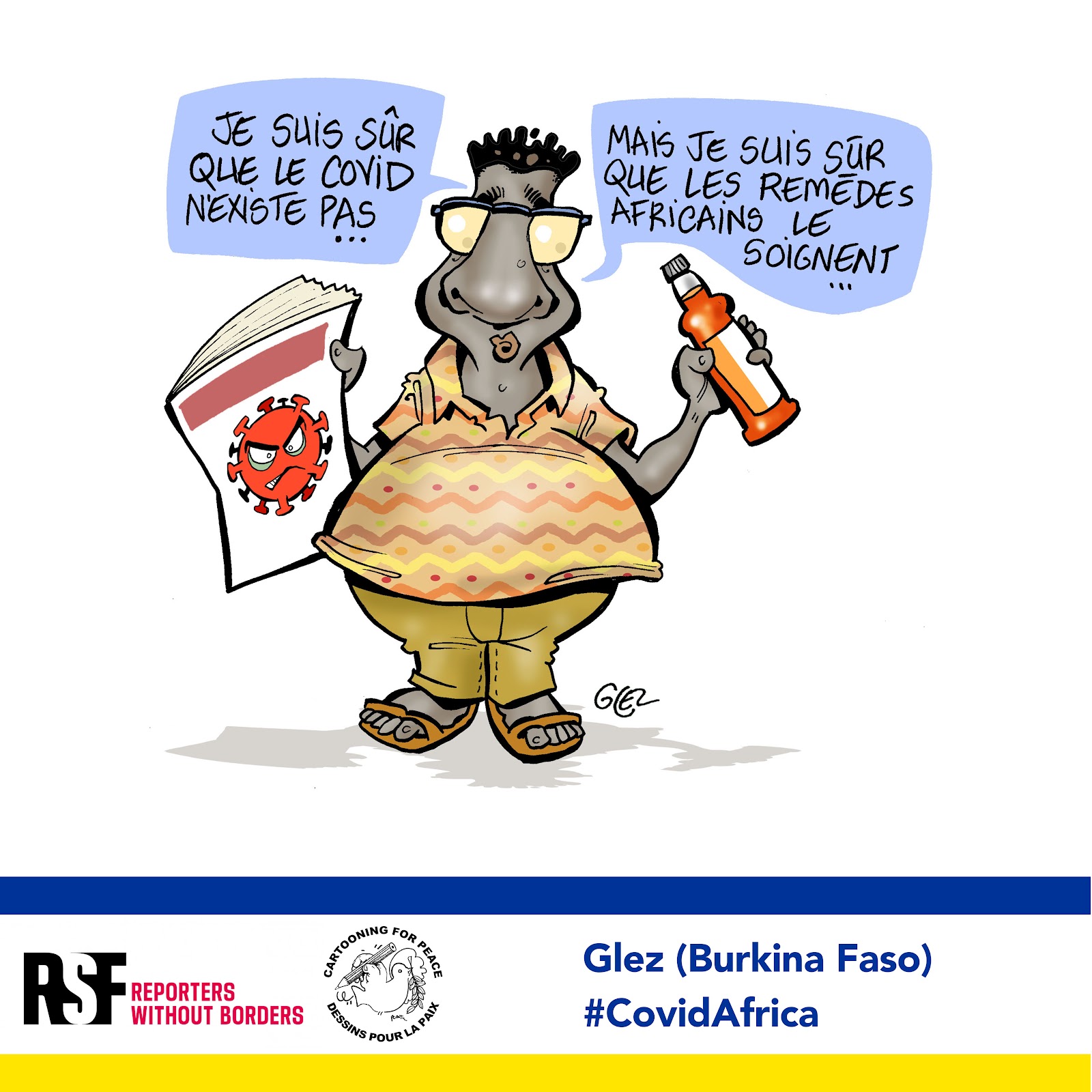 Decriminalization of press offenses on the continent remains a distant goal. Meanwhile, many countries have yielded to the temptation to adopt draconian information laws. These laws have proven ineffective against the spread of disinformation, far-fetched notions and conspiracy theories about the coronavirus. Yet, they significantly threaten to create grave risks for journalism, especially if they outlast the public health crisis. In March, South Africa amended its law on disaster management, which now sets penalties of up to six months in prison for spreading fake news.

Tanzania, the African country that has toughened its laws more than any other during this period, published in July a new regulation that drastically restricts freedom of information.  Prohibitions now include publishing “information with regards to the outbreak of a deadly or contagious diseases in the country or elsewhere without the approval of the respective authorities.” Violations carry penalties of up to one year in prison and fines of up 1700 euros. A few weeks later, Tanzanian media were prohibited from broadcasting any foreign content without prior government authorization. 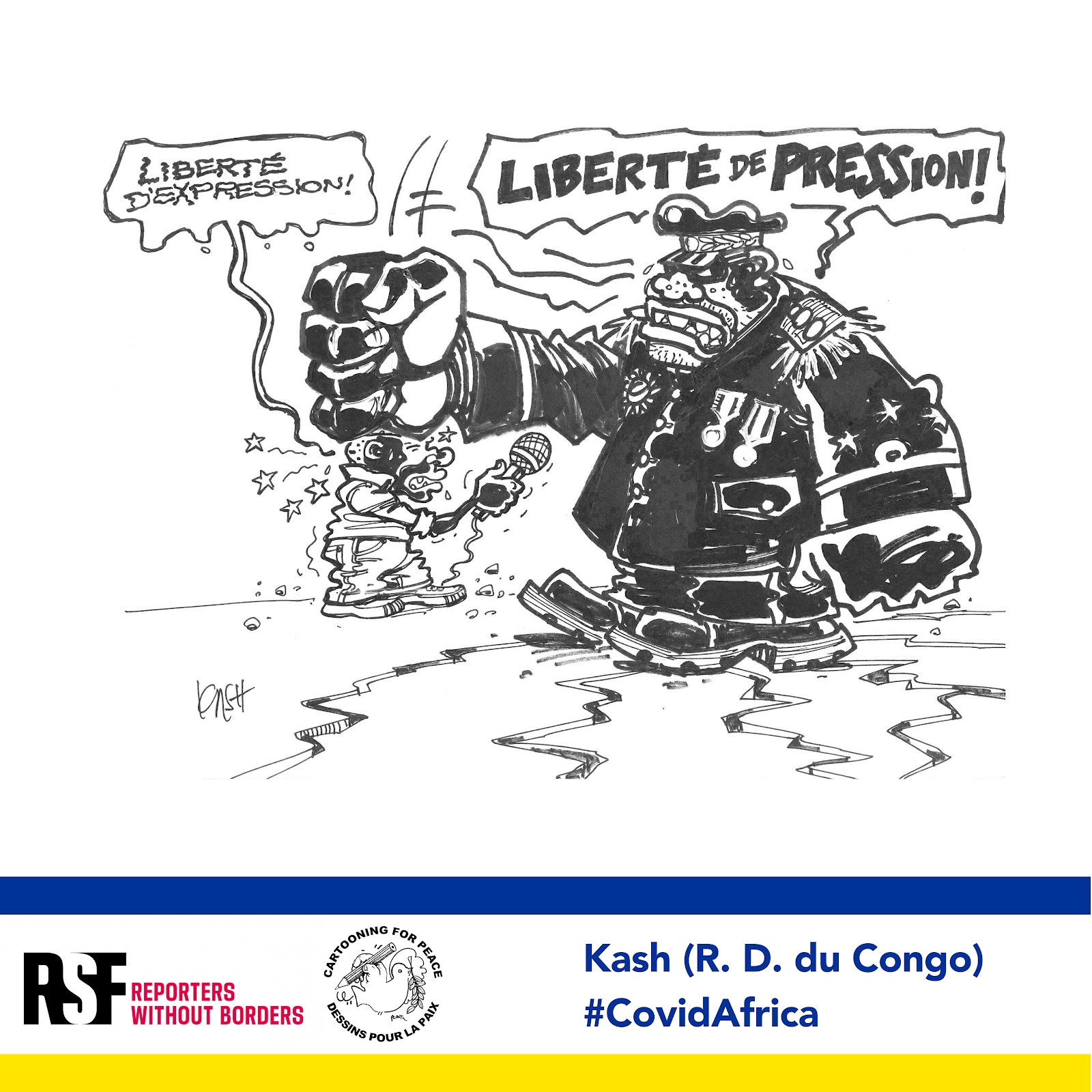 The final consequence of the public health crisis, and perhaps the most serious one for African journalism, is that the already fragile news ecosystem has never been so overwhelmed. In Senegal, a report commissioned by the Press Publishing and Circulation Council reported a 70 per cent revenue loss for the written press during the first four months of the pandemic, 54 per cent for television networks and 40 per cent for radio stations and news sites. Throughout the continent, the bottom line is alarming. In Kenya, “Three hundred journalist jobs have been eliminated, newspapers are printing far fewer pages and some audio-visual media have replaced news programmes with music broadcasts,” says Eric Oduor, secretary-general of the Kenyan journalists’ union. In Nigeria, some journalists are supplementing their incomes by farming and raising chickens in order to meet their families’ needs.

Government support has been rare and insufficient. In Cameroon, 20 newspaper owners organized a “day without the press” on 4 May to call attention to the situation. Nine of the ten demands that led to the action focused on the sector’s economic fragility, worsened by the public health crisis and the absence of official support.

“With this public health crisis, the sustainability of media organizations becomes not only a major factor in the future of public debate and democratic societies but an indispensable condition for guaranteeing the right to information,” said Assane Diagne, director of RSF’s West Africa office. “The public health crisis poses an existential threat to independent information production in Africa. This calls for re-imagining the media ecosystem on a continent where public subsidies are too rare and where the web giants scoop up a great part of the revenue generated by journalism.”

In South Africa, where the information sector is among the hardest hit by the economic crisis brought on by the pandemic, the South African National Editors’ Forum reports that nearly 700 journalists have lost their jobs, and that about 80 publications have closed. “This devastation is unprecedented in its scope,” Sbu Ngalwa, the Forum’s president, told RSF. “It will be impossible to recover completely, but we do not want to belong to the generation that let the media die.”

Overview by the numbers

Since 14 March in sub-Saharan Africa, RSF has registered:

RSF belongs to a consortium of organizations with ARTICLE 19, Deutsche Welle Akademie, Fondation Hirondelle, Free Press Unlimited, International Media Support, and UNESCO for the project COVID-19 Response in Africa: Together for Reliable Information. Funded by the European Commission’s Directorate-General for International Cooperation and Development (DG DEVCO), this project is aiming at fostering and supporting journalism in Subsaharan Africa amid the Covid-19 sanitarian crisis.