Reporters Without Borders (RSF) and TV5-Monde will award their 2017 Press Freedom Prize on 7 November. The ceremony will be held as part of the World Forum for Democracy in Strasbourg and there will be three laureates, a journalist, a citizen-journalist and a media outlet.

The annual RSF-TV5 Monde Prize has been drawing attention to the importance of the freedom to inform since 1992 by honouring journalists and media outlets that have made a noteworthy contribution to the defence or promotion of this freedom. Each award comes with 2,500 euros in prize money.

In the journalist category: 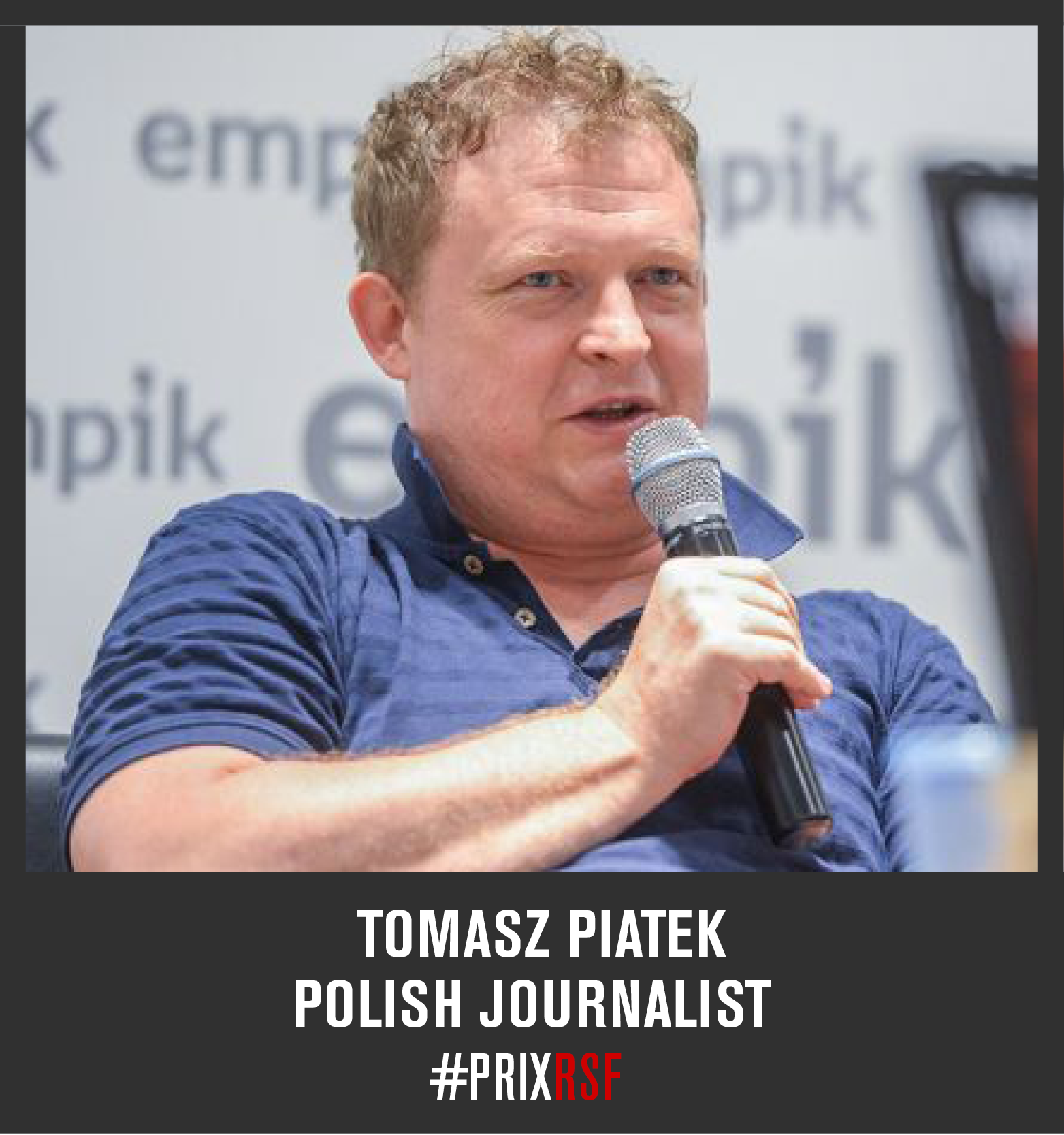 “Just two years ago, it would have been inconceivable for a journalist to be tried by a military court, but the aim of this case is to intimidate the entire profession,” Tomasz Piatek told RSF in July. An investigative reporter for the left-wing daily Gazeta Wyborcza, Piatek is facing the possibility of being prosecuted by a military court by defence minister Antoni Macierewicz over “Macierewicz and his secrets,” a book that sheds a critical light on his relations with persons linked to the Russian intelligence services. Piatek is facing a possible three-year jail sentence. He has also been the target of angry verbal attacks in the pro-government media and threats ever since his book’s publication. 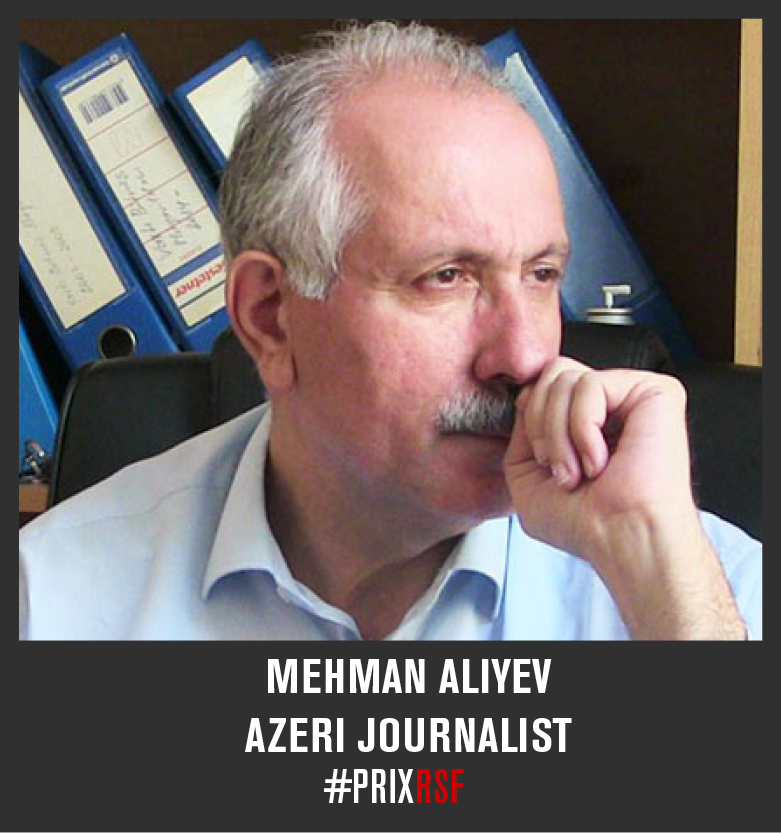 Mehman Aliyev is one of the pioneers of journalism and the fight for independent reporting in Azerbaijan. Resisting Soviet censorship, he and a few friends created the Turan news agency in May 1990. A generation later, Turan is the only remaining independent media outlet in a country ranked 162nd out of 180 in RSF’s World Press Freedom Index. Producing dispatches in three languages, Turan has become an essential news source thanks to the professionalism of its reporters, who don't hesitate to cover even the most sensitive subjects. The escalating repression finally caught up with Mehman Aliyev in August of this year when he was jailed, and Turan was forced to suspend operations. Thanks to international pressure, he was freed three weeks later and he is now eager to resume his work with his team, whatever it takes. 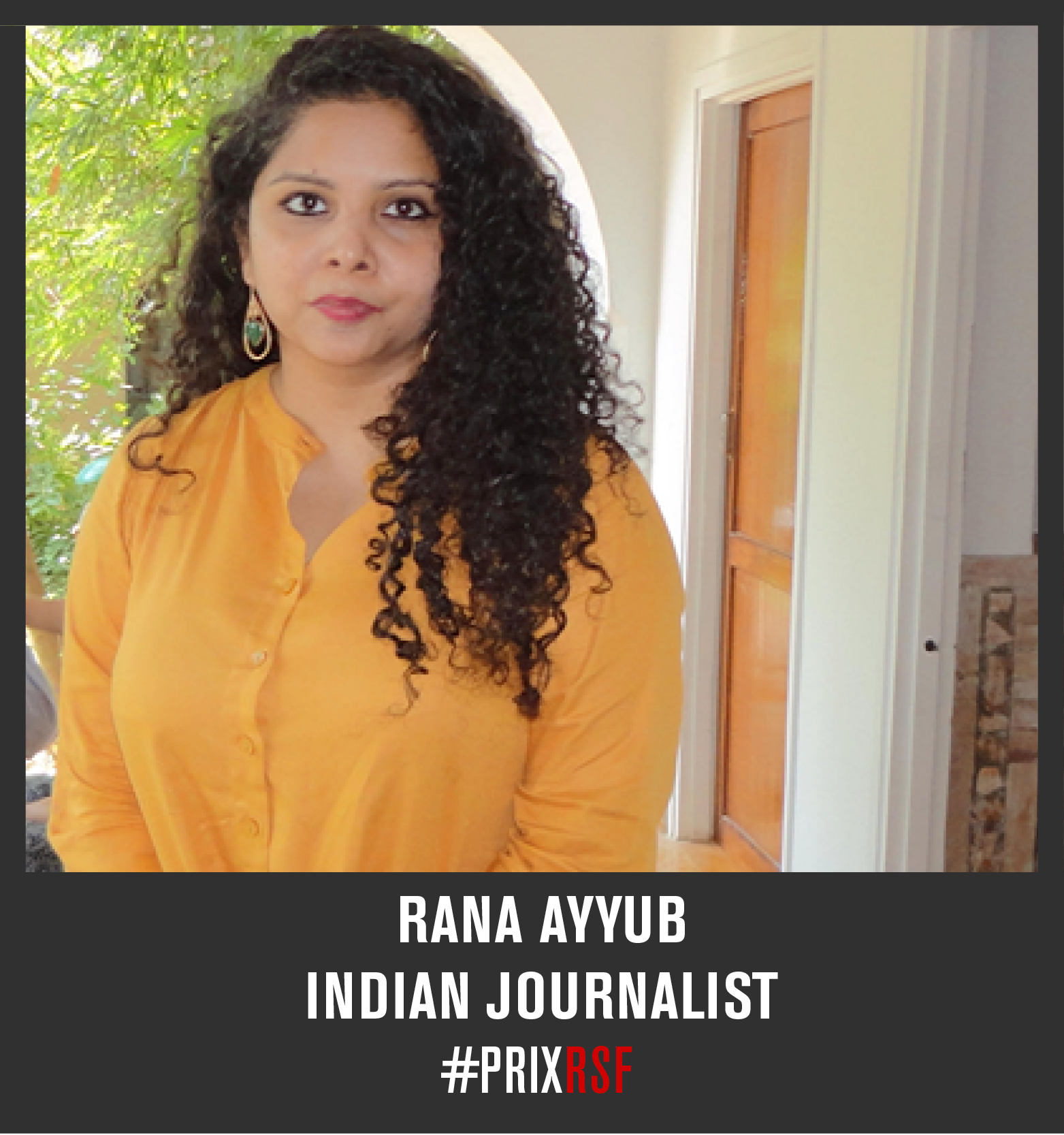 Independent journalist Rana Ayyub targeted India’s all-powerful Prime Minister Narendra Modi by conducting an undercover investigation into the origins of his power and his nationalistic discourse in the state of Gujarat. Defying the harassment and self-censorship that undermines journalism in India, her book, “Gujarat Files: Anatomy of a cover up,” challenges Hindu extremism and the caste system, shedding light on the massacre of Muslims in 2002. As a result, she has been the target of hate messages from government supporters, and has been hounded and threatened. Her commitment and situation are akin to those of Gauri Lankesh, a friend and fellow journalist who was tragically murdered on September 5, 2017.

Masoumeh Hidary, 35, runs Radio Sahar, a radio station presented by women for women. It covers issues such as violence against women, their place in society, and how they are regarded in the provinces where traditions are strongest. Hidary previously worked as a reporter and presenter for several radio stations in Herat province and for various national media including the state radio and TV broadcaster. Radio Sahar was first launched in 2004, after the fall of the Taliban government, but stopped broadcasting in 2010 because of financial and security problems. It resumed operations under Hidary’s leadership in December 2016.

A leading Mexican journalist who never minces words about her country’s rulers, Carmen Aristegui anchors the CNN en español program “Aristegui” and edits the Aristegui Notícias news website. She has been the target of work-related threats and harassment for years, above all because of her acerbic criticism of the government. The files of several ongoing stories were stolen when the offices of Aristegui Notícias were burgled in November 2016. In June 2017, the government was accused of using sophisticated spyware to hack into the phones of journalists and others in order to monitor their activities. Aristegui, who had just exposed a scandal implicating the president and his family, was one of the main targets of this extensive illegal surveillance operation. The quality of her work has won her many international awards.

Arrested in December 2013, Tehran-based photographer Soheil Arabi was mistreated and subjected to solitary confinement for two months to force him to confess to involvement in creating a Facebook network that blasphemed Islam and criticized the government. A long judicial saga ensued in which he was initially sentenced him to three years in prison, 30 lashes, and a heavy fine. A few months later, he was retried and sentenced to death, but the death sentence was eventually overturned and in September 2015 he was sentenced to seven and a half years in prison. In July of this year, his wife was arrested and was held for eight days, and she is still being subjected to threats and harassment. Arabi began a hunger strike at the end of August.

In the media category 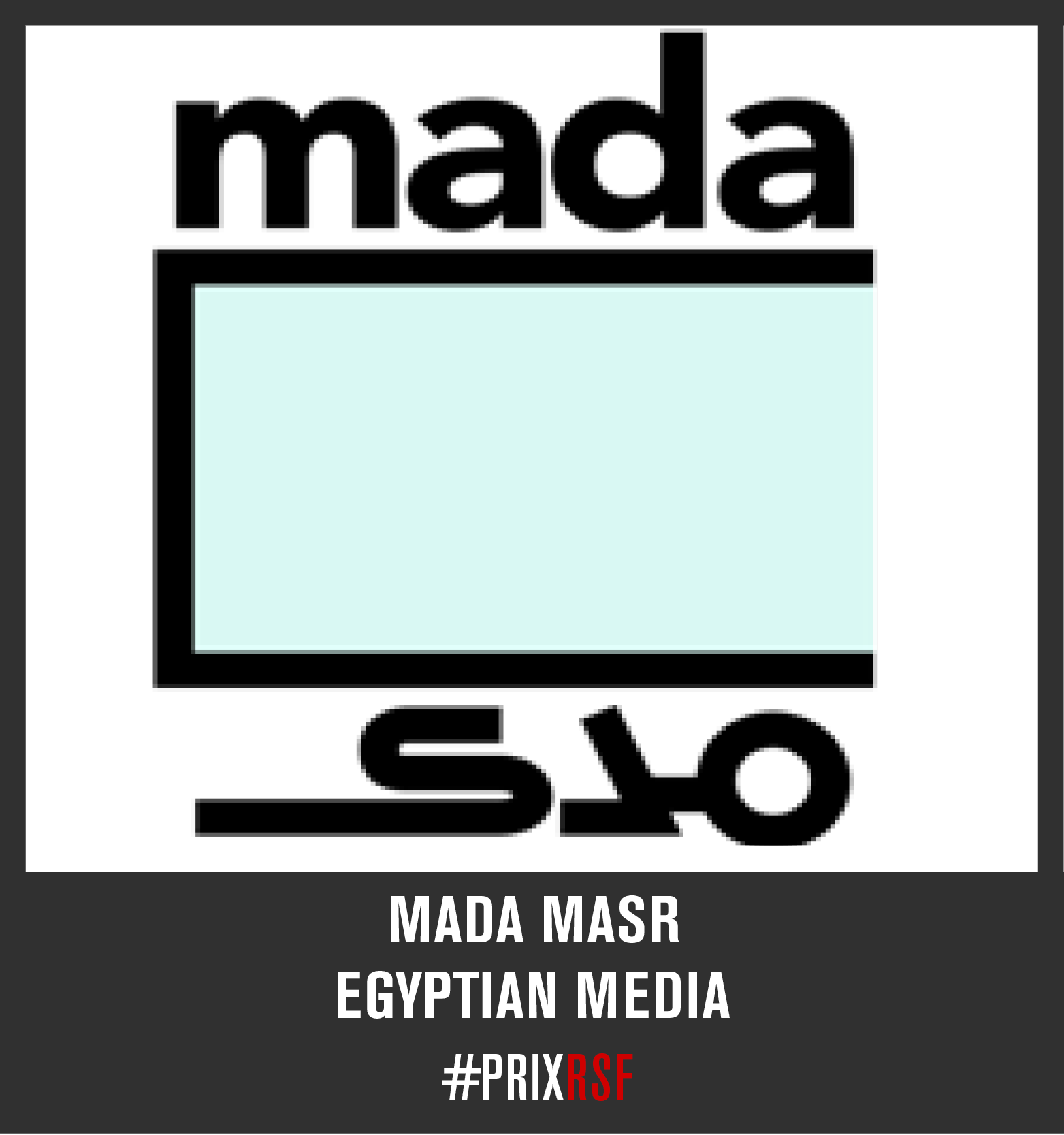 The online newspaper Mada Masr is a key source of news about Egypt for both Egyptian and international readers, covering sensitive subjects usually unacknowledged by other Egyptian media. It was launched in 2013 by a group of young journalists who had learned their trade at Egypt Independent, a newspaper that was shut down after publishing an article criticizing the armed forces. Produced in Arabic and English-language versions, Mada Masr is now also censored because it strives to provide concerned reporting from an independent viewpoint. It was one of the first websites to be hit in May 2017, when the authorities began imposing a digital blackout that is now blocking access to hundreds of sites within Egypt. Since then, Mada Masr has also been posting its articles on its Facebook page 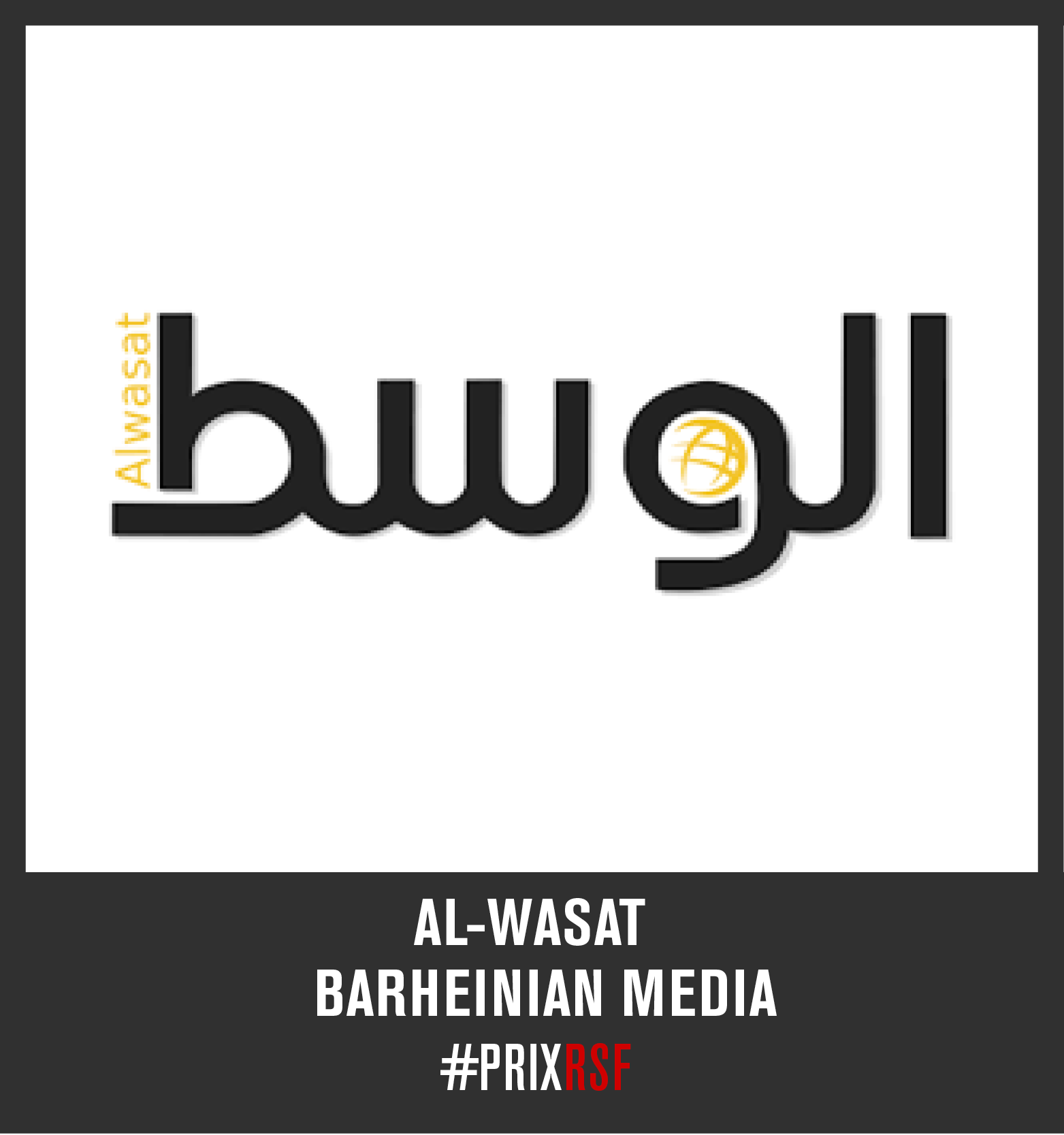 This independent Arabic-language newspaper was the last bastion of free speech in the Kingdom of Bahrain, where outspoken journalists and commentators are persecuted and risk long jail sentences on trumped-up charges. After being in the regime’s sights for years, Al-Wasat has been closed arbitrarily since June 5 for “repeated law-breaking.” It is accused of inciting divisions and trying to undermine Bahrain’s international relations in an article about the recent protests in Morocco. The newspaper has been shut down several times since its creation in 2002, but was more recently forced to fire all of its staff (more than 160 employees), which has endangered its chances of survival. 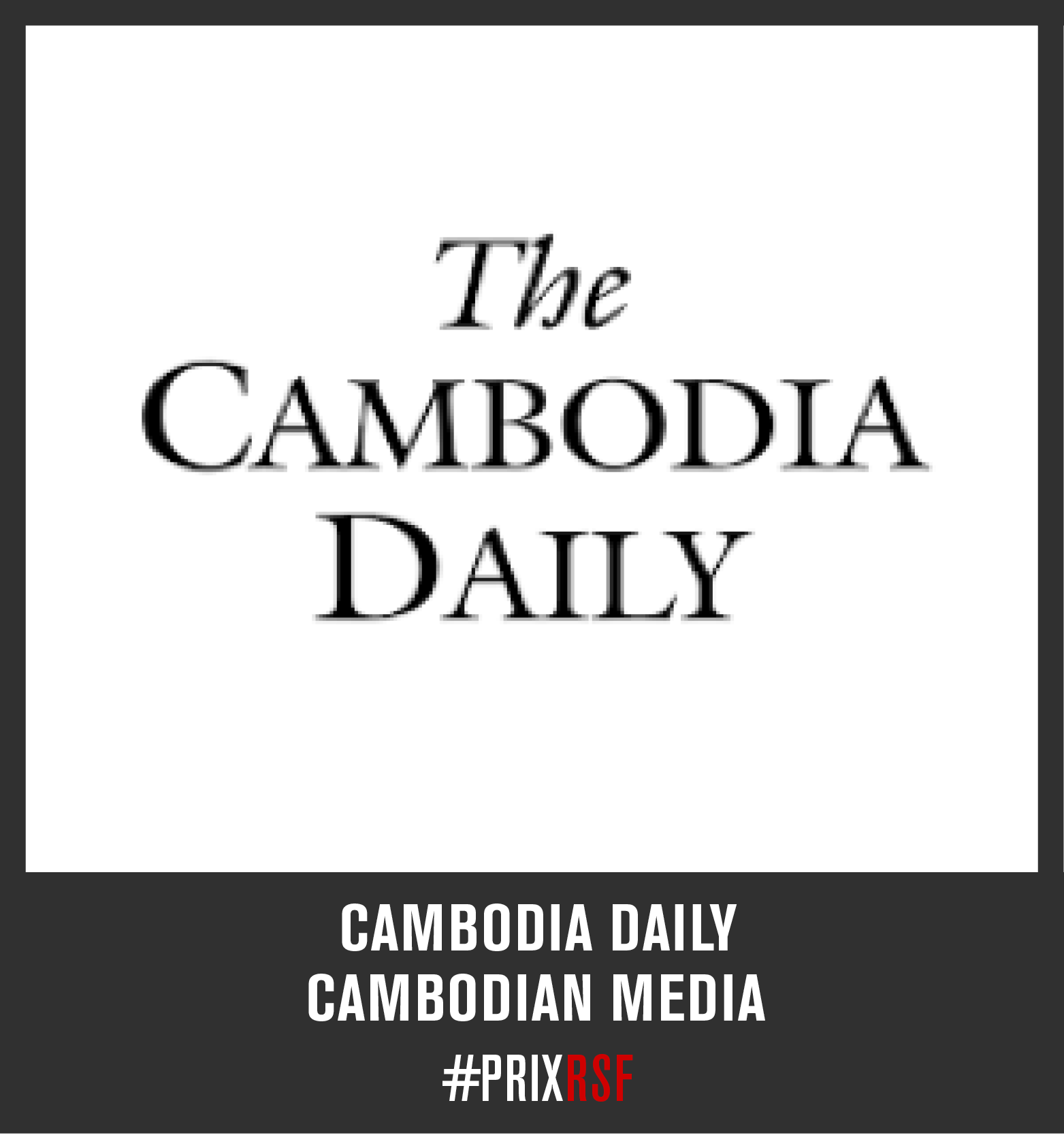 Launched in 1993 with the aim of contributing to the advent of a free press in Cambodia, the Cambodia Daily has just been forced to close by the government’s fiscal harassment, printing its last issue on September 4. Publishing in both English and Khmer, it was a source of independently reported news and information for nearly a quarter century in a country where most of the media follow government directives. Its 30 or so staff members never hesitated to expose cases of corruption or attacks on the environment. It finally fell victim to a new offensive against media freedom launched by Prime Minister Hun Sen’s government in the run-up to a general election in 2018. The newspaper still has an online presence. 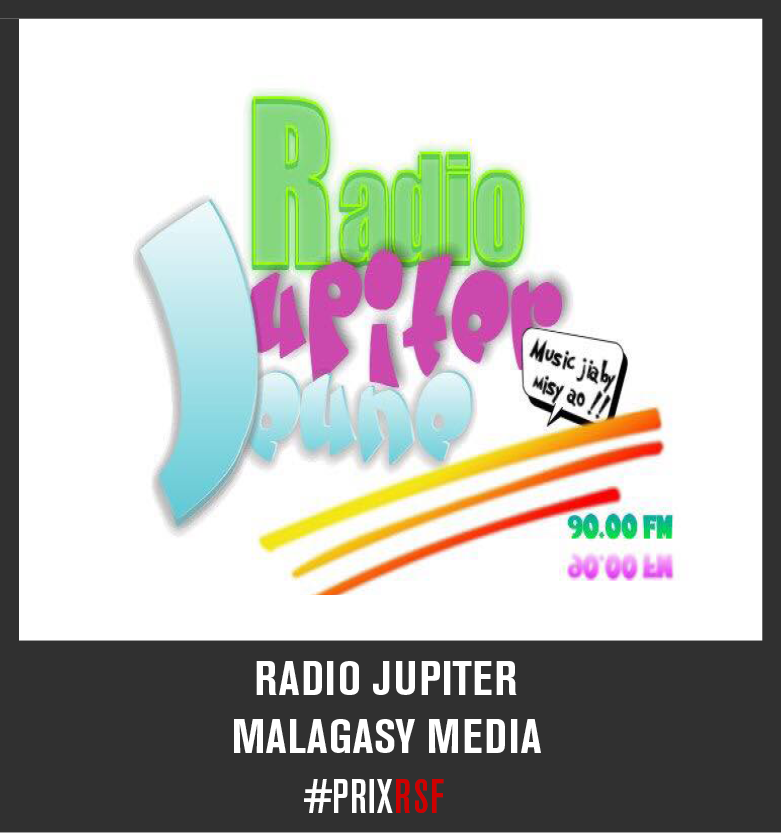 Created in 2002 in the southern mining town of Ilakaka, Radio Jupiter is one of Madagascar’s few independent radio stations. Its founder, Fernand Cello, has never stopped exposing collusion between the local authorities and privately-owned companies. The station fell victim to an arson attack in 2005 but managed to reopen in 2012. It was deprived of power in August 2016 after criticizing the local power company but was able to continue operating by acquiring solar panels. After Cello accused a mining company, Gondwana, of operating illegally, the police confiscated the radio station’s transmitter in December 2016 and the authorities opened proceedings against Cello on a charge of “inciting rebellion.” Arrested after being hospitalized in May 2017, he is still in prison pending his judgement. Charges have meanwhile been brought against Gondwana. 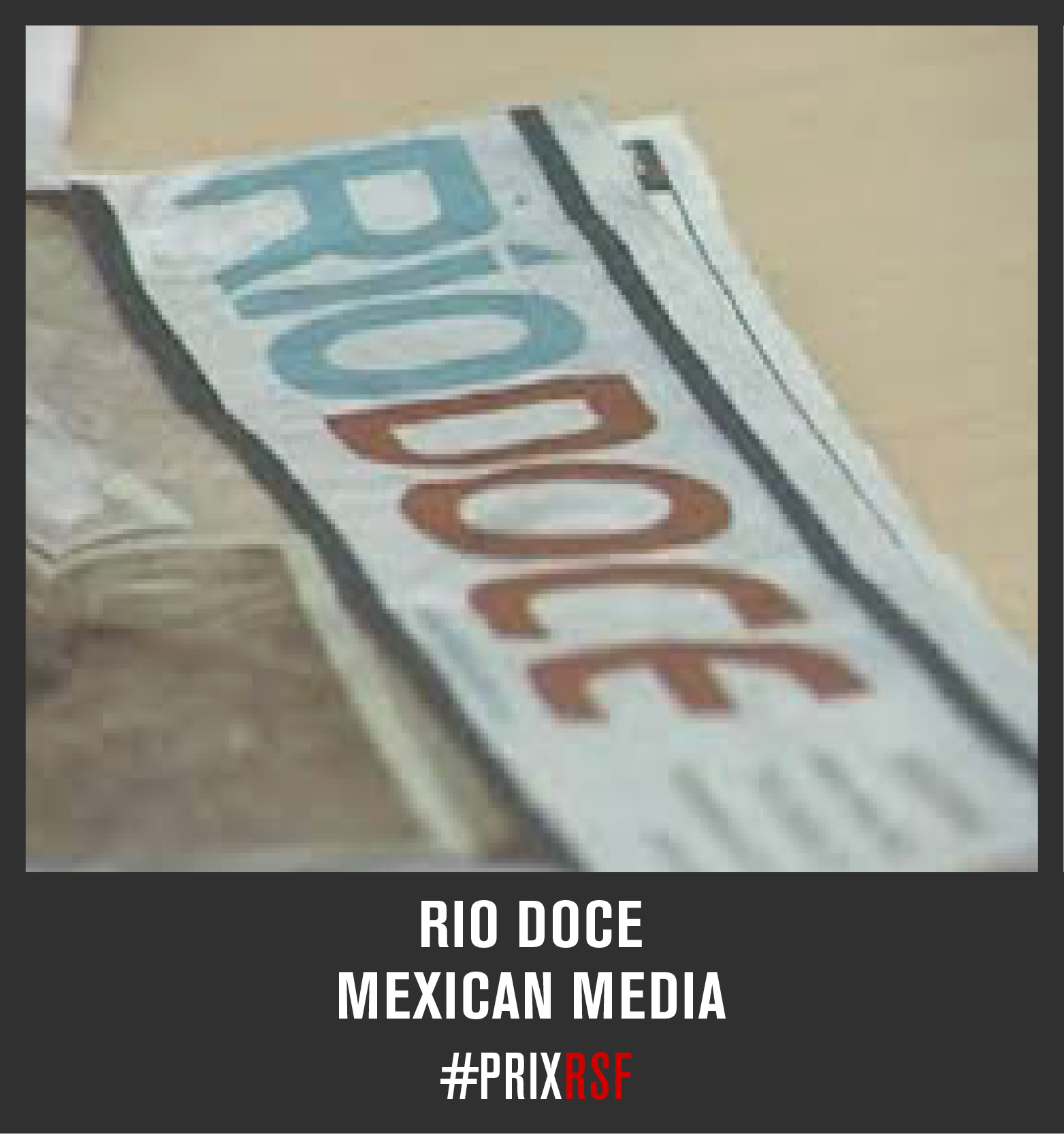 Founded in 2003, the weekly magazine Río Doce is based in Sinaloa, a Mexican state that is disproportionately affected by organized crime. Produced in print and online versions, it specializes in investigative and in-depth reporting. Because of its independence and its critical views, many of its journalists have been threatened and it has been publicly denigrated by the Sinaloa authorities. On May 15 of this year, masked gunmen killed one of the magazine’s founders, Javier Valdez Cárdenas, who was also an AFP reporter. His death sent a shockwave through Mexico and prompted many demonstrations of solidarity with Río Doce’s journalists. 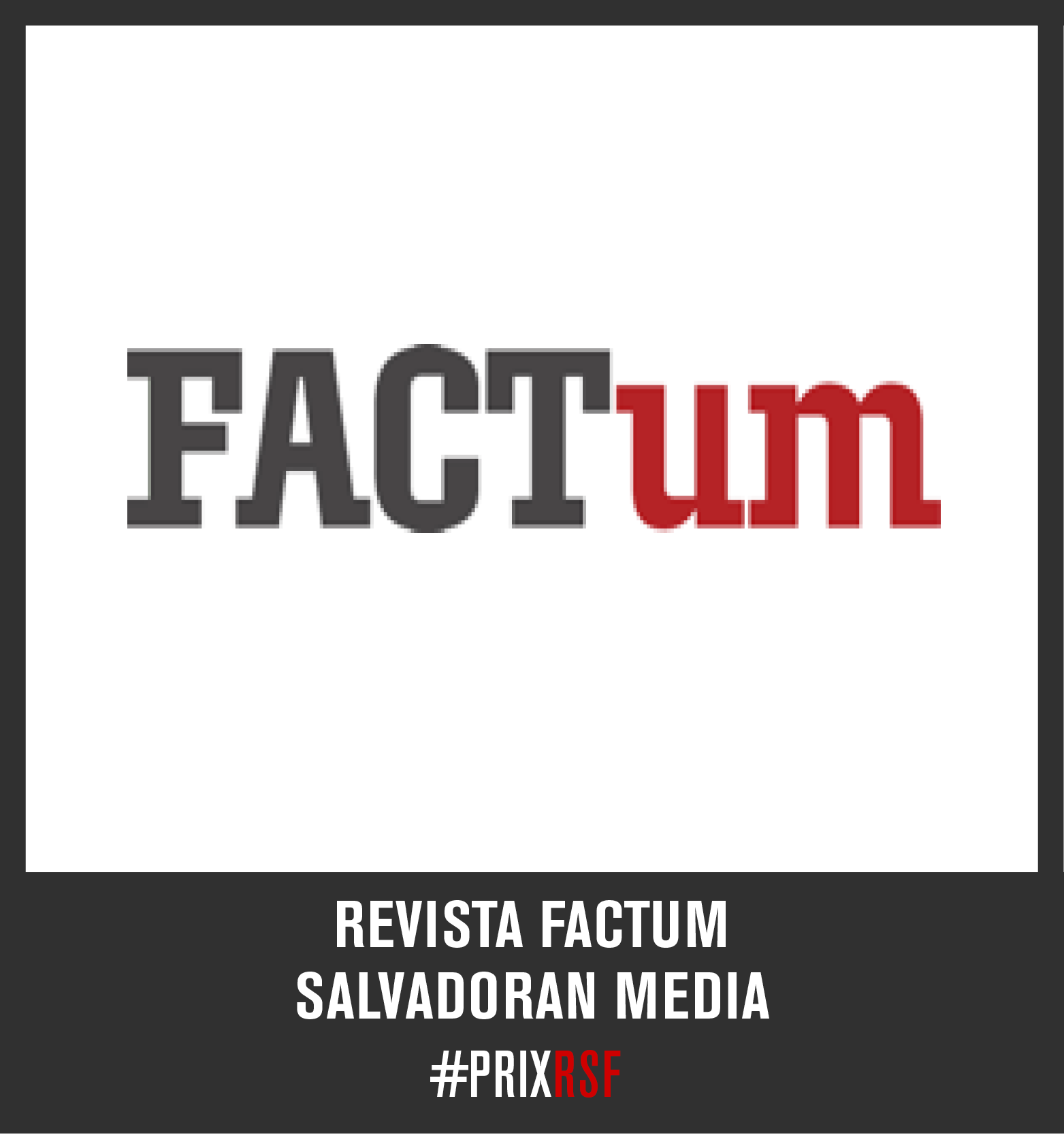 Factum is a Salvadoran online magazine that was launched in 2014 by two journalists, one specialized in covering culture and entertainment, the other in covering corruption and drug-trafficking. In August of this year, it published an investigative report entitled “Inside the police death squad,” claiming that a group within the police was summarily executing members of “pandillas” (criminal gangs). The judicial authorities launched an investigation in response to the magazine’s allegations. But the report also triggered smear campaigns, harassment, intimidation, and death threats against the journalists at Factum and El Faro, a publication that picked up Factum’s story. Some of the threats came from groups linked to the police. 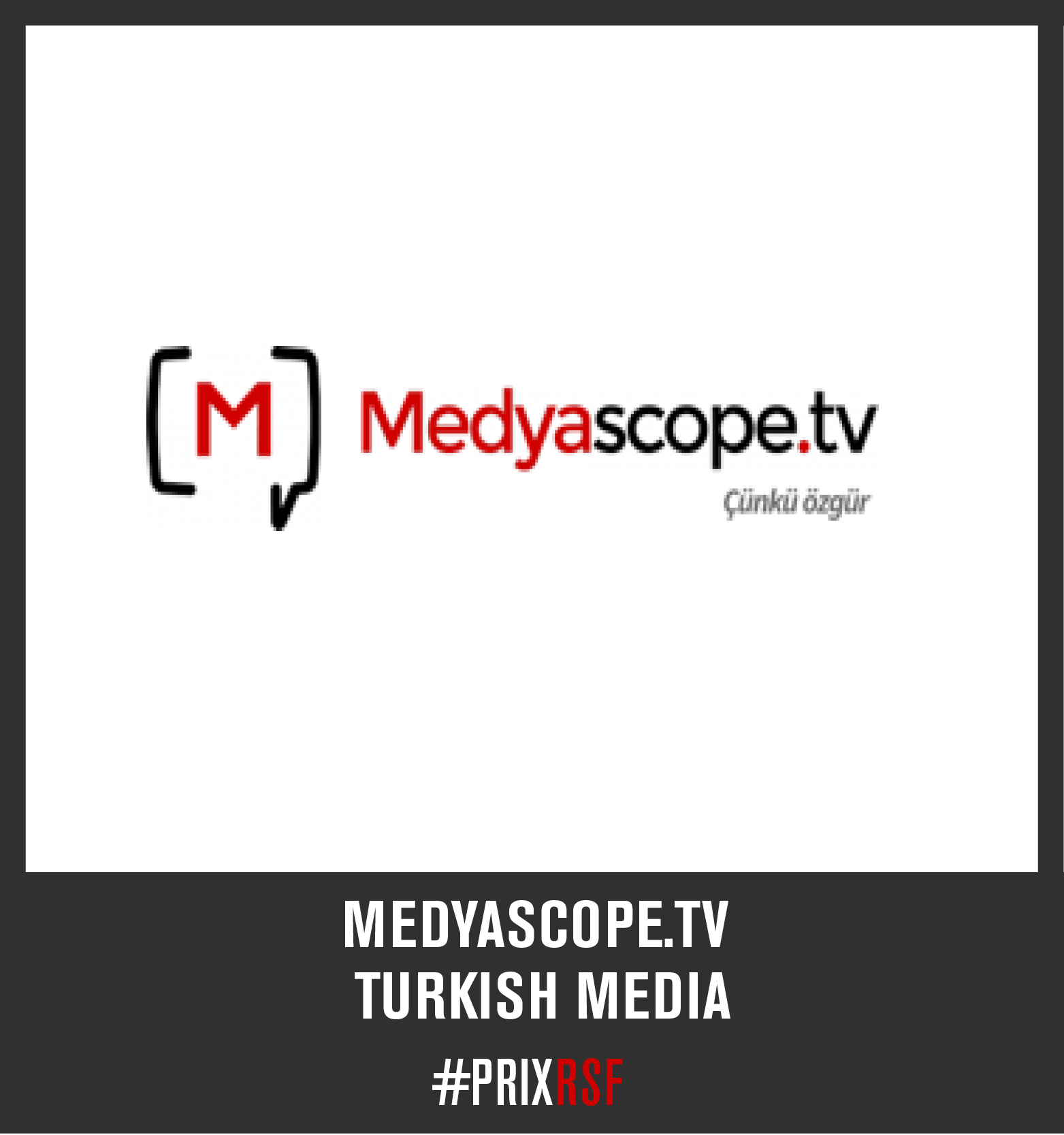 The fight for independently reported news and information is the driving force behind Medyascope, an online platform launched in September 2015 by leading journalist Ruşen Çakır, whose motto is “Because it’s free.” Medyascope aims to combine new technology with the best reporting standards to reopen a public debate that is largely suppressed in Turkey, which is ranked 155th out of 180 countries in RSF’s 2017 World Press Freedom Index. It uses videos that are broadcast online and made available as podcasts to give a voice to journalists marginalized by the government’s crackdown, and to citizen-journalists. Its programs quickly became structured, and include sections on a wide range of subjects such as politics, society, culture, and sport. Some of its programs are available in Kurdish, German, French and English. They include a weekly English-language podcast called “This Week in Turkey.”