Skip to main content
RSF_en
Reporters Without Borders (RSF) is concerned about an increase in threats and violence against media personnel in Afghanistan, where six media workers have been killed and ten journalists have been injured in the past few weeks, and others have been threatened by the Taliban in several provinces.

Aziz Novin, a Tolo News computer technician, and Mohammad Nazir, a BBC driver, were among those killed by a massive truck bomb in Kabul’s diplomatic district, Wazir Akbar Khan, on 31 May while ten journalists, including four with the BBC and three with TV1, were among the wounded.

The headquarters of TV1, the Killid media group and Shemshad, a privately-owned TV channel, were also badly damaged by the blast. Two journalists (one with the state-owned national radio and TV broadcaster and one with privately-owned Aryana TV) were among the many wounded when police opened fire the next day on a street demonstration about security that was heading to the presidential palace. At least five people were also killed.

Four employees of the national radio and TV broadcaster’s local branch in Jalalabad – Abdollatif Amiri, Mohammad Amir Khan Shinwari, Naghdi Ghani and Zeinolah Khan Mollakhil – were killed when it was attacked by five suicide bombers on 17 May. The attack was claimed by Islamic State.

Jalalabad is the capital of Nangarhar, an eastern province that is a particularly dangerous for journalists and media outlets. But more and more of the country’s regions are turning into conflict zones and into news and information “black holes” -– places where the freedom to inform no longer exists.

RSF is disturbed to see that the threats are not limited to conflict zones. Journalists in other provinces have received threatening messages and phone calls in recent months.

Speaking on condition of anonymity, a journalist with one of the country’s biggest dailies said he received message signed by the Taliban referring to a deadly attack on Tolo TV in January 2016 and threatening him with the same fate as “the other spies for the Americans who don’t respect journalistic neutrality.”

“Journalistic neutrality” is the term that these press freedom predators use for the Taliban official line which, when adopted, creates the information “black holes.”

The growing violence is fuelling tension between journalists and local authorities. Many governors and local official do not respect journalistic independence. Two journalists, Parviz Romel of Reuters and Nurolah Shirzad of AFP, were roughed up by the police in Jalalabad on 22 May. The governor promised to investigate but so far with no result.

Abdolhai Nemati, the governor of the northern province of Baghlan, shut a journalist and two other employees of privately-owned Arezo TV into his office on 25 May to make them delete a sequence of an interview in which he talked about the situation in the province.

“At a time when threats and physical and verbal attacks against journalists are on the rise in Afghanistan, we urge the government to implement measures designed to guarantee journalists’ safety,” said Reza Moini, the head of RSF’s Iran/Afghanistan desk.

“These attacks and threats constitute direct attacks on the right to information and lead to censorship and self-censorship. In this war imposed by democracy’s enemies against the Afghan people’s right to information, RSF has chosen to stand alongside the journalists and to do everything possible to defend the freedom to inform. At the same time, we call on the media and journalists to cover the current grave political and security crisis in Afghanistan with professionalism.”

RSF also reminds the international community that, in order to guarantee journalists’ safety, any negotiation with the Taliban should be conditioned on a prior explicit Taliban pledge to respect fundamental international treaties governing humanitarian law, starting with the Geneva Conventions.

Improving the safety of journalists was the aim of the meetings that RSF organized with government officials and journalists’ associations during a visit to Afghanistan from 6 to 18 November 2016.

Journalists from ten independent national and local media outlets in several provinces (Kabul, Kapisa, Kandahar, Bamian, Nangarhar, Baghlan, Kunduz and Farah) participated in a seminar on safety that RSF organized in the capital.

Participants were given copies of the new Persian-language and Pashtun-language version of the Safety Guide for Journalists, which RSF produced in partnership with UNESCO. The seminar’s aim was to train these journalists in working in dangerous areas.

RSF and its local partner, the Afghanistan Federation of Journalists, organized a conference on “Security for Journalists and Afghanistan’s ranking in the World Press Freedom Index” for government officials and journalists’ associations* on 14 November.

The opening address was delivered by Vice-President Sarwar Danish, the chair of the Committee for the Safety of Journalists, who insisted that the government was committed to protecting journalists. In the two panel discussions, participants talked about the many persistent problems and proposed solutions.

At a meeting with Vice-President Danish on 16 November, RSF said that, despite the continuing violence against journalists, media freedom had progressed in Afghanistan but that, to improve the country’s position in the Press Freedom Index, the issue of journalist’ safety had to be resolved.

Danish thanked RSF for what it has done in Afghanistan and reiterated his commitment to support RSF’s international initiatives including the proposed creation of the position of special representative of the UN secretary-general for the safety of journalists.

Vice-President Danish supported this initiative in an address to the UN General Assembly in November 2016. Nader Naderi, a senior presidential adviser and Afghanistan’s ambassador for freedom of expression, also voiced full support for RSF’s initiatives during a meeting with RSF.

On 13 November, RSF met deputy information and culture minister Mogeghan Mostafavi to discuss the safety of journalists, the efforts to improve Afghanistan’s position in the Press Freedom Index, and respect by certain branches of the state for the law on media and information.

Online freedom of information and a proposed new cyber-crime law were discussed with deputy information and communications technology minister Muhammad Aimal Marjan on 15 November. He assured RSF that the government was committed to guaranteeing unrestricted Internet access for all citizens and said the new law was needed to combat Taliban manipulation of social networks. RSF was invited to submit recommendations for the new law. 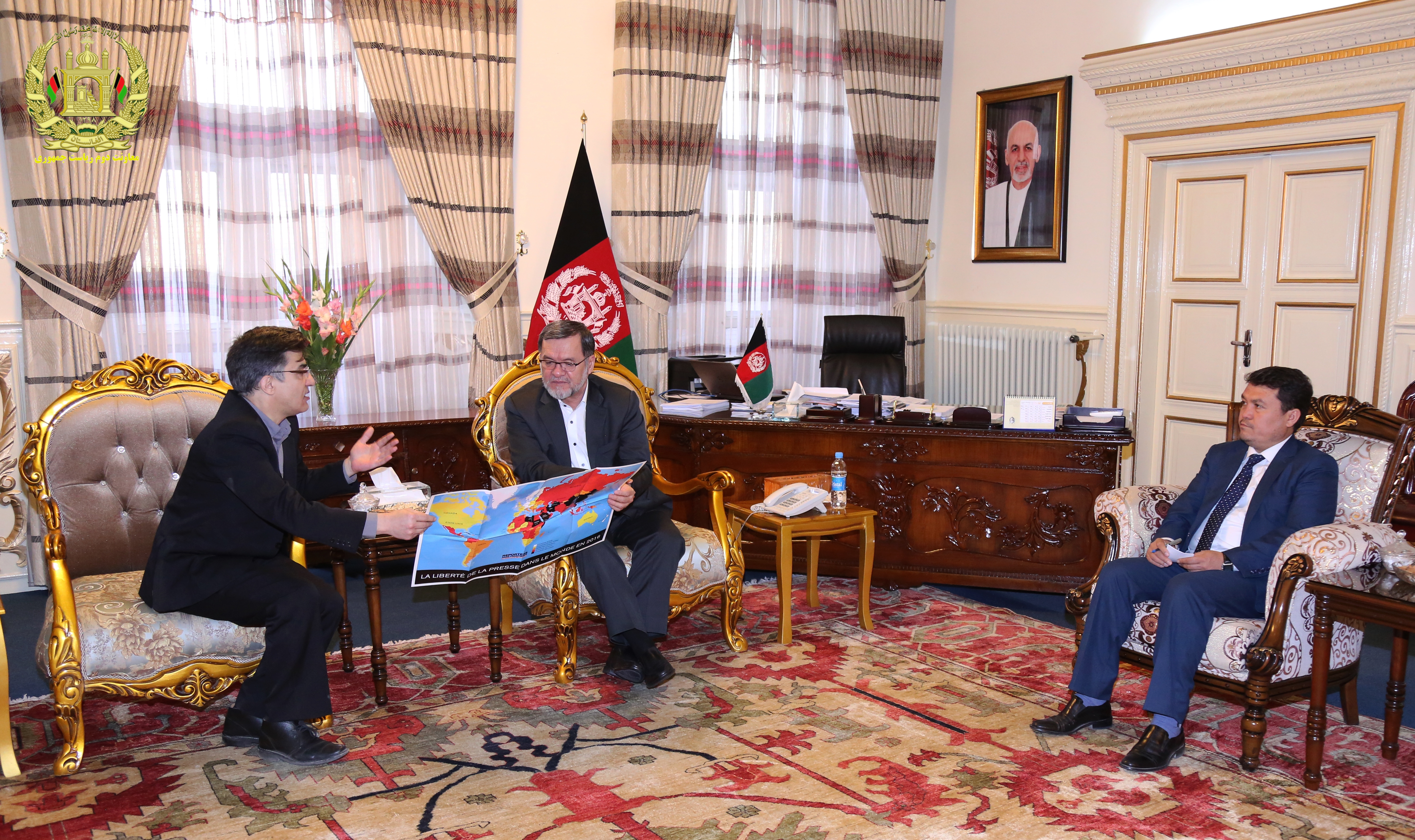 During a follow-up visit to Afghanistan in March, RSF inaugurated a Centre for the Protection ofAfghan Women Journalists (CPAWJ) at a ceremony in Kabul on 7 March in the presence of government officials and civil society representatives.

Afghanistan is ranked 120th out of 180 countries in RSF’s 2017 World Press Freedom Index.