Skip to main content
RSF_en
Reporters Without Borders (RSF) calls on the Moroccan authorities to respect the rights of the detainees currently on trial in Casablanca for their role in the “Hirak” protest movement in the Rif region. They include a journalist and five citizen-journalists and media workers.

RSF urges the authorities to adhere to international standards governing the treatment of detainees. The trial was postponed for the fifth time at a hearing on 21 November – this time at the request of the defence, which asked for a delay in order to prepare its arguments.

They are all currently held at Okacha prison, which is more than 500 km from their homes in and around the city of El-Hoceïma, in the northern Rif region, where they were arrested.

According to the information obtained by RSF, their treatment in prison does not comply with the international principles established by the Office of the UN High Commissioner for Human Rights and the Principles and Guidelines on the Right to a Fair Trial and Legal Assistance in Africa.

“When we met Hamid El Mahdaoui’s family and some of the lawyers for the Hirak detainees last week in Morocco, they described to us the deplorable conditions and constant humiliation to which these journalists are being subjected in detention,” said Yasmine Kacha, the head of RSF’s North Africa bureau.

“We urge the Moroccan authorities to respect standards on the treatment of detainees both in prison and during hearings. We have shared our concerns with the protection department at the National Council for Human Rights (CNDH), which took note of them.” 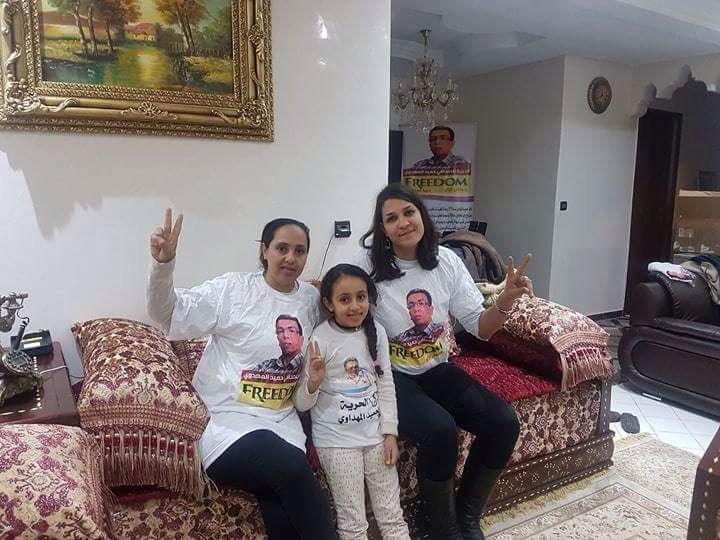 Yasmine Kacha from RSF with Bouchra el Mahdaoui on November 15 in Rabat.

El Mahdaoui staged a two-week hunger strike in September in protest against the conditions in which he is being held and the fact that he has been in solitary confinement for several months. He is allowed into an exercise yard for only two 30-minute periods a day during which he cannot talk to anyone.

El Ablak began his third hunger strike on 9 November against the “inhuman” and “shameful” treatment he is receiving. A few weeks ago, the detainees stopped being allowed to receive food packages from their families. El Ablak ended his hunger strike on the eve of the 21 November hearing.

When they appear in court, the defendants are confined to an area behind tinted glass and are monitored by cameras. During the hearing on 21 November, police manhandled El Mahdaoui’s wife, Bouchra, when she tried to approach her husband.

“Mistreatment by prison guards is a distinguishing feature of the detention of these journalists,” said Khadija Riyadi, a winner of the 2013 United Nations Human Rights Prize and a co-founder of the committee set up to support El Mahdaoui and the other journalists held in connection with the Hirak protests.

“The food they are getting since their families were prevented from bringing food baskets is of poor quality,” she said. “A few days ago, the detainees were subjected to a humiliating search. Medical care is lacking. We regret not being allowed access to the detainees. The support committee has requested access but has not received an answer.”

El Mahdaoui was already sentenced in a separate case in September 2017 to one year in prison and a fine of 20,000 dirhams (2,000 euros). He is also facing a possible five-year jail sentence on a charge of endangering state security. The citizen-journalists and media workers in the Hirak mass trial are being prosecuted under the criminal code and the law on public gatherings.

RSF has repeatedly called for their release. If the authorities insist on bringing any prosecution against them, it should be on the basis of the press and publishing law, and the defendants should not be detained while being tried or awaiting trial.

The UN Standard Minimum Rules for the Treatment of Prisoners permit solitary confinement for more than 15 consecutive days only in exceptional cases and only as a last resort after an independent review. Also, detainees must normally be allowed to communicate with their families at regular intervals and must receive medical care.

Under the Principles and Guidelines on the Right to a Fair Trial and Legal Assistance in Africa, which the African Commission on Human and Peoples’ Rights adopted in 1999, every accused person has the right to an effective defence, and states must ensure that detainees are treated in a humane manner and with respect for the inherent dignity of the human person.