In countries where it is endemic, corruption is often one of the biggest taboos for journalists and the most dangerous story to cover. Nonetheless, in both rich and poor countries, journalists are usually on the front line of anti-corruption efforts, paying a high price for investigative reporting that helps to prevent corruption from undermining democracy and fuelling human rights violations.

“Wars, political and economic crises and authoritarian excesses are the main factors that favour corruption,” RSF editor-in-chief Virginie Dangles said. “In countries such as Turkey, Eritrea, Somalia, Mexico, Russia, Malaysia and Iran, this curse often choses its victims in the ranks of journalists and citizen journalists. We call for more protection for media and journalists who, by combatting corruption, defend the very foundations of democracy and the rule of law.”

Marcos Hernández Bautista, a 38-year-old Mexican journalist working for the Noticias Voz e Imágen newspaper, was gunned down near San Andrés Huaxpaltepec in the state of Oaxaca on 21 January after writing articles that had touched on the “interests of bosses in the region.”

Not all investigative journalists risk their lives, but many of them are exposed to judicial reprisals designed to gag them. Hundreds of Turkish media representatives continued to be prosecuted in 2016 for exposing or referring to alleged corruption by those close to former Prime Minister and now President Erdogan.

Alexander Sokolov, a reporter for the RBC news agency who specialized in investigating large-scale corruption, is now a symbol of the persecution of those who dare to shed light on such abuses in Russia.

After being held for 15 months, he was finally brought before a Moscow court on 9 November on a charge of “organizing a terrorist group” (which is punishable by up to eight years in jail) because he carried out a detailed investigation into the embezzlement of 93 billion roubles (1.27 billion euros) in public funds in the construction of the Vostochny Cosmodrome in eastern Siberia.

The Russian authorities often target overly curious journalists such as Sergei Reznik, who repeatedly exposed corruption by the local elite in the southwestern city of Rostov-on-Don until his arrest in 2014.

Defamation suits rain on journalists who draw attention to conflicts of interest and collusion between the state and private sector. David Natera Febres, the editor of the Correo del Caroni newspaper in Bolívar state, in southeastern Venezuela, was sentenced to four years in prison on a criminal defamation charge on 11 March 2016 for his coverage in 2013 of a case of alleged corruption and extortion involving army officers and the state-owned Ferrominera Orinoco company.

In Angola, journalist Rafael Marques de Morais was given a suspended six-month jail sentence on 28 May 2015 on a criminal libel charge for exposing grave human rights violations and corruption in the diamond mining industry in the northeastern Lundas region.

Just days before the Global Anti-Corruption Conference held in Panama City from 1 to 4 December, Dutch journalist Okke Ornstein was arrested at the city’s Tocumen international airport to begin serving the jail sentence he had been given in 2012 in connection with some of his frequent blog posts about corruption in Panama.

Ornstein was sentenced to a total of 20 months in prison (eight months for insult and 12 months for libel) in response to a complaint by Canadian businessman Monte Friesner over a series of posts on one of Ornstein’s blogs, Bananama Republic, about allegedly illegal practices (fraud and money laundering) by Pronto Cash, a company created by Friesner in Panama.

Zulkiflee Anwar Haque, a Malaysian cartoonist better known as Zunar, is facing up to 43 years in prison on nine counts under Malaysia’s Sedition Act for posting nine cartoons on Twitter about alleged corruption within Prime Minister Najib Razak’s government and the high-profile judicial proceedings against opposition leader Anwar Ibrahim.

Like Zunar, Singaporean blogger Roy Ngerng was subjected to judicial persecution by his country’s prime minister, Lee Hsien Loong, over a May 2014 blog post accusing the government of mismanaging Singapore’s Central Provident Fund (CPF) for retirees. In many countries in the bottom third of RSF’s World Press Freedom Index, the lack of judicial independence and collusion between government officials, businessmen and judges pose an additional obstacle to investigative reporting.

As Kazakh journalist Lukpan Akhmedyarov put it in an interview in October 2012, when he received the Peter Mackler Award for Courageous and Ethical Journalism, “The judicial system has become a way of hounding independent news media.”

Whistleblowers who shed light on murky and sometimes illegal practices by leading private-sector corporations are also exposed to judicial reprisals, sometimes more so than journalists.

Such is the case with Antoine Deltour and Raphaël Halet, two former employees of international accounting firm PricewaterhouseCoopers (PwC), who received suspended sentences of 12 and 9 months in prison respectively from a Luxembourg court on 29 June for leaking documents revealing how Luxembourg helps multinationals to avoid tax. The court acquitted their co-defendant, journalist Edouard Perrin. All three have appealed.

“The latest Corruption Perceptions Index published by Transparency International and RSF’s 2016 World Press Freedom Index show a degree of correlation between countries with little freedom of information and those with the most corruption,” Dangles added.

“It is not by chance that countries such as Denmark, Finland and Sweden top both indexes while countries such as Eritrea, North Korea and Sudan get the worst rankings from both Transparency International and RSF. Combatting corruption and protecting journalists should be a priority for these countries.” 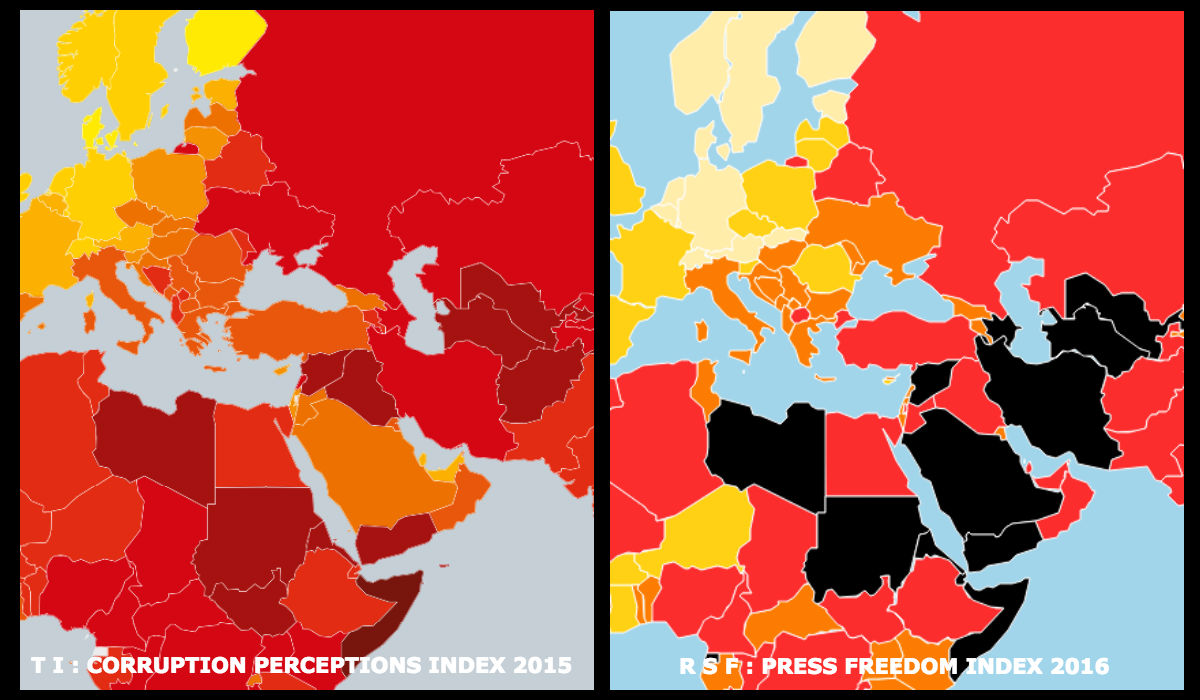 In Iran, the persecution of journalists is often aimed at concealing governmental powerlessness or equivocation in the fight against corruption. Since the start of the year, at least four journalists have been jailed and four media outlets have been closed and prosecuted for revealing the involvement of senior officials in various cases of bribery and lavish salaries.

Sadra Mohaqeq, who is responsible for coverage of social issues at the daily newspaper Shargh, and Yashar Soltani, the editor of the Memarinews.com online newspaper, were arrested in September in connection with their coverage of Tehran city hall corruption and were then released pending trial. At the same time, access to the Puyesh and 9sobh news websites and the sites of the Mojnews and Bornanews news agencies was temporarily blocked because they had reported corruption allegations or had criticized the inconsistencies of the judicial system’s attempts to combat corruption.

With an estimated one thousand billion dollars spent on bribes every year, corruption is regarded by the United Nations* as one of the leading obstacles to political, economic and social development. All of the world’s countries are affected by corruption.

* The United Nations General Assembly passed Resolution 58/4 on 31 October 2003, adopting the Convention against Corruption and designating 9 December as International Anti-Corruption Day in order to raise awareness of corruption and the Convention’s role in combating and preventing it.