Reporters Without Borders (RSF) and partner organizations wrote today to Milo Dukanovic, the prime minister of Montenegro, voicing concern about Jovo Martinovic, an investigative reporter who has been detained for nearly 11 months.

A specialist in covering organized crime in the western Balkans, Martinovic is being held in a police investigation into drug trafficking but has not been formally charged by the Montenegrin public prosecutor’s office.

Martinovic works for many international media outlets including the Economist, the Financial Times, and the CAPA news agency.

The joint letter calls on the authorities to take account of the fact that Martinovic’s investigative reporting offers a logical explanation for why he was in contact with drug traffickers.

RSF and the other organizations also urge the authorities to release him at once pending trial. Martinovic has been insisting on his innocence ever since his arrest in October 2015.

Montenegro is ranked 106th out of 180 countries in RSF’s 2016 World Press Freedom Index. 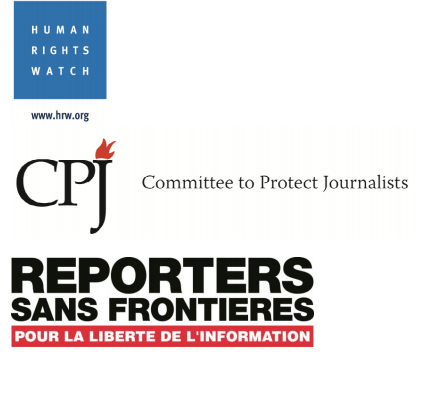 Human Rights Watch, the Committee to Project Journalists and Reporters Without Borders are jointly writing to protest the prolonged pre-trial detention and prosecution of Montenegrin freelance journalist Jovo Martinović, which we believe violate his rights to liberty and due process, and disregard Montenegro’s obligations to respect press freedom.

We urge the relevant authorities to release Martinović immediately and to provide his attorney with all evidence against him. As explained below, we are seriously concerned that the investigation and charges against Martinović are motivated by his work as a journalist, rather than criminal behavior on his part, and as such should be dropped. If the prosecutor persists with the charges to trial, it is essential that the trial complies with international standards, including rights enshrined in the European Convention on Human Rights.

Martinović was detained on October 22, 2015, on suspicion of participating in a drug trafficking ring, pending the completion of an investigation against him and 17 other suspects. On April 8, 2016, after nearly half a year in detention, the Special Prosecutors Office filed an indictment against Martinović and 13 others. As of today, no trial date had been set.

Two special requests by Martinović’s lawyer to have his client released on bail pending trial have been rejected, most recently on September 9, though the authorities provided no detailed explanation for the rejection.

The European Court of Human Rights, whose rulings are binding on Montenegro, has repeatedly clarified that judicial authorities should make decisions on pretrial detention based on evidence of specific facts and personal circumstances about the accused, and they cannot rely on “general and abstract” reasons. In Martinović’s case, we believe the authorities have not offered specific facts or circumstances to justify his continued detention, and he should therefore be released pending and during trial.

With respect to the charges, the prosecutor alleges that Martinović committed criminal acts by facilitating a meeting between the buyer and seller of narcotics and installing a communication application – Viber (a popular and commonly used application) – on the phone of the alleged gang leader, Duško Martinović (no relation to the journalist). Jovo Martinović denies the charges and, with his lawyer, has explained to the prosecutor how his contact with Duško Martinović and the other alleged criminals was solely in the context of his work as a journalist.

Over the past 15 years, Martinović has done extensive investigative reporting about crimes and war crimes, developing sources among criminal organizations. He’s worked with a wide array of international media and contributed reporting and research to The Economist, Newsday, Global Post, The Financial Times, and VICE media group, among others.

In 2014, Martinović worked with VICE on a documentary series about a gang of gem thieves called the Pink Panthers, of which Duško Martinović is a member. At the time of his arrest, he was conducting research for the French production company CAPA Presse for a documentary film (La route de la Kalashnikov) about the smuggling of weapons from the Balkans to Western Europe, which subsequently aired on the French television channel Canal+.

International journalists who have worked with Martinović attest to his integrity and professionalism. They point in particular to his skills at establishing direct sources in criminal organizations.

On April 19, 2016, the Committee to Protect Journalists sent you a letter expressing deep concern about Martinović’s excessively long detention without charge prior to April 8, and the non-disclosure of evidence against him to his attorney. In this letter, international journalists vouched for Martinović’s character. On April 22, 2016, Reporters Without Borders issued a statement about Martinović that condemned his prolonged detention.

Today, after 11 months in detention, five months after the indictment, the only evidence that the prosecutor has provided to Martinović are statements from two of his co-accused, who are apparently cooperating with the authorities in return for reduced sentences. In August, the daily Vijesti ran a series of articles alleging that Special Prosecutor Mira Samardžić has applied pressure on Duško Martinović to implicate Jovo Martinović in crimes he had not committed.

Mr. Prime Minister, we are concerned that Jovo Martinović’s lengthy detention and prosecution is motivated by his work as an investigative journalist rather than in response to an alleged criminal act. This would show a lack of respect for Montenegro’s obligations to respect and safeguard media freedom. In addition, the Copenhagen criteria applicable to states negotiating European Union accession include respect for freedom of the press.

If the prosecution has amassed probative evidence against Martinović, we call on the relevant authorities to give full access to that evidence to Martinović and his legal representatives so they can prepare his legal defense. We also call for Martinović’s release pending the outcome of his trial.

Thank you for your attention to this important matter and we look forward to your reply.

Head of the Montenegrin Mission to NATO Ambassador Dragana Radulović

of the European Commission Federica Mogherini

Director General for Enlargement at the European Commission Christian Danielsson

Head of Delegation of the European Union to Montenegro Mitja Drobnič

Head of Mission of Montenegro to the European Union Ivan D. Leković

OSCE Representative on Freedom of the Media Dunja Mijatović

Ambassador of Montenegro in the United States Srđan Darmanović

Ambassador of the United States of America to Montenegro Margaret Uyehara