On the eve of a two-day “dead city” general strike that the opposition organized in the Democratic Republic of Congo on 8 and 9 August, the Congolese Post and Telecommunications Regulation Authority (ARPTC) asked telephone service operators, including the French company Orange, to slow down access to social networks.

Reporters Without Borders (RSF) condemns this latest violation of freedom of information by the DRC’s authoritarian government and calls on telephone operators to resist such demands in the future.

Slowing down access to social networks in the DRCis one of the government’s favourite methods for silencing the opposition and preventing information circulating about unwanted protests.

In a letter to the CEO of Orange-DRC on 7 August, the ARPTC’s president blatantly asked Orange to “reduce message transmission capacity to the strict minimum” because of “improper use” of social networks. By this he meant opposition use of social networks for the purposes of communication. 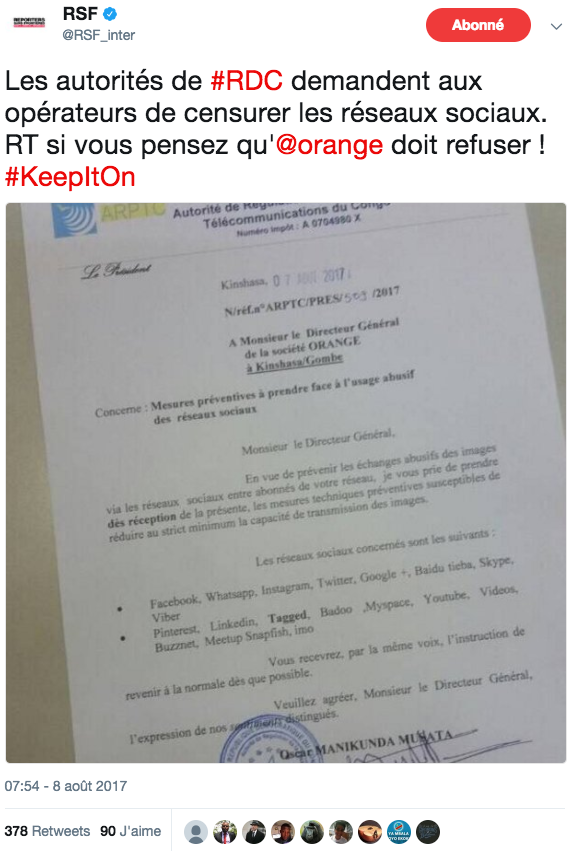 And Orange complied with the request, as many sources have confirmed to RSF. An Orange employee in the DRC told RSF: “When the government tells us ‘we’re hitting hard,’ we do it. We have no choice.”

“The authorities don’t want images of abuses circulating online,” said Cléa Kahn-Sriber, the head of RSF’s Africa desk. “They think: if no one see it, it didn’t happen. The problem with acting like this is that they are violating the freedom to inform. We are extremely concerned about the many cases of censorship.”

Yves Nissim, the person responsible for human rights-related issues at Orange, said: “We try to resist by only responding to requests when they are official and in writing.”

Orange is having to deal with a growing number of censorship requests in African countries, according to its transparency report. In many countries these requests have for a long time been made verbally and have sometimes been accompanied by threats.

This situation is absolutely unacceptable at a time when most members of the public use the Internet to get their information,” said Elodie Vialle, the head of RSF’s Journalism and Technology Desk. “For this reason, we ask operators such as Orange to respect their obligations and to assume their responsibility not transgress against democracy. By resisting. Really resisting.” 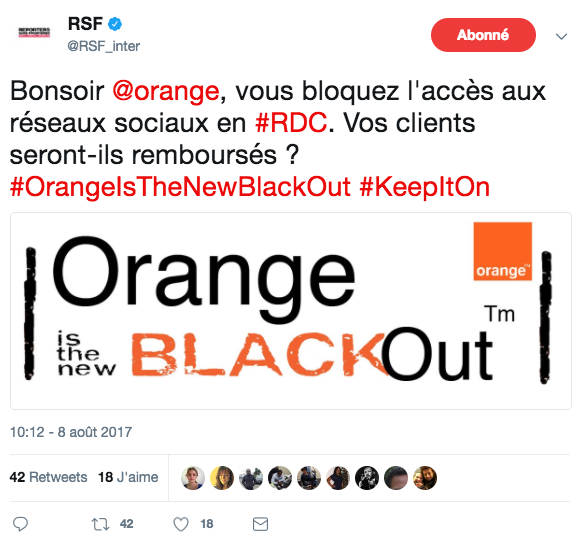 Telephone operators comply with orders from governments because it is in their economic interest but they are nonetheless not exempt from all responsibility.

In a conflict between the need to satisfy the clients who pay them and the desire not to lose their operating licence by upsetting the government, companies such as Orange end up accommodating authoritarian regimes and thereby become the instruments of online repression.

“Digital Detox” to keep the opposition in check

The Congolese government asks operators to reduce access speeds to prevent the circulation of unfavourable information and above all to prevent people from uploading photos and video to social networks. In his letter, the ARPTC’s president said he wanted to limit the circulation of images on Facebook, WhatsApp, Twitter, Google+ and even the dating site Badoo.

When asked by RSF, New Technology minister Emery Okundji said the government was concerned about “images that distort the truth and incite violation” and “disturb public order.” This former opposition politician turned ally of the regime’s authoritarian methods also denied that this constituted real censorship inasmuch as access is just slowed down “temporarily.”

“There is no disturbance of public order, just state-organized deception,” said Jonas Tshiombela, the coordinator of New Congolese Civil Society, a human rights group. “After all, the Congolese are paying for this service.”

The Internet cuts and slow-downs are also having a not-insignificant impact on the country’s economy, inasmuch as they force entire sectors to suspend operations.

What the government wants is for no one to see demonstrations of popular discontent and support for the opposition’s demand for elections.

Eighteen journalists were briefly detained while covering demonstrations in Kinshasa, Goma and Bukavu on 31 July to demand the publication of an election calendar. Two journalists, Amadi Ngilima and Cosmos Bafwandongo, were arrested by the National Intelligence Agency (ANR) in Uvira, in Sud-Kivu province, on 8 August “for wanting to film the dead-city protest.”

Under the current constitution, Joseph Kabila, the DRC’s president since 2001, should have stood down at the end of his second term on 19 December 2016. Under an agreement reached with the opposition, elections are supposed to be held by the end of 2017 but the authorities have yet to publish an electoral calendar and keep on finding new reasons to postpone them.

The situation has been worsening steadily for the past decade in the DRC, which is ranked 154th out of 180 countries in RSF’s 2017 World Press Freedom Index.

RSF points out that one of the ways to bypass this kind of censorship may be to use a VPN or the Tor Browser.