Skip to main content
RSF_en
Below are the most notable incidents regarding threats to press freedom in the US during the week of November 13 – 19:

During a House Judiciary Committee hearing on Tuesday, November 14, Attorney General Jeff Sessions failed to promise protections for journalists safeguarding their sources, stating “We have not had a conflict in my term in office yet with the press but there are some things the press seems to think they have an absolute right to.” When asked about combatting top-level leakers in the Trump administration, Sessions claimed that the Justice Department currently has twenty-seven ongoing leak investigations, and that he would continue to crack down on those leaking information. The number of ongoing investigations represents an increase from the prior administration. This is the second time the Attorney General has failed to promise protection for journalists in this context. In October, when he was first asked about the issue during a Senate Judiciary Committee hearing, Sessions argued that he would utilize the Constitution to prioritize national security over journalists. In August, Sessions stated that the administration would be “reviewing policies affecting media subpoenas.”

Trump attacks CNN and NYT following his return from Asia

Upon his return to the United States from Asia on November 15, President Trump once again attacked CNN on Twitter for their coverage, calling them “fake.”

During Trump’s trip to Asia, he was widely criticized for the White House press corps’ lack of access. The lapse in transparency during the trip made it difficult for journalists to report on the interactions the president had with foreign leaders.

On Wednesday, November 15, President Trump also criticized the New York Times, claiming that their recent articles, which questioned his budding relationships with the leaders of China and the Philippines, were politically biased. 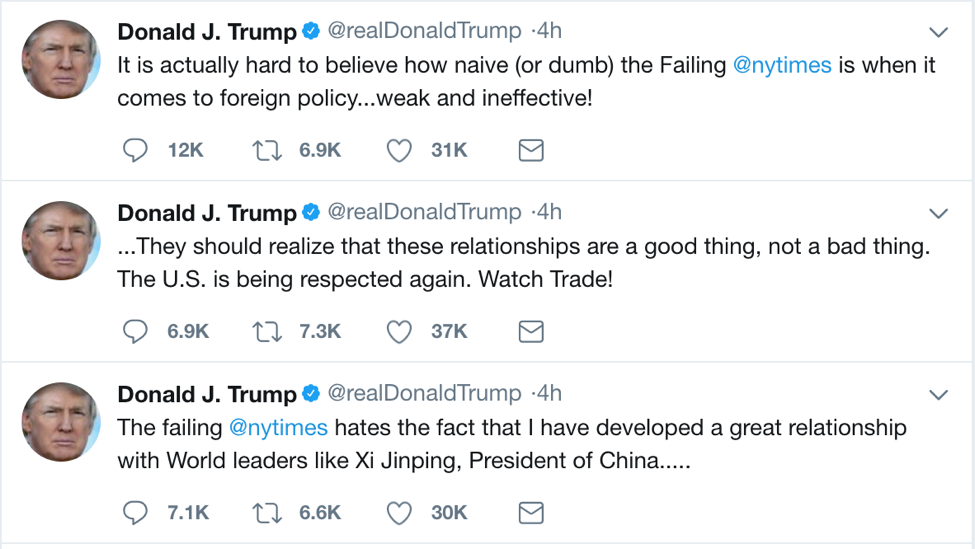 President Xi Jinping of China, Secretary Nguyen Phu Trong of Vietnam, and President Rodrigo Duterte of the Philippines have all been accused of gross human rights violations, and systematically undermine the freedom of press and information by putting journalists and citizen-journalists behind bars or allowing impunity for journalists' murders.

On Friday, November 17, a series of documents were released that detailed how US Representative Greg Gianforte (R-MT) misled investigators about his assault on Guardian reporter Ben Jacobs in May. In the documents, Gianforte claims Jacobs attacked him first by grabbing his wrist and pulling them both to the floor. This narrative contradicts multiple eyewitness reports, which stated that Gianforte attacked Jacobs after becoming enraged when Jacobs persistently asked him questions about the Republican healthcare bill. Gianforte later pled guilty to a misdemeanor assault charge. Physical attacks against journalists in the United States have noticeably increased under President Trump, who often tweets violent images attacking the press while blaming them for spreading “fake news.” According to the US Press Freedom tracker, a collaborative project of which RSF is on the steering committee, there have been at least thirty-one physical attacks on journalists in 2017. Two of those reporters have been assaulted by politicians.

On Thursday, November 17, the Federal Communications Commission (FCC) ruled 3-2 to repeal a 42-year ban on cross-ownership of a newspaper and TV station in the same major market, which would make way for large organizations to control increasing shares of media outlets. The rule change was praised by media companies like Tegna Inc., among others, who stated that the ban had limited their expansion plans. Critics of the repeal worry however that the increasing consolidation of media will lead to “cookie-cutter news,” or the syndication of news by large corporations. This could eliminate independent journalism altogether. One such example involves Sinclair Broadcasting Group, a conservative broadcasting company which is currently attempting to purchase Tribune Media, one of the largest television broadcasting companies in the US. This $3.9 billion deal would provide Sinclair with a whopping 233 new television stations, effectively expanding the platform for Sinclair’s chief political analyst, Boris Epshteyn, a former Trump aide whom Sinclair hired in April.