Skip to main content
Credit: NICHOLAS KAMM / AFP
RSF_en
Below are the most notable incidents regarding threats to press freedom in the US during the week of March 26-April 1:

The Department of Justice (DOJ) indicted Terry Albury, a former Federal Bureau of Investigation (FBI) agent, on March 27 for allegedly leaking secret documents to a national media organization. Though the media outlet was not specified, The Intercept released a set of classified FBI guidelines for assessing confidential informants in January 2017 that correlated with the dates of Albury’s alleged leak. He has been charged under the Espionage Act with two counts related to the unauthorized disclosure and retention of national security information. In a statement, Albury’s attorneys said he "accepts full responsibility for the conduct set forth in the Information."

The Trump administration has made it a priority to prosecute government employees who leak classified information to the media. At a press conference in August 2017, Attorney General Jeff Sessions announced that the DOJ will review policies on media subpoenas in leak cases. Sessions said at the conference, “We are taking a stand. This culture of leaking must stop.” Albury is the second whistleblower to be charged under the Espionage Act during Trump’s presidency, following the indictment of former NSA contractor Reality Winner in June 2017.

On March 28, New York Daily News Albany bureau chief and state Capitol reporter Ken Lovett was arrested in the state Senate for openly talking on his cellphone in the lobby. Lovett claimed he was asked to leave the lobby by the Senate sergeant-at-arms, but refused on the grounds that Senate was not in session. Senate regulations typically prohibit the use of cellphones in the lobby, but this rule is not regularly enforced. Lovett was held in custody for approximately 45 minutes on charges of trespassing until New York Governor Andrew Cuomo bailed him out. Governor Cuomo told reporters: “We don’t believe any charges will be filed. Freedom of the press is alive and well in the city of Albany.”

Lovett is the first journalist to be arrested in the United States this year. According to the US Press Freedom Tracker, there were 34 arrests of journalists in 2017.

Trump tweets that The Washington Post should register as “lobbyist”

On March 31, President Donald Trump falsely stated on Twiter that The Washington Post is acting as a lobbyist for online retailer Amazon and should therefore register as one. This is not the first time President Trump has made this accusation; in a July 2017 tweet, he first expressed his concern that the paper was being used as a “lobbyist weapon” for Amazon’s advantage. While Amazon CEO Jeff Bezos has owned the newspaper since 2013, the company has no stake in The Washington Post and the news outlet operates independently. However, Trump has linked the two together multiple times, referring to the “Amazon Washington Post” in past tweets, and has made The Washington Post the subject of numerous other Twitter tirades. 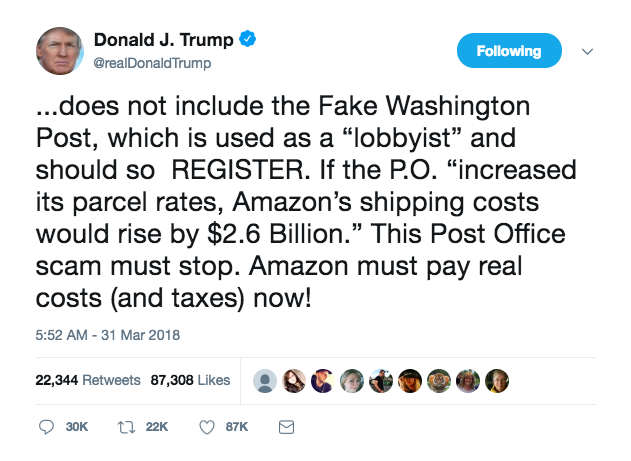 On March 31, Sinclair Broadcast Group’s anti “fake news” promos went viral after Deadspin, an online media outlet, released a video montage showing dozens of Sinclair anchors reading the same mandated script. Last month, CNN anchor Brian Stelter reported on leaked scripts for Sinclair’s promotional campaign, in which anchors on local affiliates for the broadcasting company denounced the media by using disparaging rhetoric such as “fake news,” a term commonly used by President Donald Trump to discredit major news outlets. At one point in the script, anchors are told to recite: “Unfortunately, some members of the national media are using their platforms to push their own personal bias and agenda to control 'exactly what people think' ... This is extremely dangerous to our democracy.”

CNN Money reported that the new mandate made many staffers feel “uncomfortable.” The edited video elicited negative responses from both the entertainment and media industries, which accused the company of spreading “pro-Trump propaganda.” Sinclair is the country’s largest broadcasting company, owning and operating almost 200 television channels throughout the United States.