Skip to main content
CREDIT: Fight For 15
RSF_en
Below are the most notable incidents regarding threats to press freedom in the US during the week of June 11-17:

On June 11, photojournalist for Truthdig Michael Nigro was arrested in Jefferson City, Missouri, while reporting on acts of civil disobedience taking place during an economic justice protest, where participants had linked arms and were blocking the street in front of the city’s Chamber of Commerce. Nigro was wearing press credentials and recording the incident when a police officer told him to get off the road and stand on the sidewalk. After approaching a different officer who also told him to return to the sidewalk, Nigro backed up but was still arrested and charged with “failure to obey.” He was released on a $545 bail later that day and his equipment was returned unharmed. Nigro believes he was arrested because he was a journalist. “When people are performing acts of civil disobedience, I have every right as a journalist to document it, as long as I am not in the police officers’ way, which I was not,” he said.

The White House restricted press access at the June 12 summit between the United States and North Korea. Only seven American journalists were included in the press pool during President Donald Trump and North Korean leader Kim Jong Un’s first meeting, an event of the type that would normally consist of a pool of about a dozen reporters from various news outlets including major wire services like The Associated Press (AP) and Reuters. For this meeting, such wire services were not permitted to attend. Later that day, Singaporean press was permitted to attend the lunch between Trump and Kim, but American press were excluded. It was not until a larger bilateral meeting later in the day that the American press pool was expanded to include reporters from the aforementioned wire services, though the pool size remained small. Lauren Easton, director of media relations for AP, released a statement on the press limitations: “AP is troubled by the decision to curb media access at the Singapore summit. … It is a disservice to the public, which deserves prompt, accurate and complete reporting on what may be one of the president’s most consequential meetings.”

In a June 13 tweet, President Trump claimed “the fake news” is the country’s “biggest enemy.” That this tweet came just a day after he “lavished praise” on North Korean leader Kim Jong Un was not lost on the American press. 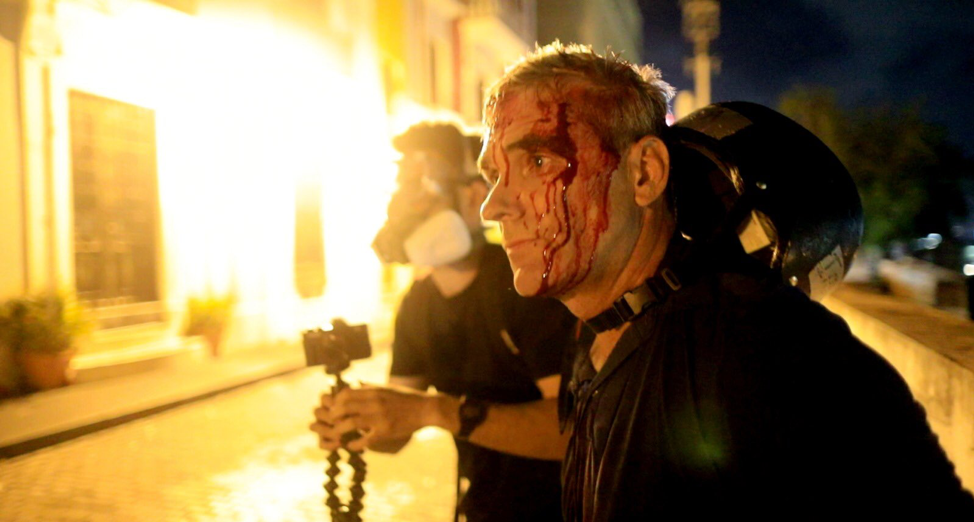 This inflammatory anti-press rhetoric has become commonplace for the president, who has tweeted about “fake news” 9 times in the past week, including a tweet referring to major news organizations as the “enemy of the people Fake News.”

High profile members of President Trump’s team, including Secretary of State Mike Pompeo and his 2020 campaign manager Brad Parscale, as well as political commentator Rick Santorum have denounced reporters’ critical questions as “insulting” and called for the suspension of press credentials. 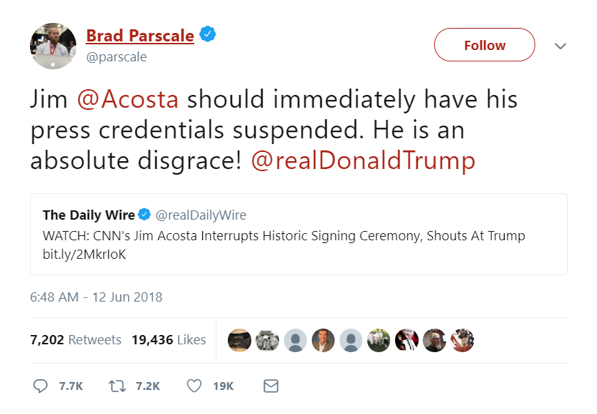 Parscale’s tweet refers to questions CNN Chief White House Correspondent Jim Acosta shouted at President Trump and North Korean leader Kim Jong Un at the signing ceremony about denuclearization of the Korean Peninsula and American citizen Otto Warmbier’s death after being released from North Korea’s custody. Washington Post columnist Margaret Sullivan tweeted her concern about the administration's latest treatment of the press, stating: “Just in past few days, Pompeo, Parscale and now Santorum offer the wildly anti-democratic view that reporters asking questions is out of line, insulting -- and maybe grounds for having press credentials revoked.” This isn’t the first time Parscale has called for Acosta’s credentials to be revoked. The CNN reporter defended himself in a June 12 tweet: “Dear Brad.. dictatorships take away press credentials. Not democracies.”

Customs and Border Protection (CBP) agent Jeffrey Rambo is being investigated by his own agency for misconduct after contacting New York Times reporter Ali Watkins last year to discuss her confidential sources. Watkins is the same journalist whose email and phone records were seized by the Department of Justice earlier this year as part of their leak investigation of James Wolfe, former director of security for the Senate Intelligence Committee. Rambo approached Watkins last year just as the Trump administration had announced its plans to aggressively pursue unauthorized government leaks to journalists. Rambo, who identified himself to Watkins as a government agent, met with the reporter and asked about her three-year romantic relationship with Wolfe and general questions about her reporting and source development. He brought to the meeting records gathered through Department of Homeland Security channels that showed proof of Watkins’ relationship with Wolfe, including records of their travels, and personal information about Wolfe’s former wives. Rambo’s search of travel records could be a crime if he didn’t in fact have clearance to access that data, which is protected by privacy laws and regulations that prevent unauthorized disclosures of personal information, officials said.

Pittsburgh Post-Gazette editorial cartoonist Rob Rogers was fired June 14 after 25 years at the newspaper. Prior to his dismissal, 19 of his cartoons had been rejected by either editorial page editor Keith Burris or publisher John Robinson Block since March, and Rogers says he’s experienced “a lot more pushback” on his work since Burris joined the team. Both Burris and Block have expressed right-leaning political opinions, and the newspaper’s editorial content has become increasingly sympathetic toward Trump. Rogers has garnered myriad support at both the local and national level, including Pittsburgh Mayor Bill Peduto who released a statement saying the firing “sends the wrong message about press freedoms in a time when they are under siege.” The paper has experienced problems with its management in the past; in a January 11 tweet the Post-Gazette informed readers that the publisher was requesting to remove Donald Trump’s vulgar language from a story about the president’s vulgar language.

The United States ranks 45th out of 180 countries in RSF's 2018 World Press Freedom Index after falling 2 places in the last year.