Skip to main content
RSF_en
Below are the most notable incidents regarding threats to press freedom in the US during the week of January 15 – 21:

RSF responded to Trump’s latest attack on the media with a “Bravo Donald!” campaign on social media that criticizes the president’s interpretation of the First Amendment.

The president sent out a tweet on the evening of January 17 with a link to all of his eleven “fake news” awardees on the Republican National Committee website. The article listed the awardees, stated how much the President had accomplished, and argued that the media should be covering more of those successes. 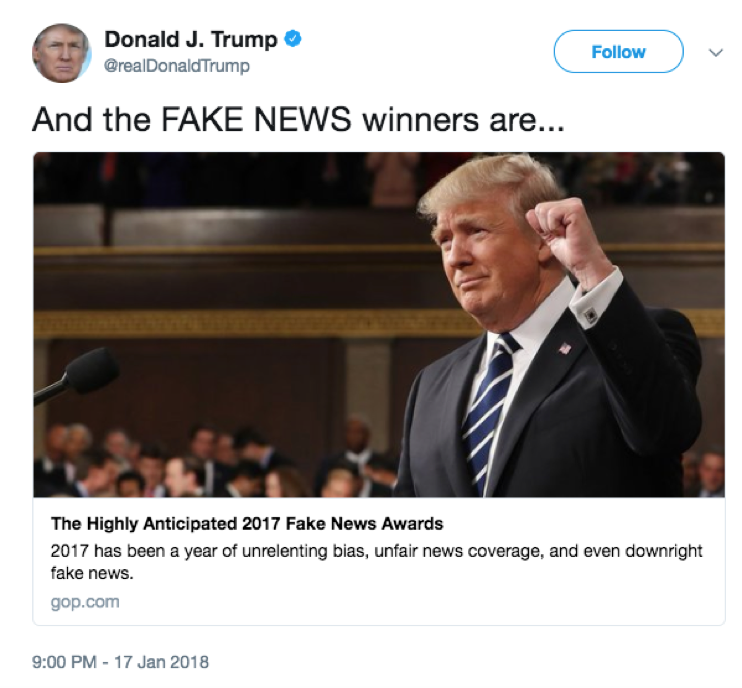 Following the release of the awards, Trump posted the link to the “fake news” article, he wrote a follow-up tweet praising the “good news.”

Shortly after, The Washington Post published an article fact-checking the President’s claims about the media’s “false” coverage and concluded that at least eight of Trump’s “fake news” winners issued corrections following their errors, two were inaccurate tweets that were quickly corrected, and one was an opinion piece for which the reporter later retracted an inaccurate portion predicting that the economy would never recover during Trump’s presidency.

On Jim Acosta’s second day as CNN’s chief White House correspondent, President Trump instructed him to leave the Oval Office after attempting to question the President about his immigration comments during a photo-op. 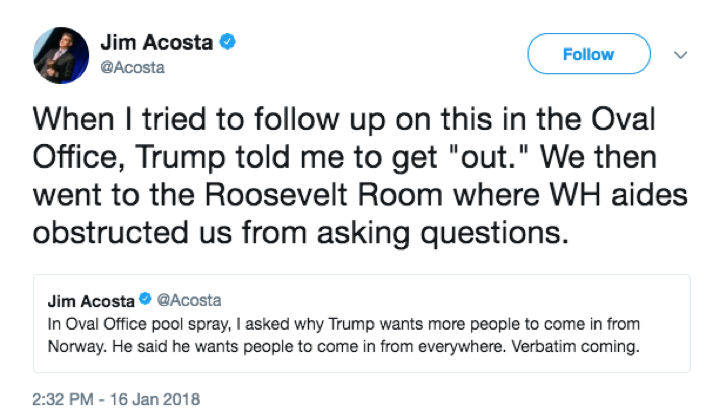 When Acosta attempted to ask a follow-up question as to whether Trump wanted more immigrants from white countries, the President simply pointed at Acosta and said, “out.” The meeting ended shortly thereafter. 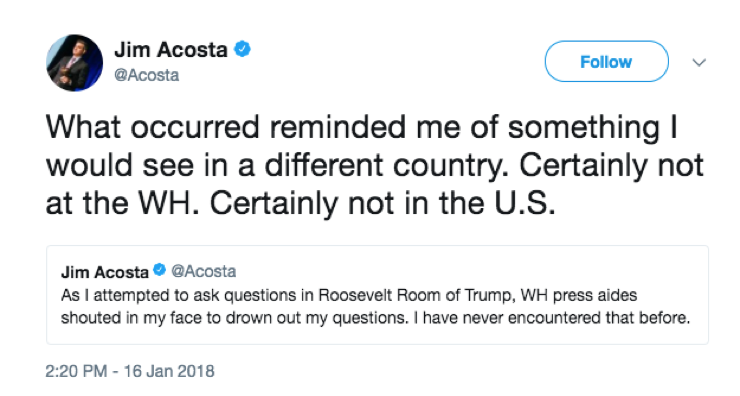 Trump has targeted CNN multiple times throughout his presidency, calling out several of its journalists for reporting “fake news.” He has also retweeted violent memes in the past that targeted CNN.

Brandon Griesemer was arrested on Friday January 19 after calling CNN with multiple threats. He made a total of 22 calls on January 9 and 10, where he threatened to kill employees at the network’s Atlanta, Georgia headquarters. During one such call, he said: “Fake news. I’m going to gun you all down.” The same day of his arrest, he was charged with intent to extort and threat to injure and released on a $10,000 bond. If convicted, Griesemer could face a fine or up to five years in prison. In a statement, CNN said, “We take any threats to CNN employees or workplaces, around the world, extremely seriously. This one is no exception.” President Trump has repeatedly targeted media outlets, but in particular CNN, with the “fake news” label, and has retweeted at least three violent memes depicting violence against the network.

The US Attorney’s Office for the District of Columbia has dropped felony charges against 129 protesters involved in mass arrests during the day of President Trump’s inauguration last year, according to court documents filed on Thursday January 18. There is still a group of 59 people facing criminal charges, including a New Mexico-based journalist named Aaron Cantú. Cantú started his trial in October of last year and is facing up to 70 years in prison for multiple charges including inciting to riot, rioting, conspiracy to riot, and five felony charges of destruction of property. Lawyers for Cantú filed a motion on Friday to dismiss these charges, arguing the arrest was a breach of Cantú’s First Amendment rights as a journalist. Alexei Wood was another journalist who faced charges for live-streaming the same protests, before being cleared last month. Eight journalists were initially arrested on January 20, 2017 but all but Cantú have since had charges dropped against them or were cleared at trial.

Jeff Flake, a Republican Senator from Arizona, attacked the president’s treatment of the press and compared the American president to Soviet dictator Josef Stalin during his remarks on the Senate floor on January 17. Arizona Senator John McCain wrote an op-ed in The Washington Post on January 16 where he criticized the president for attacking the press. McCain claimed Trump’s commonly used phrase “fake news” “is being used by autocrats to silence reporters, undermine political opponents, stave off media scrutiny, and mislead citizens.” President Trump has yet to directly respond to the attacks made against him by both Flake and McCain.

Knight Foundation published a survey on Tuesday, January 16 about Americans’ opinions towards the media. The 2017 Gallup/Knight Foundation Survey sent out a mail survey to more than 19,000 US adults aged 18 and older. The results showed that more than 8 in 10 US adults believed that the mainstream media have a prominent role to play in democracy, but believe the media is not fulfilling that role. They also showed that media trust is highly influenced by partisanship with a significantly high number of Democrats who trust the media while Republicans do not.

The results evidence long-standing trends seen within multiple presidencies; however, what is unusual under the current administration is that Americans cannot agree on the definition of “fake news.” Democrats agree on the original meaning of “fake news” as referring to false or misleading information, while Republicans lean more towards President Trump’s interpretation of the term which delegitimizes the press.