Skip to main content
RSF_en
Below are the most notable incidents regarding threats to press freedom in the US during the week of February 19 - 26:

During the first two days of the Conservative Political Action Conference that began February 22 in Oxen Hill, Maryland, Sebastian Gorka, a former White House advisor to President Trump, attacked and insulted reporters that he believed were “irrelevant,” “fake news,” or that he believed to be unpatriotic. On February 22 during the conference, a video showing Gorka physically assaulting Mediaite reporter Caleb Ecarma by shoving him and then telling him to “f**k off” went viral on twitter. After the video was shared, multiple reporters from liberal news outlet ThinkProgress tried to ask Gorka questions about the assault, but he wouldn’t acknowledge the reporters. He did however talk to a conservative-leaning news organization called the Daily Signal. That same day, Freedom of the Press Foundation came into possession of an audio recording of Gorka telling a journalist, “you are the epitome of fake news. You are wasting your time here, cause we’re patriots here. We don’t want to destroy the country, or hang out with people like yourself who don’t like this country.” Gorka left his White House position in August 2017 and resumed his prior role at Breitbart News as an editor for national security affairs. He is currently a national security analyst at Fox News. According to the US Press Freedom Tracker of which RSF is a partner, there have been at least three physical attacks against journalists in 2018, the most recent targeting PIX11 reporter Howard Thompson and photographer John Frasse on February 6.

Mike Faulk, a journalist with the St. Louis Post-Dispatch, filed a lawsuit on February 23 against the city of St. Louis and nearly a dozen St. Louis police officers. In the lawsuit Faulk alleged he was assaulted when he was arrested on September 17, along with at least 10 journalists arrested or detained by St. Louis police, while covering a three-day long protest after a white police officer Jason Stockley was acquitted in the death of Anthony Lamar Smith, a black motorist. Faulk was held for 12 hours before he was released and told he would be charged with “failing to disperse,” yet charges have not yet been formally filed against him. In Faulk’s suit, he claims that a police officer tackled him to the ground and crushed his head into the pavement with a boot, while another officer sprayed Faulk’s eyes with pepper spray. He also argues that he identified himself as a reporter to the police, yet was still arrested. He said the incident caused him to suffer from psychological complications, such as having nightmares of being surrounded, and he has since taken medical leave from the St. Louis Post-Dispatch and has not returned since January. According to the US Press Freedom Tracker, there were a total of 34 journalists arrested in 2017, most of which occurred while reporting on protests.

CNN held a town hall on February 21 for the victims of the Marjory Stoneman Douglas High school shooting in Parkland, Florida that happened on February 14. The victims were invited to voice their concerns about gun safety and the need for legislation to prevent gun violence. TVNewser reported that nearly three million people tuned into the town hall, yet President Trump heavily criticized the CNN’s event on Twitter. 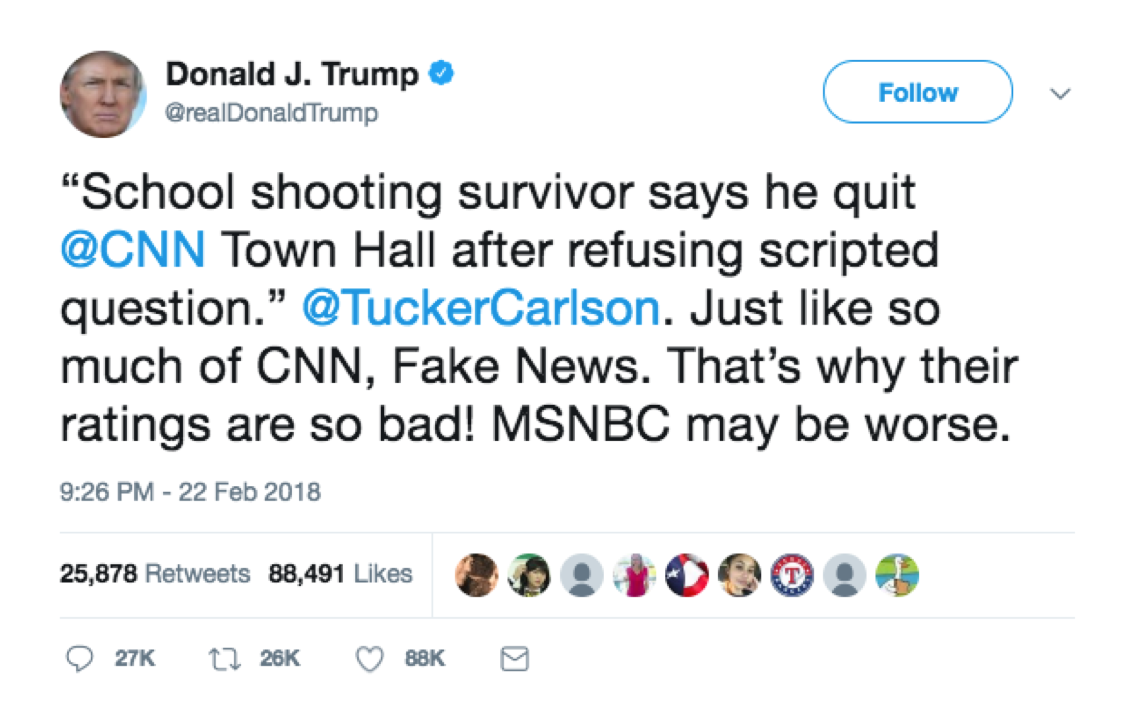 On February 23, Business Insider received email exchanges between CNN and Colton Haab’s father, Glenn Haab, from a CNN source. The exchange appeared to show that Glenn falsified information by doctoring emails to show that CNN scripted Colton’s question. In one exchange, CNN executive producer Carrie Stevenson told Glenn that Colton needed to stick with the question that Stevenson and Colton "discussed on the phone that he submitted." The email that Colton shared with Fox and HuffPost contradicts the email that CNN gave; Glenn’s email deleted the phrase, “that he submitted.” A CNN spokesperson told Business Insider, “It is unfortunate that an effort to discredit CNN and the town hall with doctored emails has taken any attention away from the purpose of the event. However, when presented with doctored email exchanges, we felt the need to set the record straight.”

A National Rifle Association (NRA) spokeswoman, Dana Loesch, who also appeared at the town hall, attacked the press the following day during a speech she gave at the Conservative Political Action Conference: “Many in legacy media love mass shootings. You guys love it. Now I’m not saying that you love the tragedy. But I am saying that you love the ratings.” The NRA released a video on one of their Twitter accounts on February 21 again placing blame on the media, titled “The Media Love Mass Shootings.”

President Trump took to Twitter to express his distaste for how the media has been covering the 13 indictments in the investigation into Russian interference in the 2016 election. He again tried to place blame on “Fake News” coverage for overlooking what he argued was a tougher stance on Russia than his predecessor. 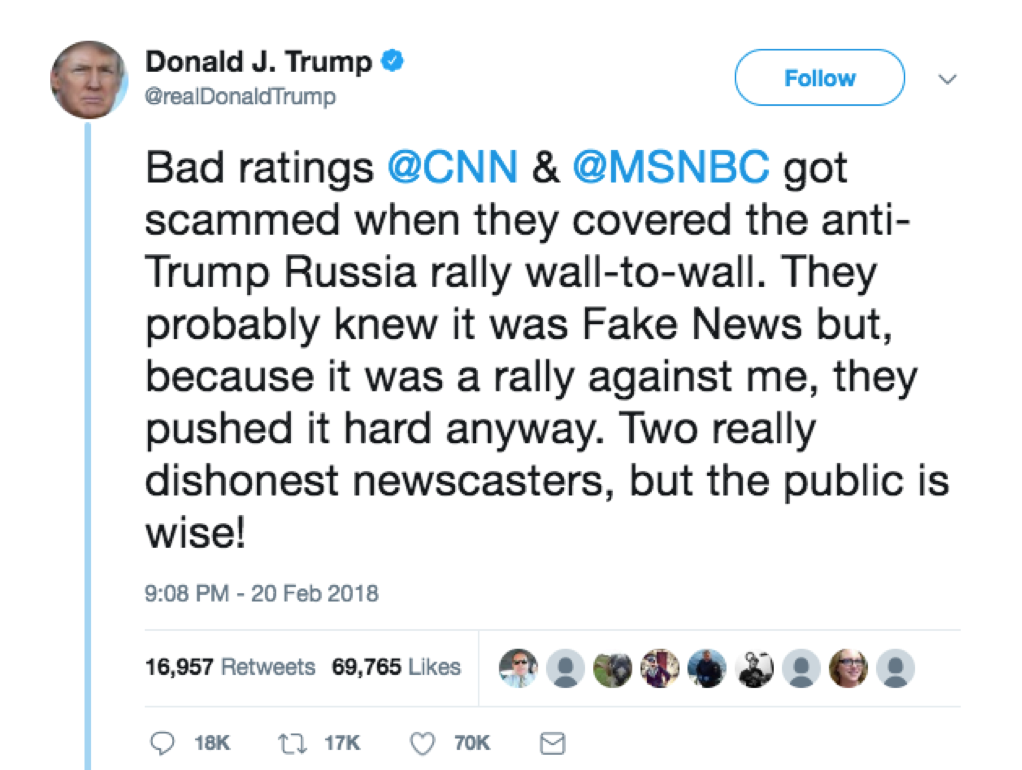 Trump has previously targeted CNN for its coverage of his presidency, featuring the outlet in his “Fake News Awards” published in January.

Trump also criticized The Washington Post for covering the story of Rachel Crooks, a woman who claimed that the president sexually assaulted her by kissing her on the lips without her consent in 2006. 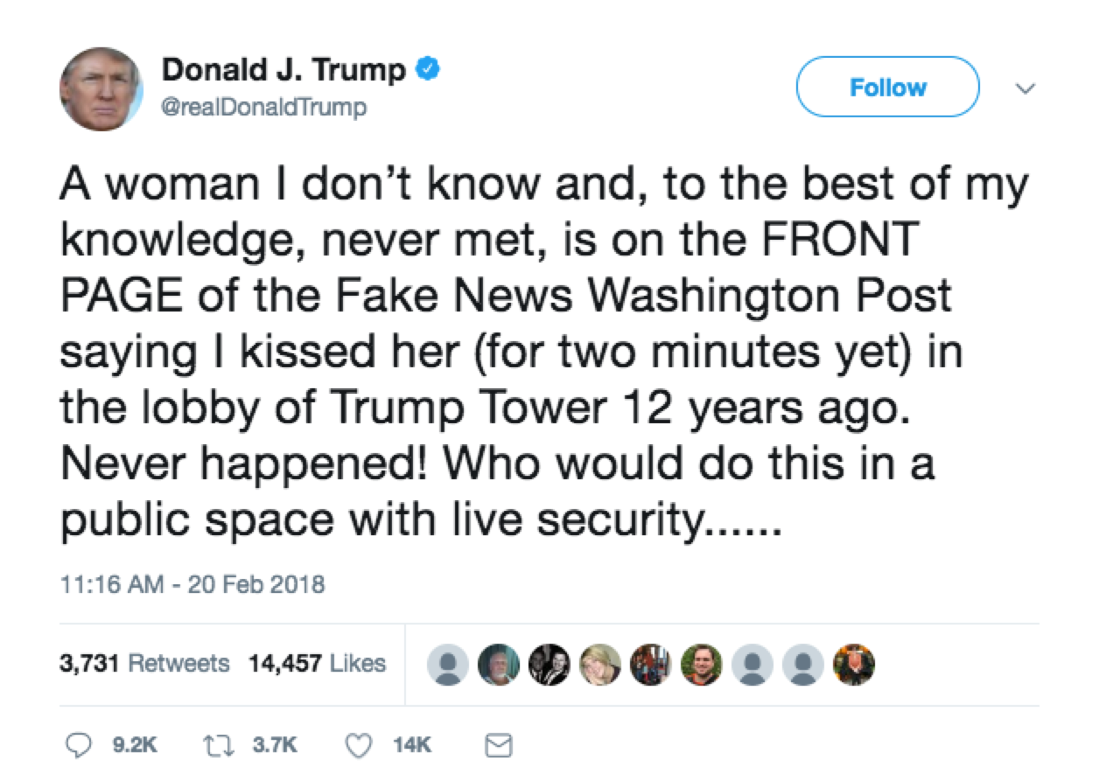 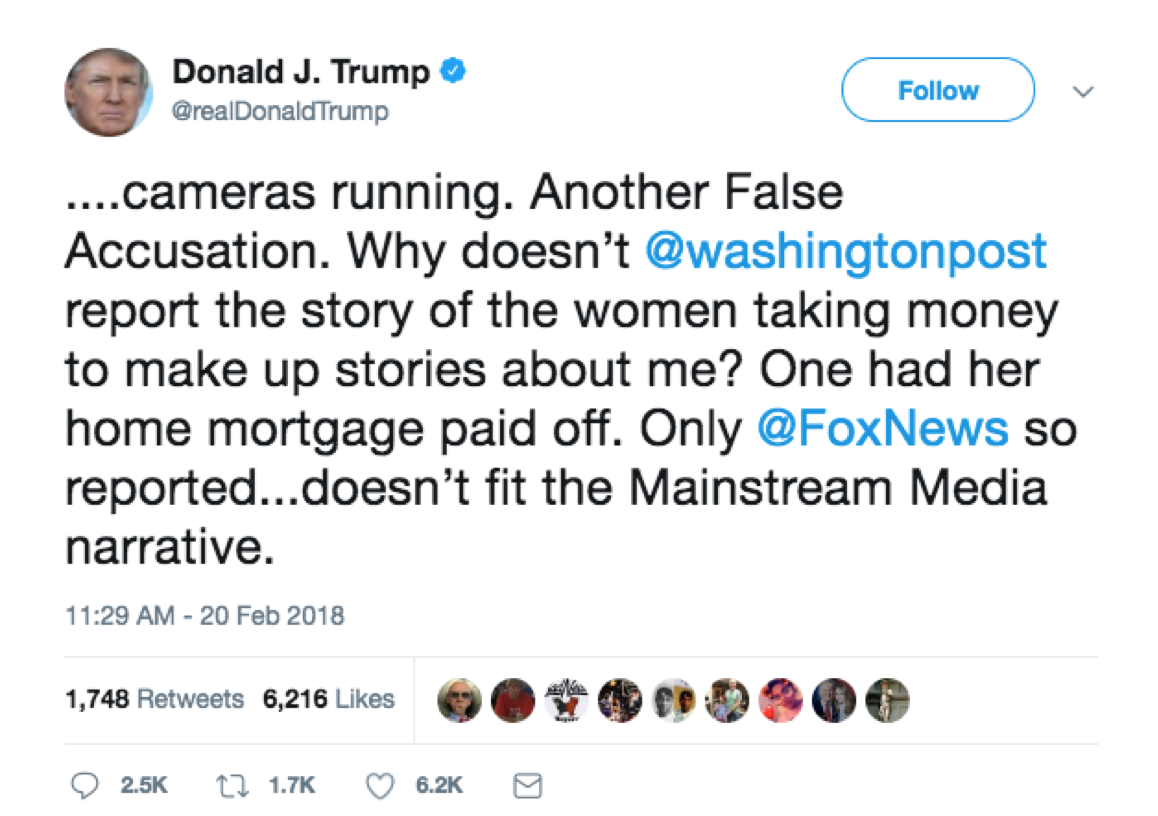 On February 23, the New York Times published an op-ed entitled “Tyranny of the American Visa Regime,” detailing the difficulties some journalists face when traveling to the US due to the nature of their work. The author, James Harkin, is an Irish journalist who has contributed to The Guardian, The Atlantic, and Vanity Fair, among others. In his op-ed, Harkin detailed his personal struggles getting his US visa application approved after reporting on Syria and Iraq for the past five years, stating he is now banned from Turkey, unable to enter the United States, and unable to receive a journalist visa from the Syrian government. “A growing number of journalists and academics are finding themselves unable to report and conduct research across the world as prickly governments use travel bans and visa delays — often in the name of national security — to limit their movements and block their entry,” he wrote. “Syrian and Turkish governments frequently deny passports to intimidate and humiliate their own citizens, and to deter journalists from writing uncomfortable things. I had expected better from the United States.”

In the article, Harkin mentioned the cases of Spanish journalist and historian Manuel Martorell and British journalist Karl Penhaul, who were both unable to travel to the US due to their reporting on Kurdistan and the FARC rebels in Colombia, respectively. Reporters Without Borders has been advocating that their visa issues be resolved.

The piece acknowledges that while many of the journalists unable to travel to the US were barred from doing so under the previous administration, President Trump’s outward hostility to the press and hard-line stance on immigration have made it even more difficult for journalists to enter the US, at times impeding their ability to work as reporters.

Former President Barack Obama spoke at an event hosted by the Massachusetts Institute of Technology (MIT) in Boston on February 23. An email sent to all attendees prior to the event stated: “Following the panel, the sharing or reporting of its contents on public platforms, including social media, will not be permitted. Those who fail to adhere to this policy will be subject to removal from the conference and denied tickets to future Southern States Athletic Conference (SSAC) conferences.” A second email clarified that the policy applied to media outlets, even those credentialed to cover the event, after The Boston Globe inquired further about the restrictions. Though Trump has been frequently criticized for his lack of press access, his predecessor left behind a disappointing legacy towards the media. During his time as president, Obama was frequently criticized for lack of government transparency and poor press access.