Skip to main content
Nouakchott from the sky, Mauritania capital city
RSF_en
Reporters Without Borders (RSF) condemns a Mauritanian prosecutor’s decision to bring criminal charges against two online journalists in a defamation case that should be handled under the 2010 press and publications law, which excludes prison sentences. The decision is all the more disappointing after the progress in respect for media freedom that Mauritania had made in recent years.

Jedna Ould Deida, the editor of the Mauriweb.info website, and Babacar Baye Ndiaye, the webmaster of the Internet portal Cridem.org, were accused of defamation in a complaint filed by President Mohammed Ould Abdel Aziz’s son, Badr Ould Abdel Aziz, on 6 April, after reports alleged that he fired a shot at a shepherd.

Deida and Ndiaye were arrested on 7 April, after being summoned to the headquarters of the judicial police, and were released on bail the next day. The case is due to be heard tomorrow. According to the prosecutor, the journalists were “caught in the act of committing a crime,” displayed intent to cause prejudice and acted with premeditation – all crimes under the penal code. But he has also cited the press law, under which journalists may only be fined. No one knows how he plans to reconcile the different legal provisions.

“Journalists should never be the subject of a criminal prosecution for actions stemming from the practice of their profession,” said RSF’s Constance Desloire. “The prosecutor should refer solely to the 2010 National Law on Freedom of the Press and Publication.”

From the outset of tomorrow’s hearing, Deida and Ndiaye plan to demand a proper investigation, which could not have been carried out in the five days between their arrest and the hearing. They also plan to request that the shepherd be called to testify because, to their knowledge, there has been no other investigation into the alleged shooting incident. “My clients are facing the possibility of six months to five years in prison,” their lawyer, Ahmed Baba, said. “This case has begun badly with a violation of the law. I fear that it may continue the same way.”

The arrest of Deida and Ndiaye and the manner in which they are being prosecuted confirm the erosion of media rights that began with the death sentence passed in 2014 on a blogger convicted of apostasy. “We regret their arrest all the more keenly because no professional journalists had been detained since 2011,” Desloire added. 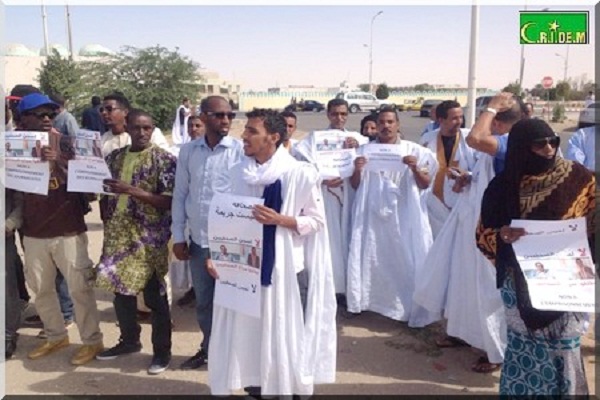 Journalists’ associations and press unions quickly organized a march in protest against the arrest of Deida and Ndiaye and accused the authorities to trying to intimidate journalists. “We have made a great deal of progress in Mauritania and the environment in which journalists now work is more or less acceptable but the judge acted hastily in this case because it concerned the president’s son,” said Ahmed Mokhtar Salem, the president of the Union of Mauritanian Journalists.

Mauritania is ranked 55th out of 180 countries in RSF’s 2015 World Press Freedom Index.