Skip to main content
RSF_en
Reporters Without Borders (RSF) notes that some nations that lead the world in hostility to media freedom are also near the top of the Rio de Janeiro Summer Olympics medal table. They include China and Russia, which are 3rd and 4th respectively in the medal table and are 176th and 148th respectively in RSF’s 2016 World Press Freedom Index.

“Sports performance is unfortunately no guide to the state of media freedom in a country,” RSF editor-in-chief Gilles Wullus said. “Some countries, such as China, Russia, Cuba, Uzbekistan, Kazakhstan and Iran win many medals but these medals cannot hide the fact that they also top the league of the world’s biggest enemies of independent journalism.”

Cuba is 18th in the medals table but 171st out of 180 countries in the World Press Freedom Index.

Uzbekistan, Kazakhstan and Iran finished 21st, 22nd and 25th respectively in the Olympic medal table but are all near the bottom of the Index (166th, 160th and 171st respectively) and their rankings have worsened steadily since RSF launched the Index in 2002.

Conversely, RSF notes that some countries that do not figure in the Rio medal table nonetheless have good rankings in the Index. They include Costa Rica, which is 6th in the 2016 Index, Namibia (17th), Surinam (22nd), Ghana (26th), Cyprus (27th) and Samoa (29th).

Compiled and published annually by RSF since 2002, the World Press Freedom Index ranks 180 countries according to the degree of freedom enjoyed by journalists. 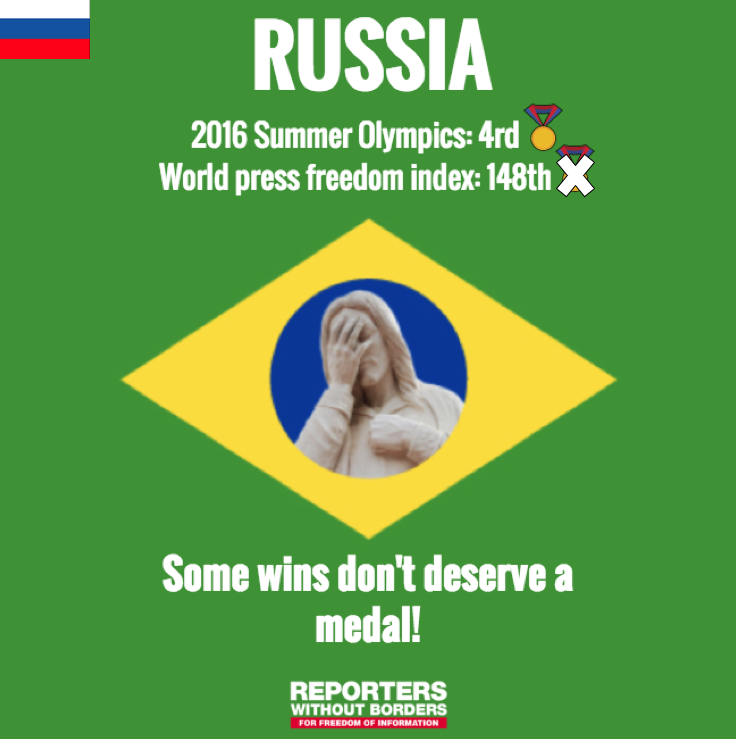 During the Rio Olympics, RSF conducted a campaign called “Some wins don’t deserve medals” that was produced jointly with the international branding agency Cheeeeese. The campaign aimed to make Brazilian society and the international community more aware of the dangers for journalists and to put pressure on the authorities to take concrete measures to protect them.