Skip to main content
RSF_en
Reporters Without Borders (RSF) condemns the Thai military junta’s censorship of Pravit Rojanaphruk, an outspoken journalist who has been denied permission to travel to Finland to attended a UNESCO event in Helsinki on 3 May marking World Press Freedom Day.

Pravit, who is very critical of the junta in his articles, has been detained twice in the past in a “behaviour adjustment camp,” where he was forced to sign a pledge to seek permission from the authorities whenever he wants to travel abroad.

His request to attend the Helsinki event was refused by the junta, called the National Council for Peace and Order (NCPO), on 30 March. An army colonel told foreign journalists that Pravit “keeps violating the orders of the NCPO” and keeps “attacking” it in his online posts.

On behalf of the Finnish foreign ministry, which invited Pravit to attend the event, the Finnish ambassador said it was “very regrettable” that he was not being allowed to travel. 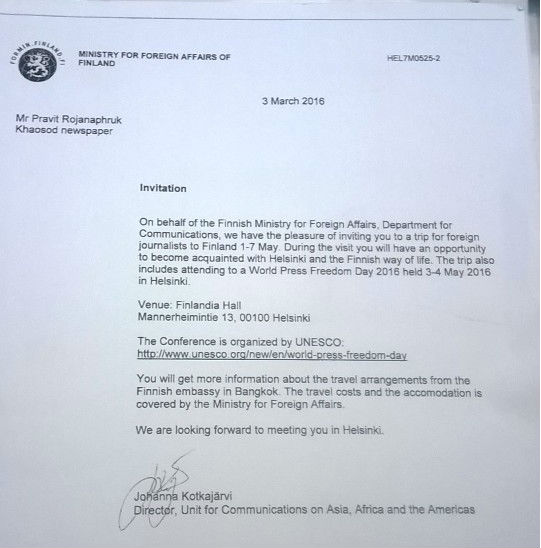 “This blatant violation of this independent journalist’s freedom of movement, a basic freedom, will have consequences,” said Benjamin Ismaïl, the head of RSF’s Asia-Pacific desk.

“As it is highly likely that he will be able to participate by videoconference or by emailing an address or statement in English to UNESCO in Helsinki, we will translate what he says into French and Thai and will use our networks to distribute it in three language to as many media outlets as possible in Europe, the United States and Southeast Asia, including obviously Thailand. And if possible, we will also use it for awareness campaigns about freedom of information. We will give the junta and its chief, Gen. Prayut Chan-ocha, a lesson in the Streisand effect.”

The Streisand effect is what happens when an attempt to suppress content or opinions backfires and results in their getting much more attention. It is named after US singer Barbara Streisand, whose lawsuit against a photographer in 2003 resulted in more than half a million Americans seeing the photo of her home that she wanted suppressed.

Ranked 134th out of 180 countries in RSF’s 2015 World Press Freedom Index, Thailand has seen drastic curbs placed on media freedom since the military staged a coup in May 2014.

On 12 November 2015, RSF issued a report on the situation in Thailand 18 months after the coup. Entitled “Media hounded by junta since 2014 coup,” it urges the Thai authorities to stop using the threat of lèse-majesté charges and to repeal all draconian media legislation, including criminal code article 112, the criminal defamation law and the Computer Crimes Act.